On Friday, March 29, I went to the first class in the Advanced Home Chef Series hosted by Cook Culture.  David Mincey—formerly of Camilles restaurant and now with Preservation Chocolates—teaches this nine class series. The theme of the first class was the fundamental building blocks of taste, which are sweet, salty, sour, bitter, and umami.

David started by telling us what to expect from the classes. Obviously, they will be a lot of fun, he said, but went on that he does not teach through recipes. This is the opposite of what happens if you watch the food network, or have taken other classes. Instead of guiding you by using recipes, David teaches his students proper cooking techniques and a good knowledge of food theory. He likes to taste the food frequently as he cooks to check “building block” balances. He also explained  that he tends to cook on a whim. David only brought some locally butchered pork tenderloin and wild Claytonia Perfoliata (also called Miner’s Lettuce that he had picked earlier in the day) with him; everything else would have to be found in the Cook Culture kitchen. David says he likes to cook with what he has on hand rather than having to follow a recipe and go out to the store to shop. He started by going through the Cook Culture fridge. He found some potatoes, cilantro, bacon (he was excited by this find), plums, and vegetable stock as well as some pecans that he immediately started toasting in the oven. This would be the basis for the three dishes he would cook that night.

Salad atop a Flan made with wild Claytonia Perfoliata (also called Miner’s Lettuce that David had picked earlier in the day) and a mustard dressing.

Once all the ingredients had been gathered, David looked everything over and decided he would make a soup first. He chose soup, he explained, because it is easy to make and he could purposely leave out all the flavour building blocks. This would allow us to taste it without them, and then he could show us how to properly identify and add in what was missing. Then he went to work. In a blender, he added the corn to some vegetable stock, and added some onions that he had started sautéing before we’d arrived. 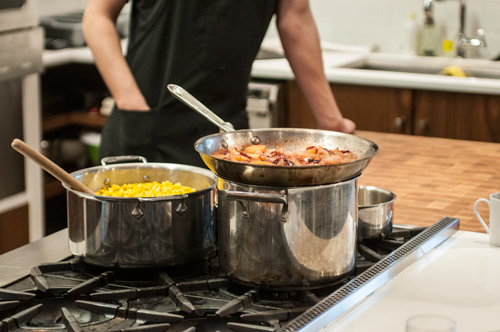 Corn heating up for the soup with vegetable stock bubbling under pickled plums.

Once done, he passed out samples of the soup to taste. It was exactly as David said it would be: corn and vegetable stock. Nothing special, just lots of raw corn flavour, but not in a good way. Next, he added ingredients that would satisfy the elements of taste. One of the first things he used shocked a couple people in the class, because of how much it could theoretically change the way it tasted. He added vinegar, and not a little bit, quite a lot for the amount of soup—he was really pouring it in. He then added a handful of sugar to the soup so that it would balance the vinegar while he jokingly said “don’t watch how much sugar I add, it might scare you.” After a few more additions of cilantro, soy, and salt and then blending the soup again, he handed out more samples to try. The new and improved soup was amazing. It didn’t taste dull or lifeless. The corn was full flavoured, as if it was freshly husked and just added, the vegetable stock now tasted as if it had been simmering for days rather than hours. You couldn’t even tell that there had been items added; the consistency and colour remained the same. Everyone was amazed at how a few things that are so simple (vinegar (sour), sugar (sweet), cilantro (bitter), soy (umami), and salt) could change the entire dish, taking it from one extreme to another.

David’s future classes will focus on a broad range of topics: stocking your pantry; creating a whole dinner using chocolate as a main ingredient; cooking/using local ingredients; plating and presenting dishes— Most of the people at the fundamental class were excited by the plating, it sounds like David will make it a lot of fun and it should help a bit with dinner parties!

The final dish of the night: Paprika crusted pork tenderloin on a potato salad with pickled bacon bits and topped with plum relish.

After the first class in the series, I was impressed by how much I learned. It was beneficial in my own home cooking attempts and over this past week, my cooking has improved with using some of the techniques and ideas that David taught us. And although my cooking is getting better, I still can’t clean-up as fast as David and his assistants did that night. I wonder if kitchen clean-up is in the curriculum? 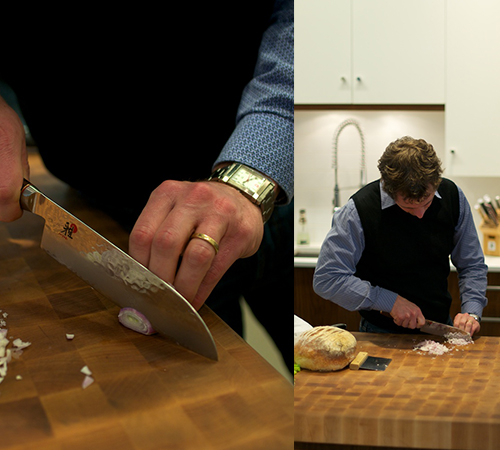 Cook Culture owner Jed showing off the new Myabi Artisan knife that each student receives when they sign up for the David Mincey cooking class series.

There are still spots available to join me for many of the different classes  in this series. As well Cook Culture has other cooking classes taught by a range of chefs with different cooking styles.

To register or for more information go here

You can also go into Cook Culture and talk with one of the staff about the classes at:

With Phase 2 beginning, restaurants and patios, tasting rooms and coffee shops are reopening. This is an ongoing process, with many changes, so we ...
Read More
Follow the ...
Read More