It’s the middle of February and Gabe Epstein has a large basket of home-grown vegetables on his kitchen table. While the potatoes and garlic are from his fall harvest, the parsnip, chard, kale and Brussels spouts were collected earlier that week. A proud grin extends across his face as he discusses how the food one personally grows just seems to taste that much better than store bought items. Of course they’re often fresher, but he adds that there’s also something extremely rewarding and satisfying about cultivating produce from your backyard.

But Epstein has done so much more than simply providing fresh food for his wife and himself with their backyard bounty. What started as a hobby for this retired schoolteacher has now blossomed into a forum for connecting an entire community through gardens. As one of the coordinators of The Gorge Tillicum Urban Farmers (GTUF), a neighbourhood food producing and food security group that began in 2008, Epstein has worked tirelessly to unite localized individuals with a shared interest for growing food through friendly discussion, meetings, seed banks, information sharing and above all, support. Epstein remarks that gardening can often be an intimidating task, and knowing that there are friendly faces who can offer advice and resources makes for a more approachable process – an extension on what he calls “the days when neighbours would ask for advice over their backyard fences.”

Because of his outstanding work with GTUF, Epstein has received recognition through The Capital Region – Food and Agriculture Initiatives Roundtable’s (CR-FAIR) 5th annual Food and Agricultural Championship Awards. He was also one of six recipients who accepted accolades at a presentation made at the 2012 “Seedy Saturday”, on February 18 at the Victoria Conference Centre. Along with awards acknowledging contributions in the local farming community, food provisions, the business community, government initiatives, and special recognition, Epstein has been honoured for his contribution to urban agriculture initiates through the work he has done with GTUF, whereby their uncomplicated but effective model has grown and spread to Vic West (VWUF), Jubilee (JUF) and Hillside Urban Farmers for Sustainability (HUFFS).

CR-FAIR coordinator Linda Geggie, says that this amazing growth is due to the approachable, friendly and involved nature of Epstein, who not only teaches by example, but also acts as a positive cheerleader for all communities looking to get more involved with urban agriculture. Simple, concrete and positive, Geggie explains that Epstein demonstrates amazing leadership skills through his ability to show what it truly means to work together with those around you. 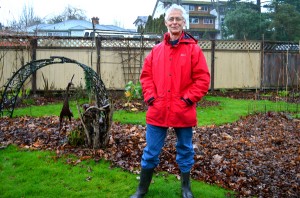 While Epstein agrees that he is a true believer that many minds are better than one, he extends that thought by attributing the success of GTUF to the open nature of their group, whereby projects and initiatives arise through conversations and do not require the action and support of every single member. Rather, GTUF allows members to participate as much or as little as they would like, and definitions and restrictions are avoided so that it is simply a space for positive, friendly, fun and transparent support. By not implementing requirements for particular classifications or agreements, GTUF eliminates debates, offers diversity of style, and above all, promotes the one reason they’re all involved – to generate discussion of the positive effects of urban agriculture. In so doing, members develop a stronger sense of community and neighbourliness.

While GTUF avoids any specific definition of “food security” they draw on explanations provided by the Vancouver Island Health Authority (VIHA), the BC Food Systems Network, and the Federation of Canadian Municipalities, which promote healthy agricultural and food system practices that allow for complete access to “nutritious, safe, personally acceptable and culturally appropriate foods” as described by GTUF’s urban farming handbook. This concept has even pushed members past their own gardens as they have developed programs that work to produce food for those with less access to fresh and nutritional produce. Through conversations around the cultivation of food, group members often find themselves thinking outside of the fence, so-to-speak, as they consider bigger picture issues of water systems, local versus imported goods, and of course the overall effects of climate change.

While Epstein takes particular joy when GTUF members extend their focus to these worldly issues, at the end of the day he is proud and happy knowing that he’s made a difference in his immediate community with friendly dinner parties, music and poetry slams, open houses, harvest block parties, and tool swaps. “It may be simple,” he says with that same proud grin, “but it works.”