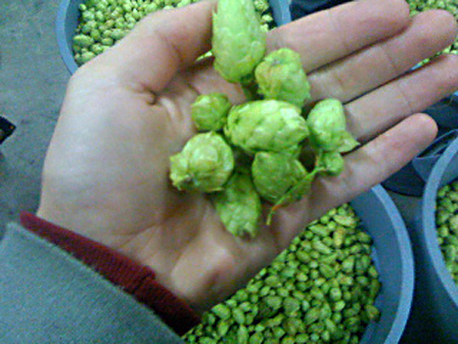 A few weeks ago I received an invitation to witness the recreation of  one of my favourite beers of 2009, Driftwood Brewing’s Sartori Harvest IPA. I’m unabashedly enthusiastic about great beer, so accepting was a no-brainer. I arrived at the brewery with my similarly affected friends in tow, finding brewmaster/“wizard of wort” Jason Meyer preparing for the first of three additions of fresh Centennial hops.

Hands were shaken and names exchanged, and before long we were being lead into the gigantic walk-in refrigerator to sneak a peak at the featured ingredient. While impressive, the sight of 200 pounds of freshly picked hops paled in comparison to their signature floral aroma, which could only be described as intoxicating. The hops were collected by Mr. Meyer himself the previous day from the Sartori Ranch near Chilliwack, and though their locality is appealing, it’s their freshness that makes them so special.

Fresh hop beer revolves around the hop harvest, which occurs but once a year. Hops are volatile, and will spoil if not either used or dried shortly after being picked. A recent influx of interest in craft brewing has allowed brewers to delve further into the possibilities of beer’s primary ingredients (water, yeast, barley and hops). And just like how Pizza Hut can’t sleep at night because it is perpetually conjuring new places to put more cheese, brewers from the Northwest have tasked themselves with finding new ways to incorporate hops into their creations. That said, it was only a matter of time before beer gurus started incorporating the hops when they are at their peak. Last year’s batch was quickly swallowed up by the frenzied beer fiends of Vancouver Island and Vancouver, so this year they’ve opted to make more in hopes that the beer will make more people happy, or the same people even happier. Bottling of this tasty brew is set to take place Friday September 24th, meaning it should be on shelves early this week.

September|October issue on the stands. Read ...
Read More
August 22, 2022 — Staff, volunteers, and board members from Victoria’s Belfry Theatre have raided some of the best local wine cellars to find ...
Read More
With Valentine’s Day comes cake! And flowers. And many other gifts that are made consciously and locally. On Feb 14th, I visited Taryn Haywood as ...
Read More