It’s the weekend Victoria whisky lovers wait for all year, an event that sells out months in advance, an occasion worthy of dusting off the ol’ kilt and sporran. Yes, the Victoria Whisky Festival descended upon us once again, hosted by the elegant –– and I might add, brave –– Hotel Grand Pacific. If you’re a fan of single malt, bourbon, Canadian rye or anything in between, then you were most likely there (or wishing you were). For those of you contemplating next year’s tickets, maybe this will whet your palate. 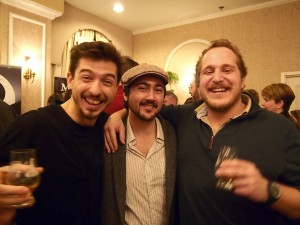 One hundred and eighty different whiskies from around the world were available at Saturday night’s Consumer Tasting, representing Scotland, England, Wales, Canada, USA, Japan, India, and Australia. Bottles glistened under the chandelier lights, glasses clinked, kilts swished. Somebody called me “lass” and I was thrilled. Across the marble floored lobby, a meat and potato-heavy spread was laid out in The Mark, with bite-sized Haggis Tarts, mini Shepherd’s Pies, Lamb Meatballs, and Sparkle Cookies. Wisely, bottled water was never far from reach. I ate first, thinking I’d need stamina to complete my journalistic obligation to taste as many different whiskies as possible (so as to present a thorough report, of course).

Now, back to the Tasting Room. One standout included Whisky Maker John K. Hall’s Forty Creek portfolio, which earned a slew of top honours at this year’s festival. I tried the Confederation Oak and loved it. Though most Canadian whisky is typically associated with rye, Hall’s Forty Creek Confederation Oak is actually made from a ‘meritage’ of Canadian corn, malt, and rye, all aged separately in Canadian oak barrels, then combined and aged together. On the other end of the room, I sampled White Owl Spiced Whisky, which is filtered until it’s completely clear, aged for 10+ years and infused with cloves and vanilla.

The Scots were, of course, represented in full force, as guests more discerning than I flocked to the booths where the finest reserves were said to be pouring in limited quantities. Laphroiag Master Ambassador Simon Brooking gave interactive introductions to the Islay distillery’s process, inviting guests to chew on dry malt as he lit a peat ball on fire, swirling the smoke towards our noses before pouring tastes of the Quarter Cask.

A cameo from the members-only Scotch Malt Whiskey Society was one of the crowd favourites. The exclusive club acquires “only single cask, single malt whiskies that promise to intrigue, entertain, and delight…” Rather than labelling the bottles by what they are (a Bowmore 16 year cask, for example) the SMWS uses a numerical code system and quirky-yet-fitting names are coined by the blind tasting panel, such as “Flowers On The Breakfast Table” and “Dab It Behind Your Ears”. Dab it behind my ears? Well, that sounds like a waste.

July|August issue on the stands. Read ...
Read More
Before the opening of Saint Franks, social media let out a collective groan when the new bar was rumoured to be a gourmet hot dog/bourbon joint where ...
Read More