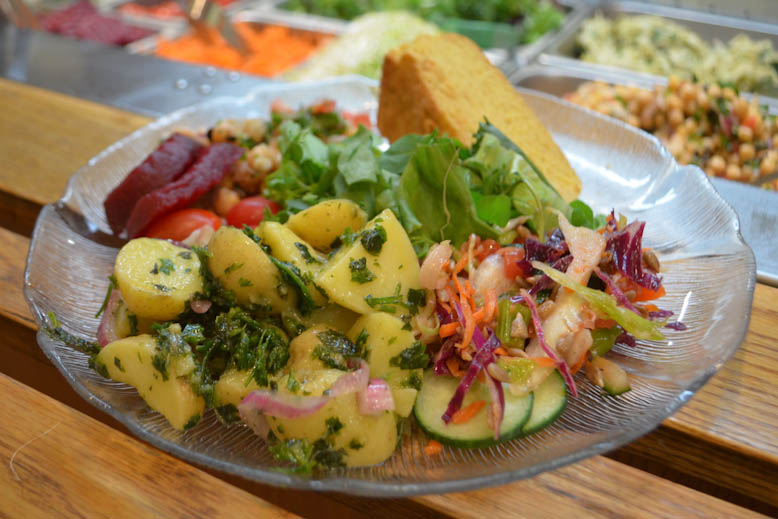 Victoria’s venerable vegan haunt, Green Cuisine, has been one of the city’s essential good-for-you places to eat for 24 years. That is no small feat, considering the restaurant business is as precarious and changeable as the weather. How have they managed to retain and attract their eclectic and devout clientele? To answer that question I recently stopped by the iconic “buffet-style” restaurant—two dining companions in tow—to sample their wholesome, vegan fare.

There is no denying it—stepping into Green Cuisine is a bit like backwards time travel—step beyond the threshold and you are immediately transported  back to the early 80’s by the restaurant’s laid-back ambience and “mother-earth” décor. Do not let the hippie vibe put you off though—the room is, in fact, very cozy and inductive of great conversation—two absolute “musts” for enjoyable dining.

I started my vegan feast with a steaming bowl of red lentil soup that had the surprising and delightful addition of plump, sweet dried apricots. The sweetness of the apricots married well with the soup’s exotic spice blend, creating a distinct flavour that left me wanting more. However, I reluctantly put my spoon aside and dug into a decidedly crispy, “croquette-like” falafel that boasted a delicious creamy, intriguingly spiced center enhanced by the cashew “aioli” I covered it with. The vegan aioli also elevated the spoonfuls of undeniably bland steamed brown rice I had added to my plate. Thankfully, I left a little of the rice to “mush” into a scrumptious mess of mild and sweet tofu smothered in onion and mushroom gravy. Admittedly, I am not a tofu lover, but this creation, which had a curiously pleasant acidity to it, was truly delectable. (I simply MUST find out how they make that gravy!)

At this point, I found myself craving greens and happily devoured a satisfying serving of lightly steamed organic broccoli and kale. Yet again, I made this virtuous fare slightly more hedonistic by topping it with a cashew-based sauce—this time a decadent and smooth cashew “sour-cream” that had the palate-pleasing texture of a rich pastry cream.

Surprisingly, after all this noshing, I still had room for salad.  The scoops of mixed baby-greens I’d selected were topped by an enticing mix of grated carrots; pickled beets; tomatoes; sprouts; pumpkin seeds; kalamata olives; tamarind chutney and a refreshing lemon-tahini dressing that provided just the right “zing” to this veggie melange.

Sitting back to take a “breather” before exploring Green Cuisine’s renowned vegan desserts, I compared notes with my dining companions. One, a dedicated carnivore, particularly enjoyed her carbs—most notably a light pesto quinoa replete with antioxidant rich artichokes and an oil and vinegar German potato salad made with local nugget potatoes. Our vegan pal had opted for a chipotle lime tempeh as her “entrée” and raved about the delicate lime and “smoked-salt” flavour it imparted.  There was also unanimous agreement that the “cosmic kraut”—a fermented blend of cabbage, golden beets, carrots, daikon and sea vegetables—was a hit.

As you can probably guess, all three of us anticipated dessert with pleasure. When it comes to producing sweet creations that are both mouth-watering AND salubrious—Green Cuisine does not disappoint. Rendered indecisive by the overwhelming selection of good-for-you treats, we all decided to try different items and share bites. I chose a raspberry/blueberry coconut cream cake and an almond butter rice crispy square. My companions selected a “mudpie bar” a chocolate mousse, and an apple-mango-strawberry crisp. There simply are no words to describe the deliciousness of the coconut cream at the center of my cream cake. To be honest the bottom layer of the cake was, for my tastes, much too bland and spongy.  However, the rich velvet like texture of the coconut cream made up for this minor miss. My rice crispy square was not too sweet and was lovely and crispy, but I felt it could have used a tad more almond butter to up its gooey factor.  The mudpie bar, a yummy concoction of chocolate, peanuts, pecans and crisp rice was enjoyed by all, as was the unbelievably dark and decadent chocolate mousse.

Nevertheless, the absolute winner of the dessert round was the fruit crisp. The topping was a wonder on its own—a perfectly browned crunchy mix of oats, coconut and sweetener that paired exquisitely with the fresh fruit it adorned.

It was clear I had my answer—we left the restaurant truly satisfied and no longer curious as to how Green Cuisine has endured in a city with so many fantastic eating-places.  If you are in the mood for some wholesome, lovingly prepared food—not to mention time travel—step into Green Cuisine yourself—I highly recommend the trip!

Greetings my fellow wholesome food lovers. Welcome to another edition of Good-For-You Grocery Finds! I hope you had a wonderful, chocolate-filled ...
Read More
Hello my friends. Here we are knee deep in February with the anticipation of an approaching Spring bringing its annual soothing consolation. I hope ...
Read More
Happy January my fellow nutritious nibblers! I am back, as promised, with another edition of Good For You Grocery Finds. This “post-holiday” ...
Read More
Health experts have been extolling the health benefits of grass fed beef for years—for good reason. Compared to beef from conventionally raised ...
Read More
When I was a child, protein powders were a rare commodity, consumed only by hardcore bodybuilders. Today, in our time-crunched, health-conscious ...
Read More
There’s no denying the appeal of potato chips, especially in summer, when they make the perfect no- fuss accompaniment to a grilled burger or ...
Read More

For the ninth year in a row Rancho Vignola is setting up its Vancouver Island Harvest Sale here at the Mary Winspear Center in Sidney. Many of ...
Read More
Season’s Greetings EAT readers! We at EAT are looking forward to all the wonderful seasonal baking on offer around the city. One of the great joys ...
Read More
Masterclass Candied Citrus Holiday ...
Read More
November | December issue on the stands. Read ...
Read More
DRINK editor Treve Ring asks local wine experts how they would approach pairing dishes and flavours. For this new year edition, we are pairing to ...
Read More