Left: Myself — Courtney Schwegel on left, and my friend right before we left. Right: Delicious pizzette.

Eating, Drinking, and Cooking My Way Around Europe – Part One of Five.

Bread, cheese, and more bread—behold the typical diet of young backpackers, who scrimp on food to save money for all those iconic and often overpriced cultural experiences. While climbing to the top of the Eiffel Tower or going on a personal, guided tour of the Vatican are highlights of many people’s European adventures, my adventures were a bit different. 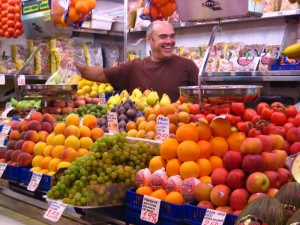 Fresh out of culinary and pastry school in Vancouver, where I had spent a year leaning about European cuisine, I was hungry to experience the real deal. I wanted to discover the art of French home-cooking in France’s countryside, explore the process of German beer-making in Bavaria, learn how to make Paella in the south of Spain, and experience cafe culture in Vienna. I yearned to browse open-air markets, interacting with the farmers and artisans and cook with the fruits of their labour.

With nothing more than 30 pounds strapped to our backs, a good friend and I, both of us avid foodies, ventured off to Europe with open minds and open mouths. Our three month, nine country trip was packed full of amazing food experiences (about fifteen pounds worth, to be honest). As our waistlines expanded, so did our cultural understanding. We found that the easiest and often the least expensive way to get a true taste of culture was to put it in my mouth. After all, a lot can be understood about a region and its people by examining the attitudes and traditions surrounding its cuisine and the enjoying the cuisine itself.

And so it began in Ireland, Scotland and England. While not necessarily famous for their phenomenal food, each offered up unexpected treats. In Ireland, it was the dairy products. In a land abundant in striking emerald pastures, grass-fed dairy is the norm, not a sought-after luxury. Everything from the cream to the yogurt had a bold, almost gamey, flavour, a golden hue and an exceptionally velvety mouth-feel. And the cheddar cheese— characterizing this cheese as sharp took on a literal meaning as it was peppered with the tiny, crunchy, intensely-flavoured crystals formed by calcium lactate during the aging process. After our first taste of it, our picnic lunches always included a big block of Old Irish Cheddar, which I quickly deemed to be the king of all cheddars. 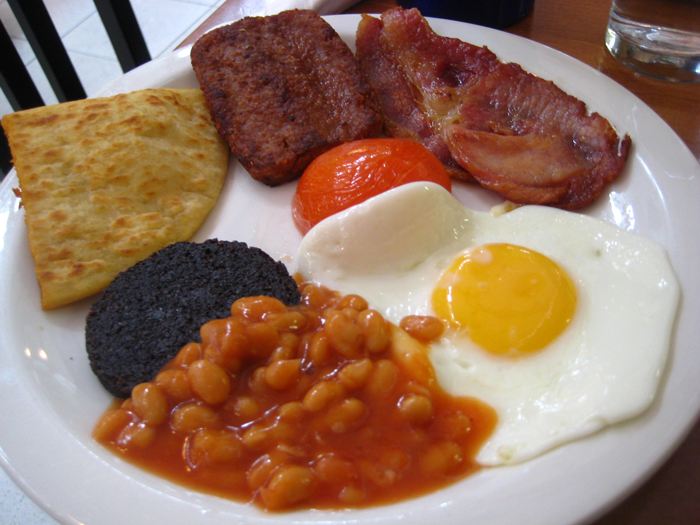 Our week-long love affair with Irish cows came to an end as we headed to Inverness, a little town in the Scottish Highlands, for a week of bagpipes, beer, and black pudding. We quickly discovered that a full Scottish breakfast is an effective cure after a full Scottish evening. A hefty plate of fried eggs, beans, sausage, black pudding, potato scones, and grilled tomato always hit the spot at Annya’s Cafe. After a nibble of the starchy potato scone and a bite of crispy, oily, unctuous blood sausage, I reminded myself to go to the Shine Cafe when I got back home to Victoria, the only restaurant that I know of here that serves up an authentic Scottish breakfast.

After boosting our iron levels with enough black pudding, we took an overnight bus to London. Our time in London was spent exploring the city on foot, gawking at Big Ben, taking in an Evensong service at Westminster Abbey, and visiting the tower of London. After all the walking, we craved rich, heavy, stick-to-your-ribs fare. Luckily, we were in the right country for that. We’d heard buzz about a little Pie shop in Covent Garden called The Battersea Pie Station that served up individual meat pies for £5 a pop. I opted for the traditional steak and kidney pie and was pleasantly surprised—it had a wonderfully flaky, buttery, crisp crust and big hunks of rich kidney coated in a deep, meaty gravy. This pie alone was enough to convince me that not all British food is bullocks.

Satiated with our sampling of Ireland, Scotland and England, we continued on to Spain and France, the two countries that held the most culinary promise for us. We were hungry for a little more culinary excitement in the form of paella and pissaladière. Little did we know that what was waiting for our taste buds would exceed our expectations.

The Number Creative has crafted this fantastic video of Victoria Beer Week for everyone to enjoy, touching on all the different events that happened. ...
Read More