Seafood feast at Bonobos, View of Granada from the Alhambra. Photos by Courtney Schwegel

The train to Spain was a little insane. It was hot, uncomfortable and nobody spoke a word of English. Tired and famished after a long journey that involved two overnights trains we were elated to escape our stuffy little train car and find some good Spanish grub in Barcelona.

A hostel worker had recommended we head to “Gasterea”, a little bar in the Gràcia district, an area popular amongst university students. We ordered frosty glasses of clara, a refreshing mixture of beer and lemonade that quickly became a favourite. Crisp, clean, light and lemony, clara paired beautifully with our feast of pintxos, small slices of grilled bread adorned with various tantalizing toppings all stacked on little skewers. 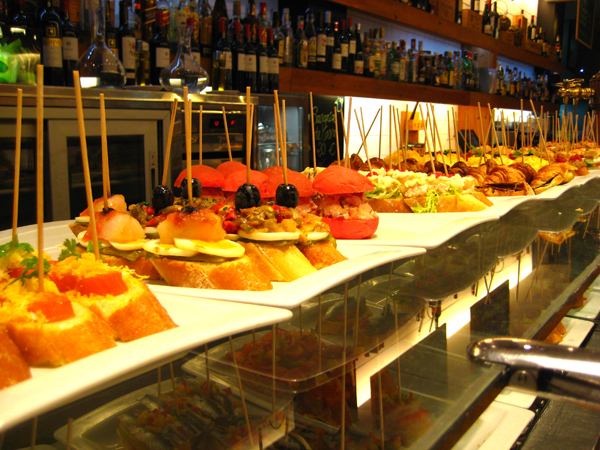 Platters of pintxos lined the bar and each time a new tray came out of the kitchen the bartender paraded it around, calling out its contents to hungry diners. If it looked and sounded tasty, one had to raise a hand and call “uno!” to snag one before they all disappeared. Each pintxo was tastier than the last but the clear winner was a fat, juicy prawn perched atop a flame-grilled artichoke drizzled with spicy aioli. At €1.50 a piece, we weren’t too worried about breaking our budget.

Each day at noon we made our way to La Boqueria, Barcelona’s famous food market off La Rambla, for a feast of the senses. Lunch was a scavenger hunt for Spain’s tastiest and most famous foods, and it never cost more than €10. We darted happily from stand to stand, buying some sharp Manchego cheese here and some buttery Iberico ham there, munching along the way.

After a week we bid Barcelona farewell and headed to the south-east coast of Spain to visit my Spanish friend from cooking school who possesses a powerful passion for his native cuisine.

He took us to Bonobo Playa, a restaurant on the beach just steps from the ocean for a paella and seafood lunch. We passed around bottles of fruity white wine and feasted on giant platters of mixed grilled seafood so fresh that it needed nothing but a squeeze of lemon. We learned to eat it like the Spanish – popping heads off shrimp to slurp out their concentrated, briny nectar and cracking open lobster tails with our hands. We even got the chance to sneak into the kitchen and watch a 70 year-old paella master working his magic while being seduced by the sultry scent of peppers and saffron.

What I appreciated most about this lunch was the lack of primping or pretention, the food was just naturally gorgeous. With the exception of grill marks, the fruits of the sea arrived on our plates looking pretty much as they do in the ocean. My Spanish friend said he had never seen a deveined shrimp without the shell until he went to cooking school in Canada. 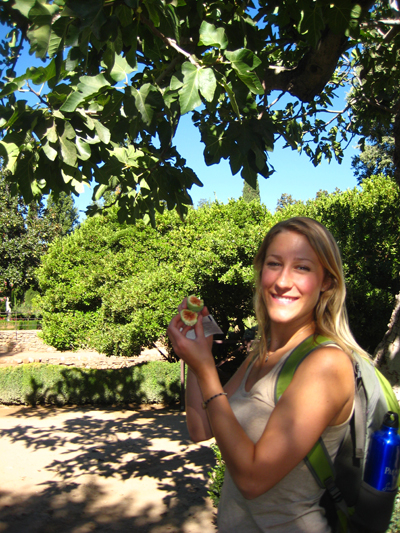 Myself picking figs from the trees at the Alhambra

Our last stop in Spain was Granada, a city of gypsy caves, flamenco, and of course, the Alhambra, the Moorish royal palace. We spent a peaceful day admiring the palace’s ornate, ethereal, Islamic architecture and wandering the grounds and the gardens. Our visit turned out to be an unexpected gastronomic adventure when we spotted fig, pomegranate and lime trees. The fruits were just out of our reach but with a little hoisting we managed to get out hands on the heaviest, sweetest figs I’ve ever tasted.

As our time in Spain came to a close, I couldn’t help but reflect on how much I’d learned from the Spanish about their food. What stood out to me more than any one particular meal or flavour was how passionate and proud the Spanish were about their cuisine and the pleasure they got from sharing it with us.

As we boarded our night train to Nice, I couldn’t wait to immerse myself in another culture’s food. That night I dreamed of croissants and macarons and when I awoke, we were in France.

July|August issue on the stands. Read ...
Read More
Although the gift of love may be the most important thing you can offer this Valentine’s Day, a little token to go with it never hurts. Remember ...
Read More