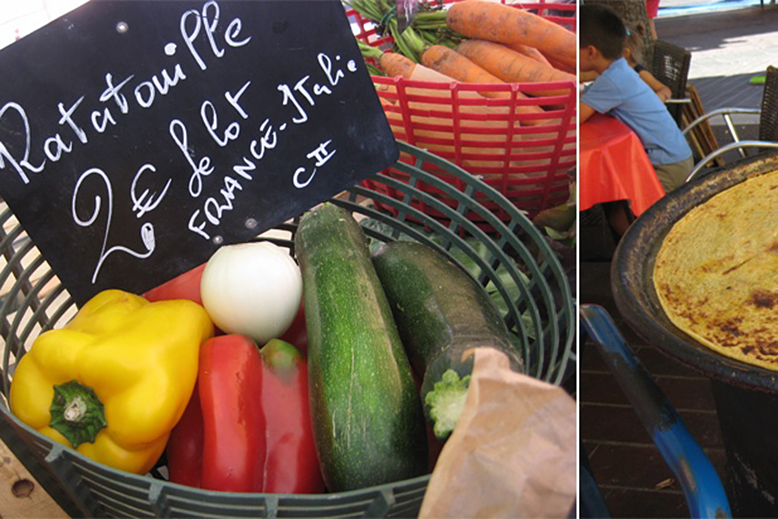 We arrived in Nice just as the sun was rising, bathing the ornate Mediterranean buildings in warm golden light. Immediately struck by the enchanting beauty of the city and the weather, we dropped our bags at our hostel and set out to Maché Cours Saleya, the morning market in the Vieux Nice to find some breakfast and admire the produce of Provence.

The market was a French foodie’s heaven with exquisite pastries, breads, cheeses, meats, spices, fruits and veggies. The best socca in town was rumoured to come from Chez Theresa who had a stand at Saleya, and I was dying to try this crepe-like Niçoise specialty made of olive oil and chickpea flour. I watched as it cooked over a fire on a large round pan and ordered a portion in broken French. It came piled high on a paper-lined tray, cut into messy slices. Crisp and crackly around the edges and moist, warm and spongy in the centre, a generous sprinkle of salt and pepper was all this addictive snack needed.

We hit up the market each day before heading to the rocky beach to bask in the sun and swim in the wavy azure water. We savoured sun-ripened tomatoes seasoned only with the salt the sea had left on our lips and watched the sun set with a bottle of Provencal rosé and a slice of pissaladière. Our picnic and wine ritual turned out to be a great money saver, never exceeding more than €12 or so.

Patisserie Lac, a trendy little chocolate and pastry shop just around the corner from Cours Saleya was our favourite spot for a little sweet treat. Their Palet D’Or chocolate had the smoothest, richest ganache imaginable and their macarons were by far the best in town. The salted caramel macaron, with its airy shell and gooey interior, was to die for.

Left: Castle ruins on the farm. Right: On our way to make apple juice

From Nice we traveled to the Loire Valley where we had arranged to work on a small hobby farm near the town of Baugé for two weeks in exchange for room and board. Thanks to a website called HelpX, we found a lovely little family to stay with.

They were just about as French as one can imagine. Their two-year-old son ate Roquefort by the fistful, and their teenage boy played the accordion every evening. There was always bread and butter on the table and a plate of beautiful cheeses accompanied every lunch and dinner.

Smack dab in the middle of their property were ruins from a 12th century castle and their big old stone home dated back to the 15th century.  Scattered around the buildings were gorgeous organic vegetable gardens, two greenhouses, goats, horses, chickens, pigeons, rabbits and llamas.

We had the privilege of connecting with food from its source – we learned how to prepare sauerkraut from beautiful garden cabbages and helped make apple juice to last the whole year. We dried plums and walnuts in the sun and helped made yogurt and fromage frais with the raw milk from the neighbours’ cows. In the evenings we prepared dinner for the family using the beautiful veggies we harvested during the day.

Our afternoons and weekends were spent riding bicycles to surrounding towns and exploring the cuisine outside of the home. We spent a few days in Angers, where we had a tasty meal at a Bistro Renault. The entrée was of marinated sardines on a bed of roasted red peppers dotted with pink peppercorns; the plat du jour, an impossibly tender filet de boeuf with shallot sauce and a cheese plate for dessert. Paired with gorgeous Angers wines, the meal was magnifique and only set us back €21.

Two magical weeks later we bid a teary goodbye to our little family in the Loire. As a professional cook and baker I wanted nothing more from our farm experience than to learn the art of French home cooking, but I ended up learning so much more. I learned about homegrown, honest, healthy, simple food. I learned about capturing the soul of one season and using it to get through another. Perhaps most importantly I learned about respecting the earth and appreciating each and every thing it gives up to nourish me.

After two weeks of hard work on the farm and a diet of mostly vegetables, we had worked up an appetite for hearty, meaty fare. Lucky for us, we were heading to Germany – the land of pork.

The article on L’Apéro in the May|June issue should have stated Chef Andrea Maiolo staged at The Courtney Room and Zambri’s and that he held the ...
Read More
May|June issue on the stands. Read ...
Read More
SOOKE   A collaborative, eight course meal from Chef Ito and Chef Jackson at the Sooke Harbour House, detailing and celebrating various ...
Read More