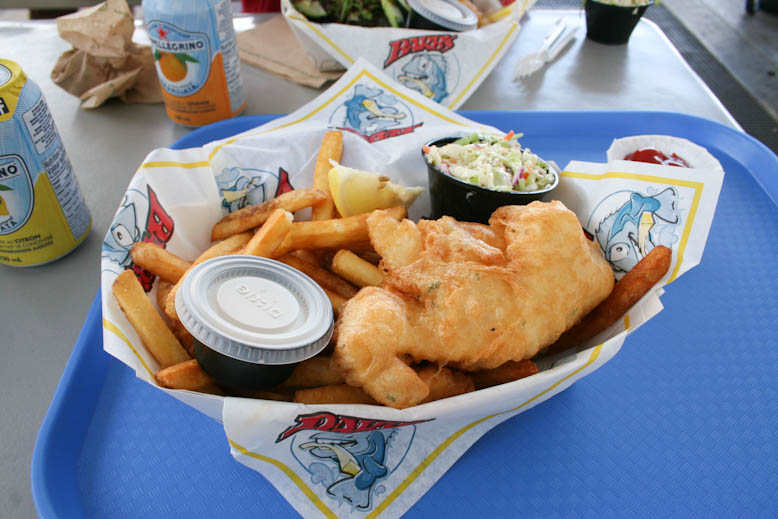 In a quest to discover the five best fish and chip places in Victoria, I spent a week eating nothing but this traditional seaside fare. In good faith, I spent a week eating only fish and chips.  This is not easy on the human constitution, dear readers.  Before I was even able to make it to every possible location in town, I found myself overwhelmed by the desire to consume celery and water for a week, and to sleep on a large sheet of paper towel like a slice of fried bacon, until all the grease had dripped out of my system.

“I sat and ate my fish and chips alone, listening to the deep fryer crackling in the kitchen, and the chopsticks clinking at the back.”

Nevertheless, I do love fish and chips.  Even though Victoria presents itself as a British-style city that has amoebically budded off from the mother country, and even though we are living right beside the ocean, the notion of fish and chips does seem a bit odd here.  Fish and chips feels like an Atlantic proposition, rather than a Pacific one.  Nevertheless, halibut and cod can come from Pacific waters (haddock not so much, unless it is an extremely lost haddock).  There was a time, too, when fish and chips was just about all people could get when eating out in Victoria, besides Chinese food.

In order to cut down on the number of places I had to visit, I decided to only go to restaurants that specifically billed themselves as “fish and chips”.  For example, Paul’s Motor Inn makes fine fish and chips, but they are not billing themselves as a fish and chips place.  In this way, I eliminated most bars, pubs, and restaurants that weren’t specializing.  Thus, I am picking five places that I enjoyed.  I visited a few that were less good, and I probably omitted a bunch, too.  Also, there are some (Old British, for example) that still have a full website, even though they no longer exist.  Very odd.  If you want to add to this list, feel free to let me know, or comment on EAT’s Facebook page or Twitter. 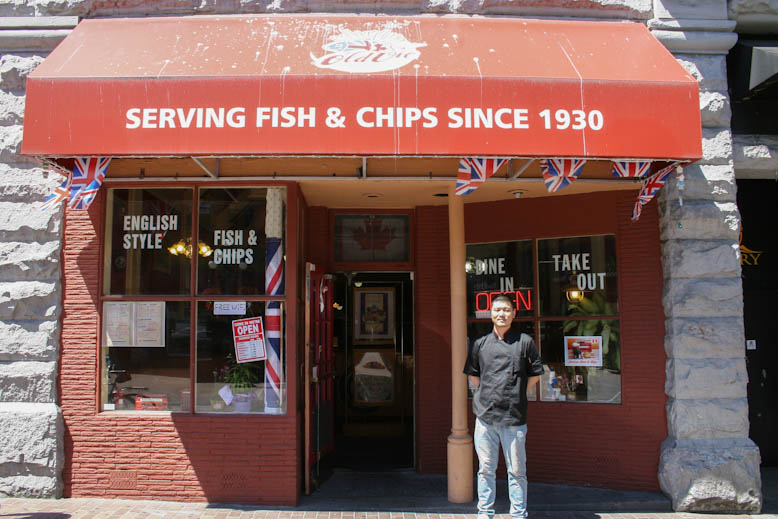 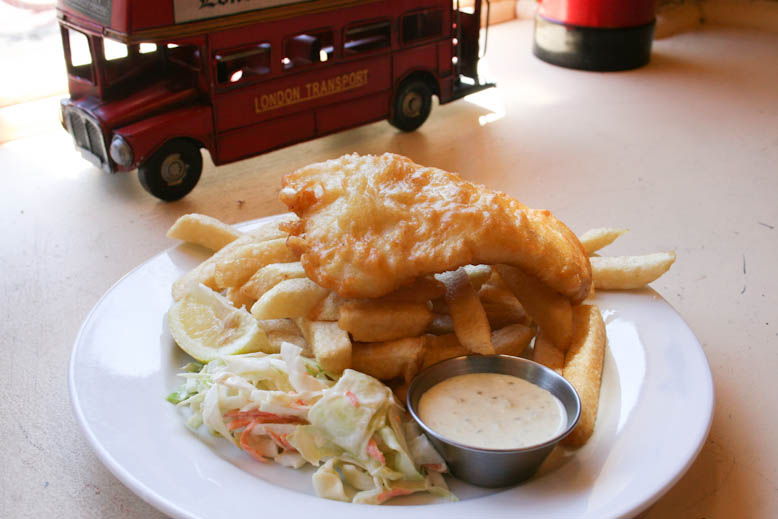 In business on Broad St. for 82 years, Old Vic is, in my opinion, the best fish and chips place in the city.  This place was a staple for the older generation, and a number of nostalgic grey hairs still come in here and relive their childhood memories.  Old Vic is in a barn-like room, decked out with the regalia of the Empire.  It has the feeling of an English social club.

The atmosphere alone is not the attraction, though.  The present owner, Yang Cao, learned to make British-style fish and chips while he was a student living in Northern England, along the Scottish border.  At that time, he developed a passion for fish and chips that translates into the way he cooks.  The batter is rich and crunchy, and the halibut nestled inside flakes nicely under the fork.  The chips, too, are exactly as English chips should be; they are plump and crisp and just the right texture.  It seems like a simple thing, but there is actually quite a variation in the way chips/fries are cooked around the world.  These ones nail the English accent.

Because the Cao family has a four-year-old child, they don’t like to keep the place open too late.  This is a pity, because I imagine the people pouring out of the clubs along that strip, late at night, would go crazy for fish and chips if they could have it.  Still, the place is well worth visiting during the day.   Fish, chips, and beer is a great traditional lunch. 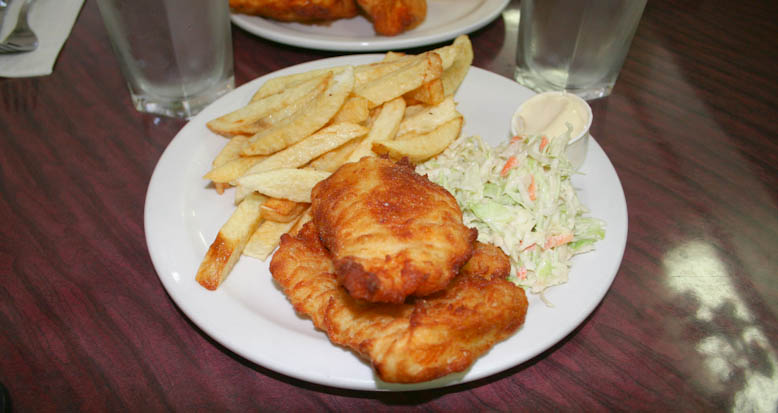 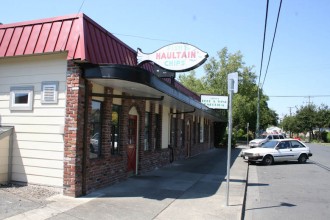 Haultain has been around for 90 years.  It makes an interesting contrast to Old Vic, because the approach to the batter is quite different.  As opposed to what one might consider the usual batter, which creates a pleasant pocket between the inside of the crust and the fish, Haultain’s batter clings directly to the meat.  It is much closer to a fried-chicken-type batter than a regular fish one.  That said, it is tasty, and the chips are very good.  I would recommend it, if you are a fish and chips fan, because it is an interesting variation on the theme.  The staff and atmosphere are great, too. 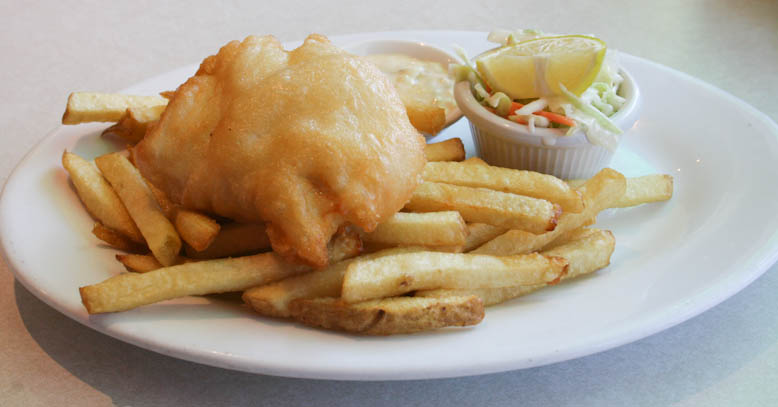 While I sat and ate, I got to experience that rare thing that one only sees in Chinese restaurants: during a lull in the action, the entire family running the place sat down at the back of the restaurant and had a quick meal together.  As usual, they were having something that wasn’t on the menu.  I sat and ate my fish and chips alone, listening to the deep fryer crackling in the kitchen, and the chopsticks clinking at the back. 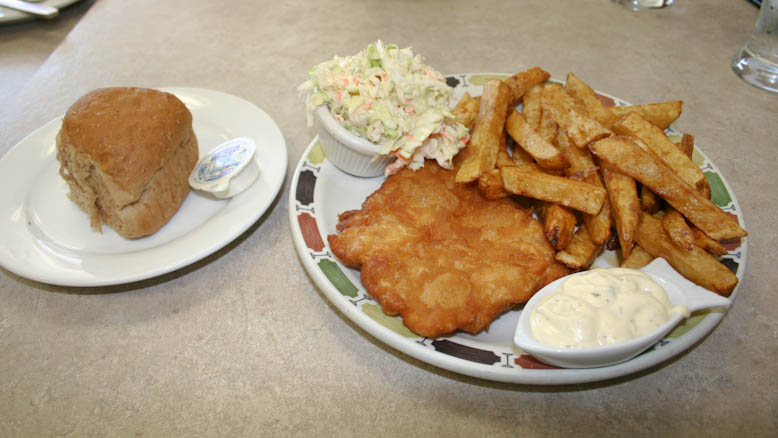 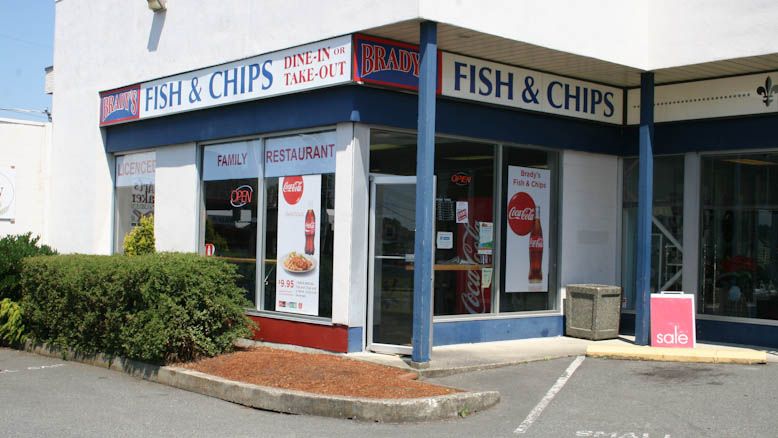 Located next to a great apartment that I didn’t get to move into, Brady’s is a fish and chip place up on Burnside road.  The batter is quite similar to Haultain’s, but a bit puffier.  The chips are good, too.  The place is large and has an old school, fast food vibe that I really like.  Plus, when I requested a lot of water, they brought me a whole pitcher plus a giant glass.  I hate having to work with a tiny glass of water that must be parcelled out in small sips throughout the meal.  I’m particular that way. 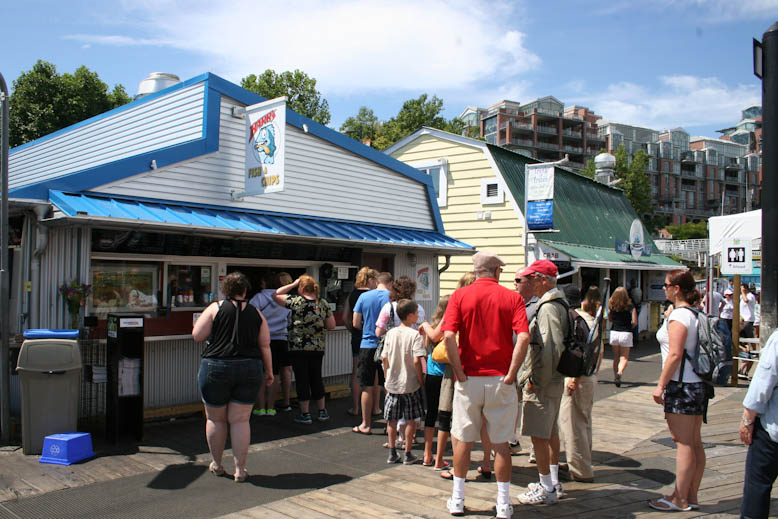 This is possibly the place that people don’t go to because it’s where all the tourists line up.  It is the kind of place you take your uncle and aunt to when they are in town from Calgary, just because they heard it was famous.  If you can stand the line-ups, though, and the tourists, and the gaudy houseboats, Barb’s is good, traditional fish and chips.  It is filling and delicious and it does the job.  Plus, you can feed the seals whatever chips you can’t finish…just don’t tell anyone I told you to do that.

This loaf has been selling out at Quadra Village’s new Gluten-Free Café, Santé. This recipe can easily be made vegan as well, substituting ...
Read More