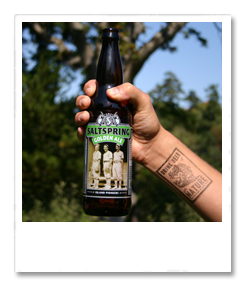 Great Canadian Beer Festival starts today! Beer lovers from around the globe descend on little old Victoria every year for this mega-popular al fresco 2 day affair. One brewery that isn’t making that far a trek to the festivities is Salt Spring Island Ales – one little BC Ferry ride away. 100% locally owned and operated, this craft brewery is terroir focused in a way not typically seen in beer. The water for all their brews comes from the site’s natural spring and the wooden barn brewery itself is built from trees fallen on-site. Committed to supporting local farming and suppliers, they partner with local Salt Spring Island hop growers, featured in this Golden Ale. In addition, they ‘close the circle’ by donating spent grain to Salt Spring cattle farmers, mushroom growers and bakeries.

And earlier this week, Gulf Island Brewing began harvesting its first crop of estate-grown hops. The organically grown hops, which began in 2009, are part of a collaborative farming partnership between Salt Spring Island Ales and neighboring organically certified Grandview Farms. “The brewery participates in some of the farming labour and contributes to infrastructure costs. In exchange, we get reliable supply of locally-grown hops at a reasonable price,” says Becky Julseth, co-owner of Gulf Island Brewing. With the brewery only two kilometers up the hill from the harvest site, they have the opportunity to harvest the hops while they’re major fresh. Their three hop varieties – Nugget, Cascade and Mt. Hood – will go from vine to kettle in about one hour. That’s fresh. Pickers will glean vines for precious cones and bring them up the road to brewmaster Murray Hunter, who will be ready and waiting with his boil in full swing. According to Hunter, “They’ll still be alive and kicking when we throw them in. I’m hoping you’ll be able to smell and taste that freshness in the final product.”

While we’re waiting on that local revelation, let’s whet our thirst with their popular Golden Ale. Mild, light bodied and easy to drink, with refreshing citrus, delicate floral and toasted cereal aromas. The palate is crisp and dry with grass, swish of sweet malt and an orange bitterness on the finish that is appealing. This ale, like all of their brews, is hand crafted and hand bottled in small batches, unpasteurized and unfiltered. Their slogan is “Drink Beer With Nature”, but if you’re still a little hungry, enjoy this with a lunch of grilled chicken panini.

If you’re one of the lucky ticket holders, you can visit Salt Spring Island Ales at the GCBF today and tomorrow (booth 35). They’ll be offering samples of this, along with their Porter and Heatherdale Ale.

September|October issue on the stands. Read ...
Read More
August 22, 2022 — Staff, volunteers, and board members from Victoria’s Belfry Theatre have raided some of the best local wine cellars to find ...
Read More
Victoria, BC – The OCTA Collective Society is pleased to announce the winners of the 4th annual “Colour Your Palate” fundraising event for ...
Read More