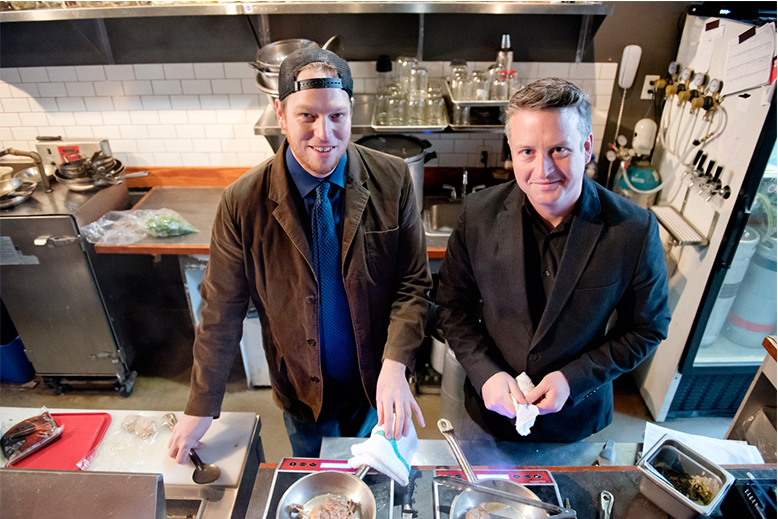 Hanks Untraditional BBQ has taken a couple weeks off to become Hanks – A Restaurant. In anticipation of the new era of Hanks, Eat Magazine’s article  with the chefs from the Jan/Feb 2016 issue might provide some clues for the new direction of the restaurant.

The day starts early for Hank’s chefs Andrew Mavor and Clark Deutscher. At 8:30, the two meet in Deutscher’s apartment, one floor above Mavor’s. A variety of often random cookbooks and culinary history texts are pulled out and coffee is brewed. The scene is set for what will eventually become the next dish at Hank’s Untraditional BBQ, one of the many to be added to the long list scrawled in chicken scratch on spare bits of butcher’s paper that now serve as the in-house menu. Notes fly, ideas ricochet off the walls, the insane and impossible are heatedly justified, shot down, reformulated, then often tossed in the garbage. Eventually, after hours of exhaustive research, potentially a fistfight, and a softening of egos, the two madmen settle on an idea they can work with. One they can call their own. And one that will become another remarkable example of the extraordinary meals coming out of the Hank’s tiny, open kitchen. Then the pots and pans come out and the process is repeated, only this time the stakes are high as fire and hot oil are added to the chaotic mix.

Why the intense process day in and day out? Well, it could have something to do with the fact that these guys have almost no culinary background. Deutscher was in finance; Mavor was a globe-trotting electronic music producer and DJ; and Frank Pilon, co-owner of both Hank’s in Ucluelet and Victoria, was best known for his restaurant Driftwood, which literally blew up in an electrical fire in 2012. There was dabbling in the past—line cooking, front-of-house jobs, ad hoc restaurants run out of cafés and ardent home cooking—but nothing that really pointed towards a bright future on the restaurant scene.

Experimentation, failure, disaster and, finally, success from the ashes seem to be reoccurring themes for the crew at Hank’s. When Hank’s in Ucluelet took off, Deutscher decided it was time for a move to Victoria. They opted for one of the many dead zones on Douglas Street, a location that has served as a site for fast failure for many a small business. This was in keeping with the tradition of throwing pretty much all caution to the wind, and it has worked with remarkable success. With the restaurant’s modest stretch of bar for single seating and a couple of small window-facing countertops, finding a spare seat becomes a game of strategy. When asked if they would ever move into a larger location, Deutscher and Mavor reply with wry smirks: “No.”

If you are a regular at Hank’s, you are not going for the barbecue. At the mere mention of barbecue, the chefs’ upper lips curl in what can only be described as a mix of distain and regret. It’s not that they don’t like barbecue, they like it just fine and have even managed to scrape together a few awards at local competitions. Yes, Hank’s Untraditional BBQ still serves barbecue—for now. But the chefs simply don’t want to be confined by that heavy, borderline fundamentalist tradition that comes along with true barbecue. As such, they have broken free of the hold of barbecue and are now determined to run amok, answering to nothing but their own creative impulses and to no one but the dedicated patrons who return again and again for a chance to participate in their adventures. 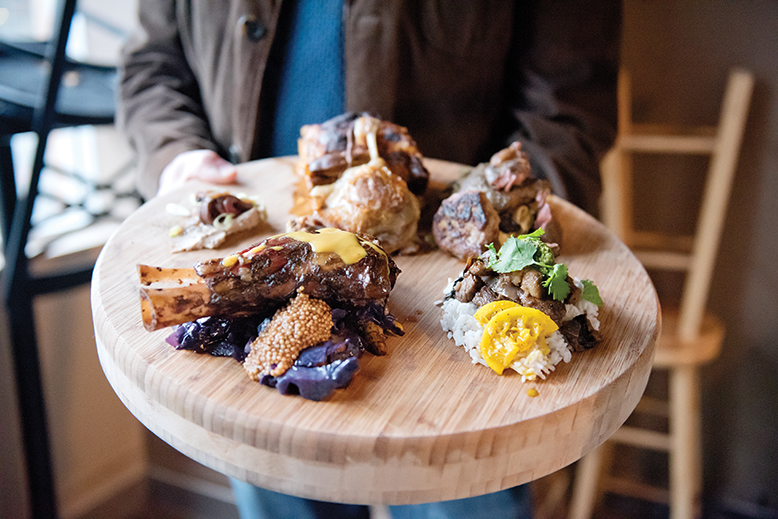 So, what is Hank’s if it’s not barbecue? It’s a food lab disguised as a hole-in-the-wall restaurant. The test kitchen is in the apartments of Deutscher and Mavor, the experiments are given life in the cramped bypass behind Hank’s bar, and all of us are test subjects. Deutscher and Mavor don’t just focus on the cooking. They are heavily involved with the animals they procure. For example, when a friend, Étienne Côté, bought a small Courtney-based farm (Hillcrest), they put up the money for the animals they wanted raised. They visited their animals, named their animals, played with their animals, and then led their animals to slaughter. They break down the pigs, lambs, and turkeys in house and set about designing uses for every part imaginable. The menu is a clear demonstration of this, with new specials and last-minute creations added daily. On any given day, you might find turkey ravioli with porcini cream and toasted sunflower seeds; or ginger-ale-braised lamb neck with fried rice and beans topped with an egg; it could be Waygu beef short rib pastrami with creamed cabbage and dried Okanagan cherries; or, if you are really lucky, a whole roasted pig’s head for two. But it’s not all about the meat. It’s increasingly an exploration of cultural heritages that influence the preparation of dishes. They have recently experimented with Philippine-style turkey adobos, Mexican tamales and fat-fried tar salsa, Italian-style milk and honey ribs, Newfoundland touton (pancakes fried in pork fat) and, currently fermenting in a cool, dark closet, chickpea miso.

When you go to Hank’s, and you should immediately, take some time to appreciate what is happening in front of you. We’ve all had a fantastic dish or two in Victoria, but these those dishes are created almost exclusively behind closed doors. The plating, cooking, never-ending prep, dishwashing and bartending at Hank’s all play out in a tiny stretch of space as patrons watch from the bar. You might have the chance to see an entire turkey cut and carved fresh from the smoker. A pungent scent hits your nose—it’s a slow brewing sauce in progress for a new dish. Want to know what that spice is? Where that cut of meat came from? What that basket of apples is for? Just ask. When you go, order the weirdest thing on the menu. Something you’ve never tried. And tell them that. Watch as they negotiate the tight space and each other, never missing a beat as they move specifically and tenderly to create your dish. Watch them jump to with enthusiasm and borderline maniacal glee as they take on your challenge. And after a few minutes, after you’ve had a chance to let what you are eating really sink in, wait for the check in. Not that tired line fed to you by bored servers: ‘How are those first few bites tasting?’ No. They will ask, “So. How is it?” because they truly want to know what you think.

Hank’s may be departing from barbecue, but the slightly unhinged drive towards uncharted territory has garnered an enthusiastic cult following. Experimentation, failure and hard-won successes in the kitchen are the fuel behind this new direction. Back at the apartments of Deutscher and Mavor, you are likely to find fois gras duck breast carpaccio hanging in a linen closet, fermenting habaneros and green tomatoes stashed in a corner, and on the stove some homemade tortillas frying in beef tallow. Recently they have taken on knife making with “go-to opinion guy” and one of Hank’s first customers, jewellery maker Devon Revell.

So often the food we eat is overly curated, backed by years of experience in hardened tradition and technique. Hank’s is a restaurant built on inexperience, haphazard ideas and a love of discovery. The boys at Hank’s are following a very flimsy scientific process of research, experimentation, creation and testing that has produced dizzyingly good food with an equally good story behind it.

The article on L’Apéro in the May|June issue should have stated Chef Andrea Maiolo staged at The Courtney Room and Zambri’s and that he held the ...
Read More
May|June issue on the stands. Read ...
Read More
Earlier this week Vancouver was whisked away to Tuscany. Or, at least, Vancouver’s palates were. The Brunello di Montalcino World Experience took ...
Read More