“Move over, cupcake. It was good to know you, macaron. Say hello to pie.

Pie is having its moment. And it’s just the thing for a beleaguered middle class. Let the 1% daintily nibble gold-foiled, cognac-filled, chocolate truffles. The other 99% go for the wholesome taste of the more humble, affordable, and down-to-earth pie. And which pie reigns supreme? Apple, of course. 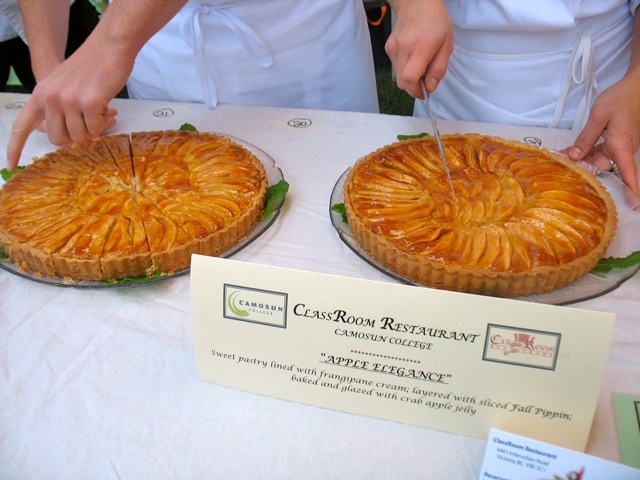 The 2nd Annual Pie Tasting, held Saturday, October 15th at Moss St Market, saw dozens of chefs brave a picture-perfect, west coast, fall day to present their version of the apple pie. Every type of pie—from the honest classic to the more fanciful and creative— filled three long tables at the east end of the market. Among the more than two-dozen bakers were some from Vista 18, Jenny’s Olde Country Fair, Delta Grand Pacific, Kitchens of Distinction, Spinnakers, Sweet Flour, and students from Camosun College’s Culinary Arts Program (under the direction of chef Gilbert Noussitou).

For $5, market-goers bought a ticket that allowed them to choose sample slices from three different pies. Orchardist Harry Burton of Apple Luscious Organic Orchards provided the apples—all of which were heritage varieties—for the chefs to bake with. This made the tasting all the more intriguing, as you could compare pies that were made from  different apple varieties. Burton was on hand to explain the different types and their characteristics. As well, he had a table with a selection of heritage apples for sale (the popular English pie variety, Bramley’s Seedling, was disappearing fast). One crowd favourite was the Salted Caramel Apple Pie baked by Pie Common, which used Island -grown wheat flour, Vancouver Island salt, and spigold apples. Some good. 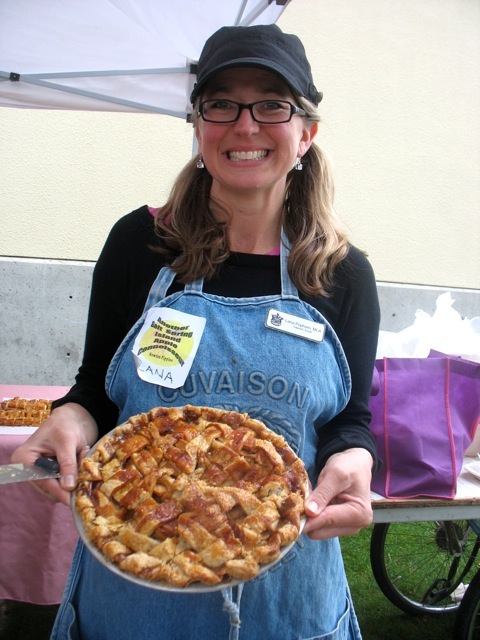 That pie stayed in my taste memory all week, so when market day rolled around again I was back at the Apple Luscious apple stand buying Cox’s Orange Pippins (very aromatic) and Belle de Boskoop (good acid) for my own version of the salt caramel apple pie. Here’s a link to the recipe I used as a starting point. Recipe 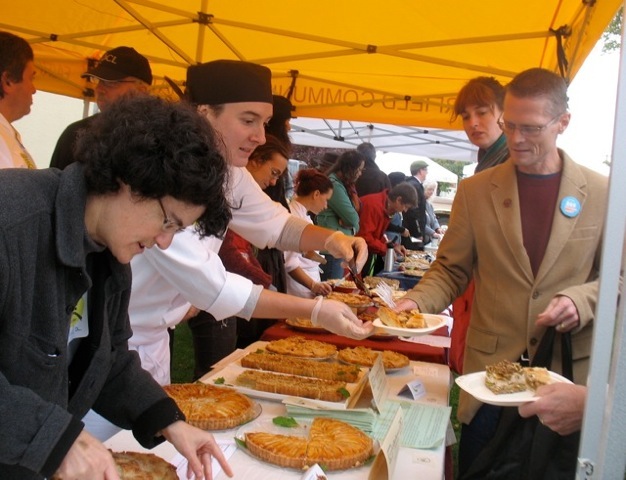 Now that apple season is nearing its end I will be looking forward to next year’s harvest and another pie-off at Moss Street Market.

The event was a fundraiser to benefit the Mustard Seed Food Bank, Moss St. Market, and the Island Chefs’ Collaborative.

Heritage apples for sale from Apple Luscious Organic Orchard at Moss St Market in Victoria, BC

July|August issue on the stands. Read ...
Read More
OK, sure, soups and stews are great, but at this point can we just be honest and say they’re getting a bit old? When the first whispers of winter ...
Read More