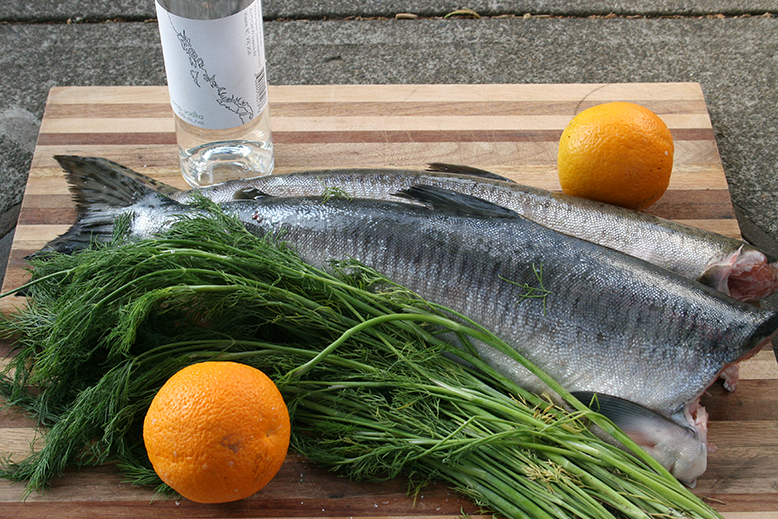 Smoked salmon has always been a big part of my culinary life. It’s not that I grew up anywhere near the ocean, but the stuff was always plentiful in the fridges of my childhood. Probably because of the strongly Ashkenazi taste buds of my family. There was a bit of controversy (starting and ending with me) when my Father’s girlfriend started replacing the gefilte fish at Passover with her own homemade gravlax. The gravlax she makes is actually delicious, but it was hard for me to let go of the tradition.

Regardless, I decided that I ought to make my own gravlax here in Victoria because we do live beside the ocean, and salmon is cheap and plentiful during the summer. Gravlax is like smoked salmon, but without the smoking aspect. The fish is cured in salt, sugar, and dill, pressed under a weight. Originally the people in Scandinavia made this dish by burying fish just above the tide level in beach sand and letting it ferment. The name “gravlax” actually means “grave salmon” in Swedish. You don’t have to do this step, however, because the beaches in Victoria are probably not that sanitary. Just make the fish in your fridge, as I did. 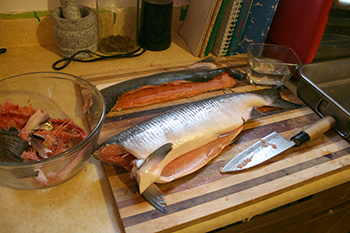 Step one: I got two salmon for $10 at Fairway. They had their heads cut off, and they were already gutted, but the bones were still in. Deboning the fish and making fillets was quite a thing. I sort of regret not getting already cut fillets because it was time consuming; also, I got in trouble for using Katie’s eyebrow tweezers to remove the little stomach bones. Those have to come out for sure. There are good deboning videos on YouTube, so I will spare you those instructions here.

Step two: I now had four filets, skin still on, that came from the two fish. I decided to do two traditionally, with kosher rock salt, cane sugar, lemon zest, and a whole lot of fresh dill. The second two (and credit goes to Katie here) got a “screwdriver” gravlax mixture made with salt, sugar, dill, orange zest, orange juice, and vodka. 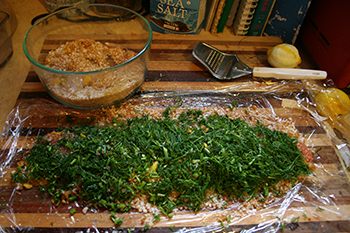 Gravlax filets covered with the mixture

Step three: How much of everything to use? The main ingredients are the salt and sugar. You need enough to coat the fish in a good rub. So that it works in everywhere. In retrospect, I think a higher balance of sugar and a lower balance of salt is better, as my fish turned out a bit salty. I packed the fillets over top of each other with the open flesh facing in and the skin facing out, the middles packed with dill.

For the screwdriver mixture, I used about a quarter cup of vodka between the two fillets, and as much juice as I squeezed out of one orange. I put the booze and juice on before the salt—although this was mostly experimental. Note: in this case, I used Left Coast Hemp Vodka from Victoria Spirits—it’s great in White Russians, too. 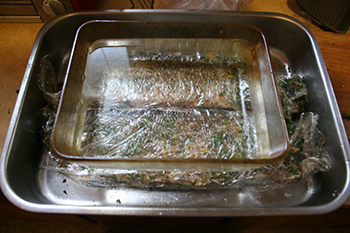 Step four: I covered the fish in cling wrap, with its ends open so juice could get out, put them in a big pan, and then put a weight on top of them (in my case a baking dish filled with water) to help gravity squeeze the fish juice out and tucked it into the fridge. Over the next 40 hours, the salt and sugar cured the fish. After it had cured long enough, I took it out of the fridge, quickly washed off all the coating with water until the fish was pink again, then sliced it up. Here are a few recipes I tried:

#1: Screwdriver gravlax on rye toast, with goat’s cheese, cucumbers, and a dash of balsamic. I served this with my own homemade dill pickles on the side. It made for a nice light, summertime lunch. 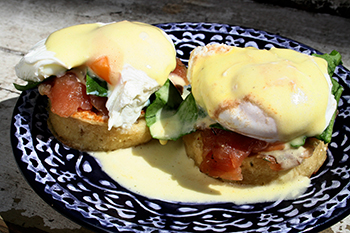 #2: I wasn’t being ambitious enough last time. My second recipe was Eggs Florentine, with gravlax on homemade crumpets. I churned my own butter, used it to make hollandaise sauce, and then used the leftover buttermilk to make the crumpets. I served poached eggs on top of spinach from my garden, topped this with gravlax, all layered on a hot crumpet, then drizzled the hollandaise sauce over the top. This was an extravagant breakfast if I do say so myself.

#3: I also boiled the leftover fish bones and made a tomato-based fennel and salmon soup … but that is a story for another time.

The companion recipes to Cinda Chavich's article, My Balkan Food Memories,  in the Sept|Oct 2022 issue of ...
Read More
Spinach and Herb Pesto Makes about 1 cup. 1½ cups finely chopped spinach 1½ cups chopped parsley 2 Tbsp lemon juice, about half a lemon 1 jalapeño ...
Read More
Perogies with Potato and Wild Mushroom, or Two Cheese Filling   This is my recipe for perogies with a fluffy, mashed-potato-infused dough—one ...
Read More
A lyonnaise cheese dip, literally translating to “silk worker’s brain” named after the  “canuts” the silk workers of 19th century Lyon. ...
Read More
When it comes to eating seafood, crab is one of the finest in selection. The flesh is buttery, sweet and meaty. From the Pacific Northwest to the ...
Read More
Advanced Home Cooking with chef David Mincey – parts 4 & 5 of a 9 part cooking series.     One of my favorite parts of The Advanced ...
Read More

November | December issue on the stands. Read ...
Read More
For the ninth year in a row Rancho Vignola is setting up its Vancouver Island Harvest Sale here at the Mary Winspear Center in Sidney. Many of ...
Read More
Season’s Greetings EAT readers! We at EAT are looking forward to all the wonderful seasonal baking on offer around the city. One of the great joys ...
Read More
Masterclass Candied Citrus Holiday ...
Read More
Pizzeria Prima Strada is known for their inventive long table dinners and their support of good causes. So we wanted to bring Mangiamo to your ...
Read More