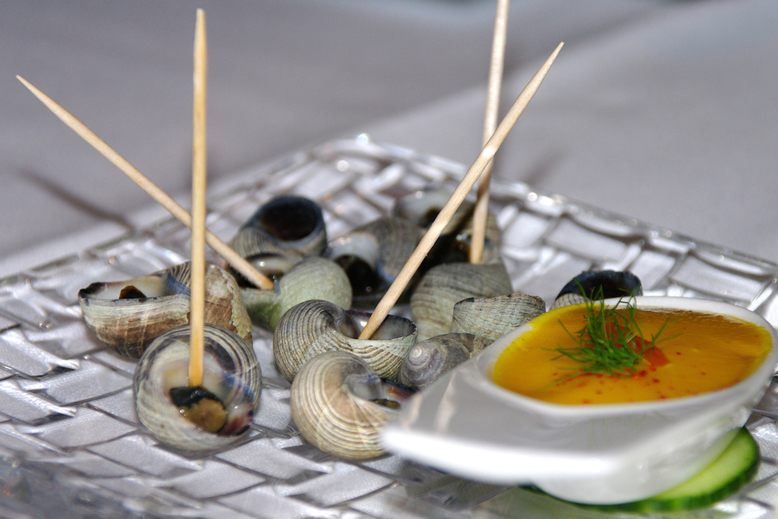 Progress is a tricky thing. People are scared of change. We are, after all, if nothing else, creatures of habit. But, truly, in recent years there’s been a sea change in the way we’ve come to regard our seafood: from where it comes, it’s true, precious value; and it’s unpredictable fragility.

Much of that awareness has been nurtured by our culinary leaders. In fact, if it weren’t for the vibrant and forward core community of forward thinking chefs, there likely wouldn’t be even the small amount of political will that we do have, to act on our oceans behalf. 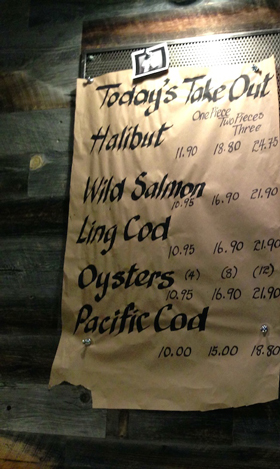 These thoughts occur as I notice that Blue Water chef Frank Pabst’s remarkable “Unsung Heroes” menu turns ten this year. I’d suggest it’s something of a milestone, in that when Pabst rolled out edition number one there weren’t too many folks around who were highly motivated to eat barnacles, urchin or even sardines for that matter.

I vividly recall that first Unsung Heroes dinner, when the chef delivered plate after plate of truly esoteric tastes, but designed in extraordinary artful manner, which made them quite irresistible. If people weren’t sure about what they were eating they didn’t show it; after all we were there as professional diners. But what’s interesting is how much, in the years since, the menu has been more broadly embraced with such fervour. Compared to ten years ago, this year Blue Water will entertain four times the number of guests for Unsung Heroes. Surely that in itself is testament to just how much awareness of sustainability and seasonality has taken hold.

At the time, Pabst took a different tack from high profile, then C-Restaurant chef Robert Clark, who back in 2005 was very much responsible for laying the groundwork for the immensely successful Ocean Wise program that now spans the continent.

Clark first became concerned about the future of popular seafood species when issues surfaced regarding the serving of Chilean Seabass at C Restaurant. Like Pabst, Clark was visionary in seeking out solutions and new directions. Even though C had always been cutting edge in its approach, tired of run-of-the-mill ingredients from large wholesalers, the chef opted instead to work directly with fishers and growers. It was an uncharted journey often through fascinating territory. 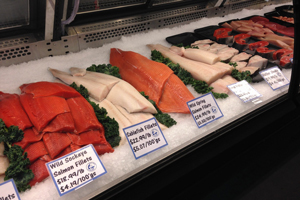 Clark first became concerned about the future of popular seafood species when issues surfaced regarding the serving of Chilean Seabass at C Restaurant. Like Pabst, Clark was visionary in seeking out solutions and new directions. Even though C had always been cutting edge in its approach, tired of run-of-the-mill ingredients from large wholesalers, the chef opted instead to work directly with fishers and growers. It was an uncharted journey often through fascinating territory.

Cutting through the traditional stranglehold of the major fishing companies, Clark connected with people like Fred and Linda Hawkshaw, who for years had been working to establish their tangle-net Sockeye fishery on the Skeena River. He and Fred worked out a plan whereby the Hawkshaws kept the fish seawater penned until needed, then killed and bled them before shipping them on an overnight truck to Vancouver. The first shipment proved quite challenging: Clark had never had fish arrive in his kitchen in a state of rigor mortis. They were indeed fresh.

Clark also promoted the revival of the West Coast Pinto Abalone, driven by the efforts of the Bamfield Community Huu ay aht Abalone Project. At the time it was funded in part by Environment Canada and Bamfield Marine Sciences Centre—an outreach pilot project aimed at reintroducing the Pinto abalone, which was all but eradicated due to overfishing (in part due to the arrival of SCUBA equipment) in the 80s and 90s.

On rare occasions Clark managed to get the gastropod to C’s tables—no small feat in itself given the bureaucracy involved: each one of those pearly shells had to be returned to Department of Fisheries for counting, as the war on abalone poaching continues unabated.

It takes a certain determination by chefs like Pabst and Clark—and in Vancouver they’re part of a growing number—to chart a course for responsible sourcing. It also takes a different style of owner: someone who’s prepared to place principals before profit. Or, perhaps more important, someone who can see the value and potential in catering to and nurturing a clientele who’ll come back for better tastes, sustainably sourced. 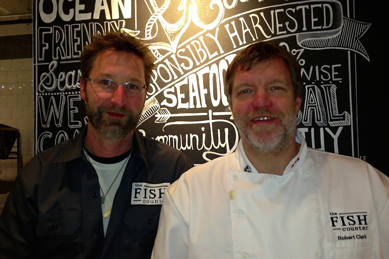 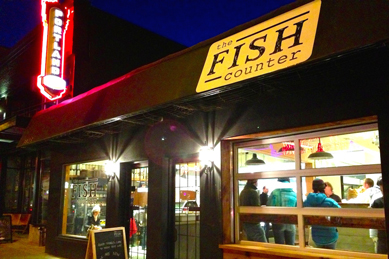 Like Pabst, Clark’s initial vision has evolved considerably, so much so that he and business partner Mike McDermid recently opened their all-sustainable Fish Counter, (3825 Main St., Vancouver, 604-876-FISH [3474]). McDermid, a long time fisheries expert and marine biologist, is the former program manager at the Vancouver Aquarium, with whom Clark collaborated to get Ocean Wise up and running.

It took two years for Fish Counter to come to fruition. But it exemplifies the partners’ profound commitment to their mantra. It’s part fishmonger, part bare bones fish ‘n chippery, in a custom designed store that blends ready to eat items with retail seafood sales. And everything cooked or sold is sustainable.

After a month of non-stop action, McDermid was still in slight disbelief.
“The community response has been incredible; we’re busier than we ever expected to be.”

When I asked him what he thought was behind the enthusiastic response, he replied: “People are really happy to finally have a fish store in their area,” says McDermid.
But the fact that everything is sustainable is also key.

“It had better be,” he chuckles.

The Fish Counter’s arrival is part of a small wave of sustainability now lapping at the shameful mediocrity of the seafood retail sector which in the mainstream is still stuck somewhere in the 80s. 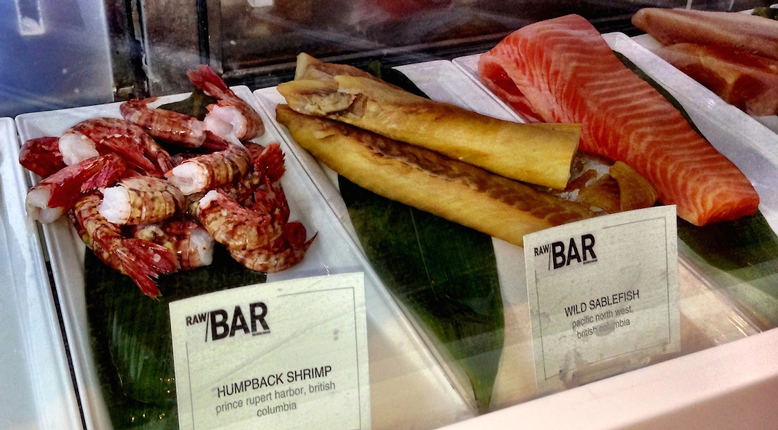 Prior to Clark and McDermid’s opening, the less high profile but equally sustainable (and very first Ocean Wise certified) Daily Catch fishmonger set the pace on Commercial Drive, opening in 2011. Now the Daily Catch has just opened a second location on Davie St., in the West End, and a third in Westbrook Village, UBC.

More signs that sustainability is increasingly on the not only the public’s consciousness but also reaching well into the corporate realm came with last month’s unveiling of Vancouver’s first all Ocean Wise sushi bar. At Fairmont Pacific Rim’s Rawbar every morsel is certified sustainable. While several of the city’s sushi bars are indeed supportive of Ocean Wise, Fairmont’s RawBar (which is part of the stylish Lobby Lounge) is the first to embrace it 100 percent—and certainly the most high profile to take such a stance, right across from the Convention Centre.

In Pacific Rim executive chef Darren Brown’s eyes, there really is no other way to go:
“I knew two years ago we had to do this,” says Brown, who says much of the motivation for his decision came from the realization that, if we continue to do nothing, by the time his two small boys grow up, the oceans could well be depleted. 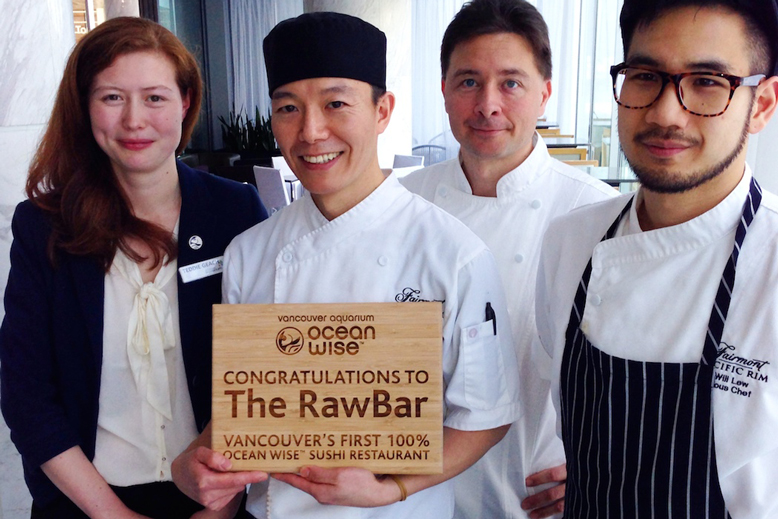 While it may not quite yet qualify as a tsunami of sustainability, the arrival of the likes of Daily Catch and Fish Counter—and the uncompromising statement by Fairmont’s RawBar—suggests that responsible sourcing has moved beyond the kitchen, and is edging ever closer to the mainstream of public consciousness.

Everyone loves a trusty brunch spot, where the eggs are always served just the way you like them, the ‘fresh fruit plate’ is actually ...
Read More