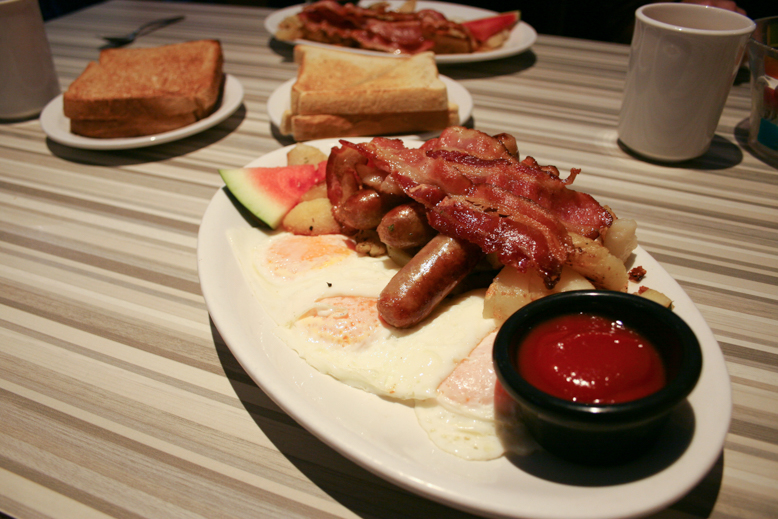 You can get breakfast all over town. Rather than making a comprehensive list, or count down of what I think are the best breakfast places around, I decided to highlight three places that I think are unusual and full of character. I picked them, not only because they are odd places to visit, but also because they are flying completely under the radar right now, and maybe they shouldn’t be so secret. 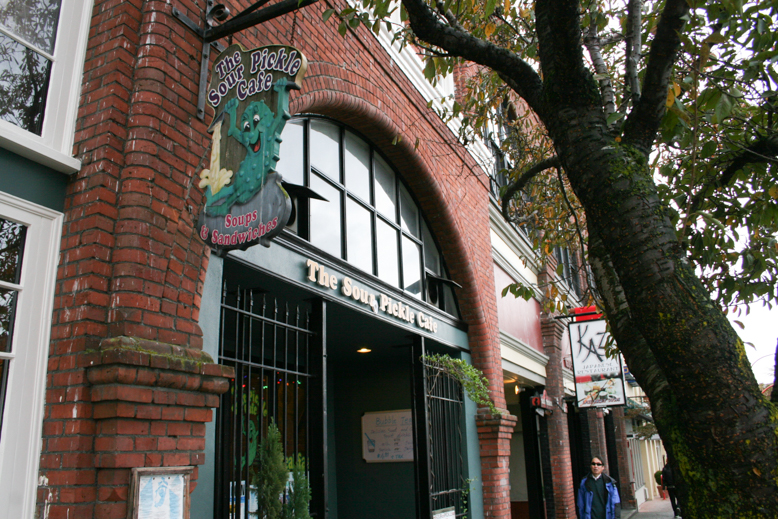 Blink and you’ll miss the Sour Pickle Cafe, nestled down where Store Street becomes Wharf, and hidden partially inside an oversized cage, with wrought iron bars that would not be out of place inside a novel by Alexander Dumas. The inside is strangely adorned with reading material and lists of specials. It is as though it is halfway between being a deli and an optometrist’s office.  There seem to be a set of patrons who come and eat at the Sour Pickle nearly every day. They are loyal and the owners know them by name.  The patrons read the newspapers and chat, and it is no trouble to join the conversation in such a small room. 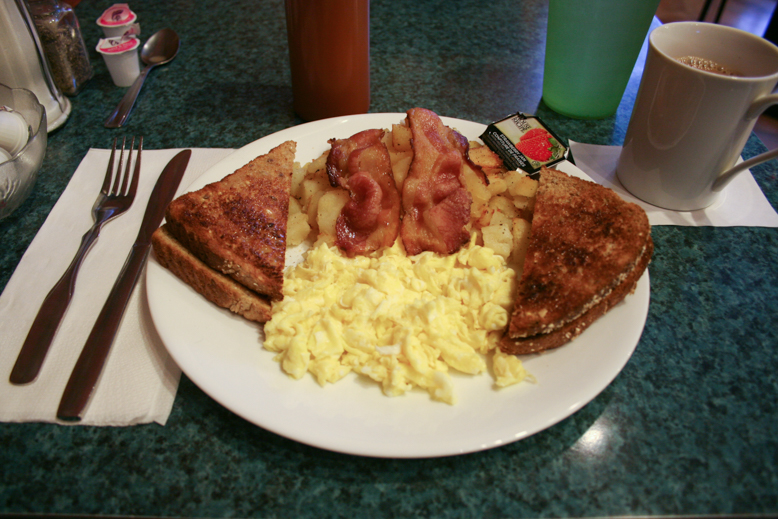 The breakfasts here are straightforward and inexpensive. The place opens early in the morning and closes early in the afternoon. I think it is fair to say that there isn’t any place with quite the same style or atmosphere anywhere else in Victoria. I mean this in the most complimentary way. When I go to eat there I feel like I am back in elementary school, having a meal for the first time at the home of a friend.  The decoration is one-of-a-kind, but the proprietors feel like a genuine mom and dad who are happy to have their kid’s friends over.

The $3.99 Breakfast at Fairway Quadra Village. 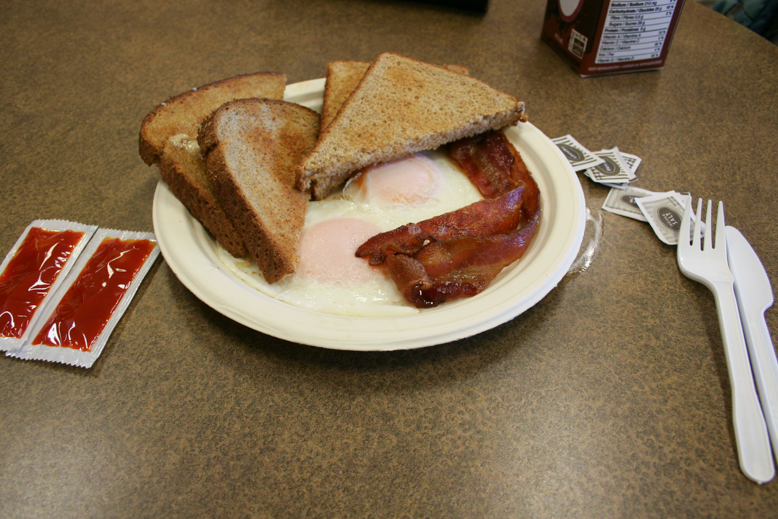 Ok, so I had breakfast in the supermarket. I just had to know what it would be like. I’d already worked my way through their Chinese buffet, the Sushi, the pork buns, and a lot of other ready-made stuff, but I thought it might be fun to go in early and complete the grand slam. Fairway is a confusing place to order because there are so many cooks and servers zipping this way and that behind the counter, sometimes it’s hard to know whom to flag down. Usually the service is very fast and cheerful, though, which leads me to believe that working in the kitchens there might actually be fun.

The breakfast is good value. It would be nice if they added some hash browns, but then perhaps it couldn’t be the $3.99 breakfast after that. I was full after I ate, however, leading me to wonder if I ever need to be eating hash browns. I’ll return to this point in a moment.

There are a few tables to sit in Fairway, just beside the salad bar. The morning I was there it appeared to be a hang out spot for the senior citizens of Quadra Village. I got a few looks as I was downing my eggs and toast, which made me feel like a fellow who’d just wandered into a biker hangout wearing the wrong colours.  Perhaps I’ll go back and try this breakfast again in another 40 years, when I’ve earned my proper stripes. 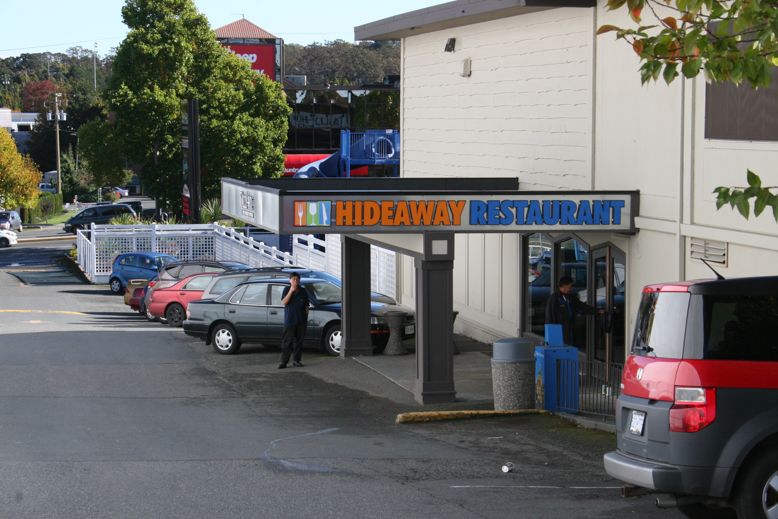 Genuinely hidden away between an almost never-used pool and waterslide, a sports bar full of people playing digital keno and betting on horses, and a “is-it-ever-to-be-completed?” construction project, the Hideaway Restaurant is not easy to find.  If you do find it, however, you will be treated to a sincerely good breakfast at a decent price. I suppose the place is ostensibly for the use of people who are staying in the hotel upstairs, but there are a few odd stragglers from the city who make it out there.

Following a conversation I had the other day with Holly about what constitutes a good hash brown, I want to highlight that this place makes hash browns perfectly. The secret to the hash brown is that the potato has to be boiled first, then chopped and fried on a griddle with spices and the fat from the bacon and sausage. Many places skip steps here and there, thus serving not very satisfying potatoes beside their breakfasts. True hash browns have crunchy bits, and soft bits, and areas of flavourful spice and grease.  It seems simple, but it still needs to be done right.

I will leave it at this for now, but I am always interested to hear other people’s suggestions for great places to have the first (and, they say, most important) meal of the day. Feel free to comment on Facebook, or drop a line to the magazine with your own ideas.

To honour the Chinese New Year, the Hotel Grand Pacific is hosting a series of events that incorporate food, fun and entertainment. Not only will ...
Read More