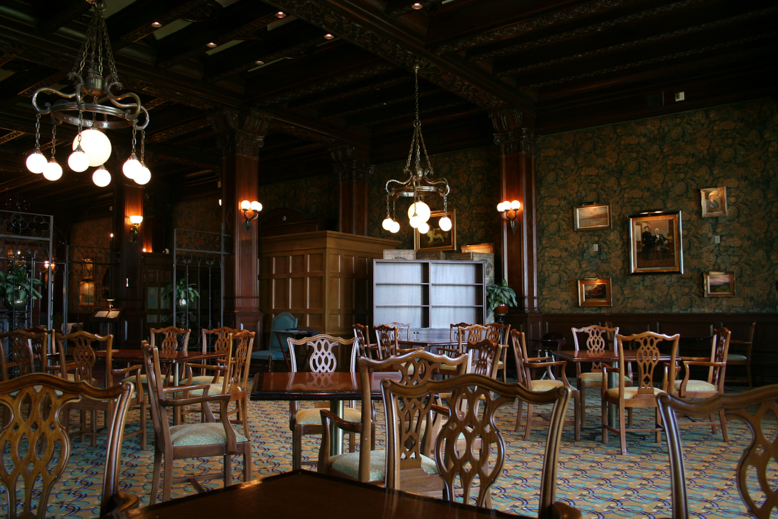 Victoria is known as a city of ghosts. Emily Carr herself is known to haunt 135 different locations daily in this town. Beyond poor Emily, there are hundreds of other ghosts roaming the alleys, haunting the guest rooms, and sitting at the ends of bars everywhere. I’d go so far as to say that having a ghost for your business is almost as essential as having a liquor licence. That said, Victoria does have a rich and sordid history, filled with unfortunate and unexpected terminations of human life. Perhaps it is good, as the ghoulish season comes upon us, to look back at a select few places where you can go and scope out indications of the unhappy afterlife, while at the same time having a bite to eat, or a nice pint. 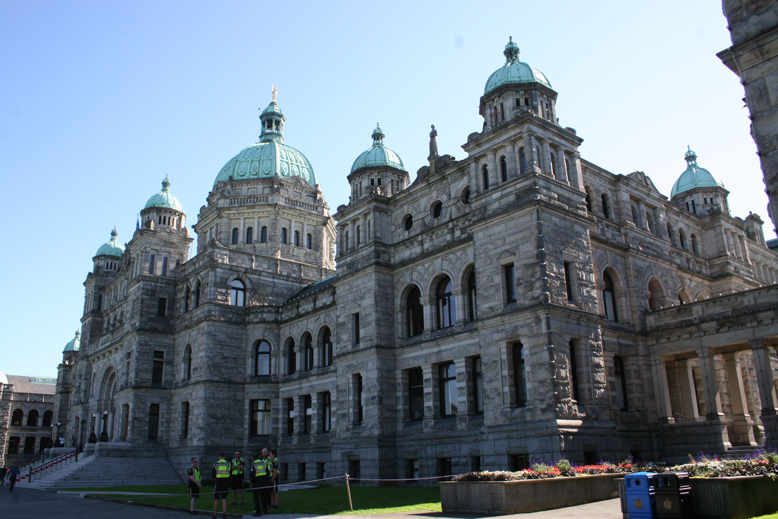 Architect Francis Mawson Rattenbury designed the legislative in the 1890s. A decade later he provided the designs for the adjacent Empress Hotel. Returning to England, he was murdered by his wife and her (18 year old) lover/chauffeur; bludgeoned to death with a carpenter’s mallet. One can not but think of Agamemnon, who too was dispatched by his wife and a young lover/servant upon his homecoming. Like Agamemnon, who didn’t bother to restrict his hauntings to Mycenae where he was killed, but rather chose to roam all over Greece, haunting everybody, Rattenbury is said to haunt the parliament buildings, despite being killed and buried in England. Perhaps there is some kind of spectral shuttle service that allows him to blow to any part of the planet that he likes to haunt things. I kind of thought people were stuck where they died, but what do I know?

Anyhow, if you can figure out how to get in, you can have an interesting and not too shabby lunch at the Parliament building and keep your eye out for semi-transparent, disgruntled architects with squashed heads while you’re at it. Eat covered the BC Legislative Dining Room a couple of years ago.

Besides Francis Rattenbury, whose ghost stops in at the elegant Bengal Lounge after a lunch at the Parliament building, there are a number of other ghosts who allegedly stay in the building. There is apparently both an old woman in pyjamas, randomly knocking on doors, and also a little girl haunting away on the sixth floor. There is also a man with a pencil moustache and carrying a cane randomly wandering the halls. Bad fashion choices sometimes live for ever. I lingered in the dining room, outside the Bengal Lounge, for some time and watched a number of tourists haunting the entrance to the bar. I went in myself and had a fancy cocktail.  I saw nothing too spooky in my travels, but I can imagine the place taking on a slightly more surreal aspect at night when the hallways are deserted. 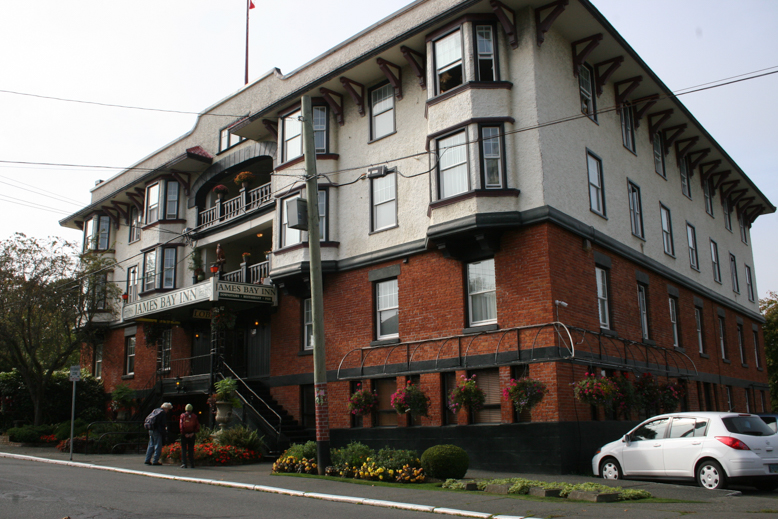 It was here, in 1945, that Emily Carr died. I visited the Inn and I visited Carr’s grave, a day apart, to take in a bit of the aura of Victoria’s most famous ghost. The grave is transformed to a miniature shrine, surrounded by pine cones and artist’s brushes pushed hopefully down into the mud, I suppose by young artists looking hopefully for a friendly ghost godmother. Unlike Francis Rattenbury, who has to travel all the way from England every day to go about his haunting business here in the West, Carr is a local, and I would be inclined to believe her spirit is still clanking about at either the Inn or the Ross Bay Cemetery. Even if you don’t see Emily Carr, and even if you don’t feel her fingers on your shoulder as you try to make a painting of yet another totem pole, James Bay Inn has a pretty nice bowl of chowder… and that has to be worth something. 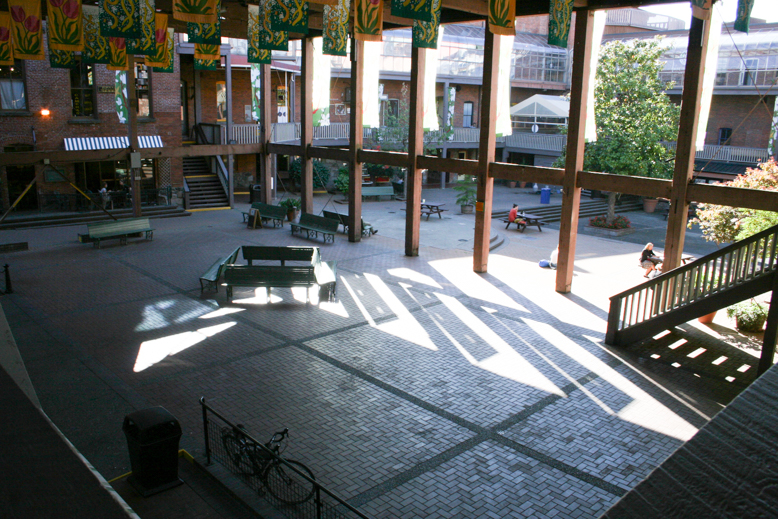 In 1898, in a fit of jealous rage, Belle Adams opened the throat of her lover Charlie Kincaid with a razor blade in a room at the Empire Hotel on Johnson St. Kincaid stumbled down the steps into the street. Adams, following him down, flung herself upon him and begged for forgiveness as he expired in the street. A policeman, passing the scene at that very moment, pulled Adams up from the body and dragged her away to jail. Adams, a prostitute, argued that because Kincaid was leaving her for another woman she was acting in self-defence. The trial was a public sensation, and as stories came out in the press, the public opinion gradually shifted to Adams’ favour. The other woman, meanwhile, dispatched herself with a pistol; likely out of dismay at the press she was getting.

All of this happened in and around Market Square, a place that in those times was peopled entirely by gamblers, demimondes, and ladies of the night. Do their ghosts still look up out of the squalor of history; perhaps giggling at the scrub job that has been done on their once wild red light district?  There are a few places around Market Square where you can grab a bite and then sit on the picnic benches to contemplate the mysteries of the past. 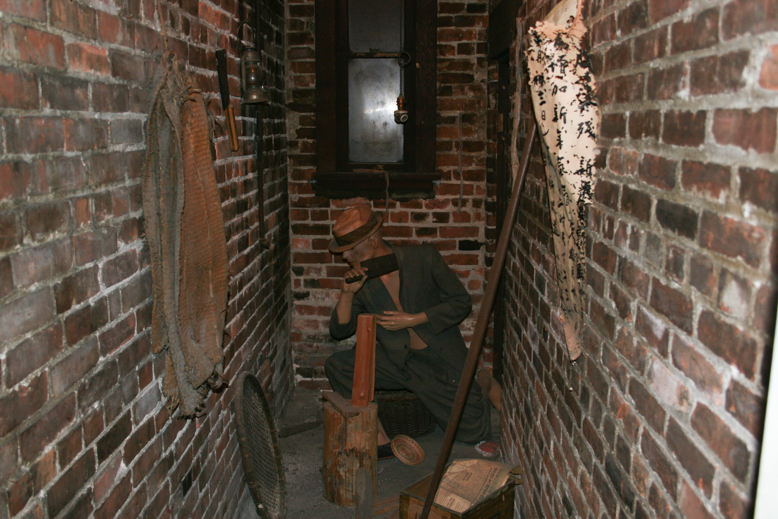 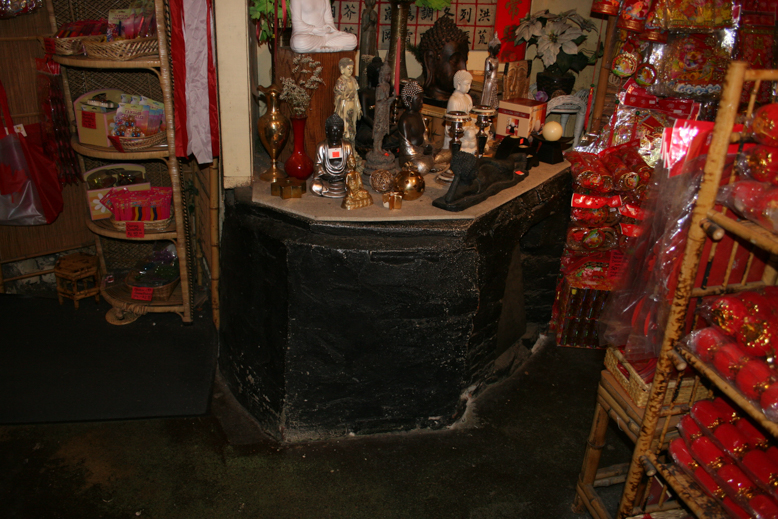 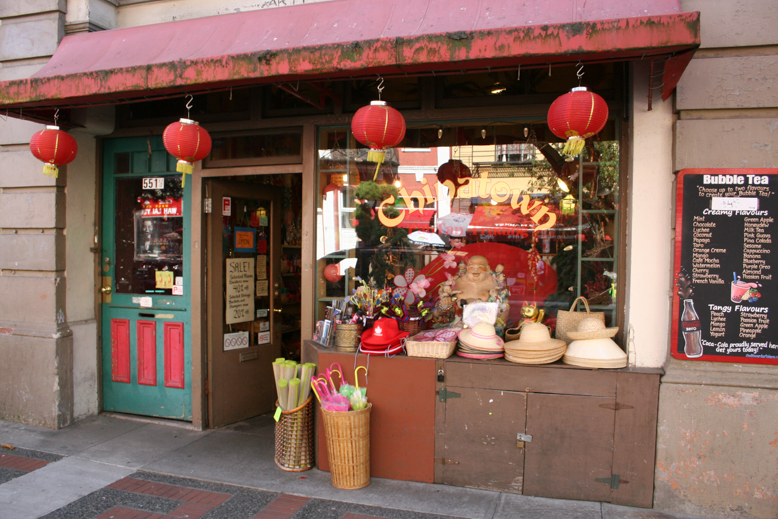 This is one of my favourite stores in Victoria. The front half, during Chinatown’s wide open past, was a tofu manufacturer. In fact, the original oven can still be seen at the back of the room, buried under some merchandise. If you follow along through the passage behind the oven you will come to a room that was once the “Double Your Luck” gambling house. There are two tiny museum type displays in the room: the original cashier’s booth, preserved as it was, and a typical Fan Tan Alley scene in a blocked off part of the alley. There is also a large glass case with artifacts from that time.  I consider it to be Victoria’s least known museum.

I talk to a woman working there about ghosts. She doesn’t believe in them. Neither do I. “No creo en las brujas, pero que de vuelan, veulan”…as the saying goes: I don’t believe in witches, but I know they can fly.  The clerk tells me that, regardless of whether the place is haunted or not, there is always a calming energy in the store.  When mothers come in with howling babies, the babies stop howling.  Everyone says the place is very relaxed and peaceful. There is always positive energy in the store. I tell her that my main feeling when I go in the store is that my house isn’t decorated nearly as stylishly as it could be.  They have some supernaturally great tchotchkes there.

The fact is there are close to a million places in Victoria that are allegedly haunted. I didn’t have time to cover them all here. Regardless of what you believe, the city has a complex history, and for a long time it was not nearly as reserved a place as it is now. Gentility has gotten the best of us, somehow, one and all. I hope you have fun this Halloween, and let loose a little.

The article on L’Apéro in the May|June issue should have stated Chef Andrea Maiolo staged at The Courtney Room and Zambri’s and that he held the ...
Read More
May|June issue on the stands. Read ...
Read More
With the new year comes new things and trends. Especially when it comes to ceremonies and events, there are always emerging trends and weddings are ...
Read More