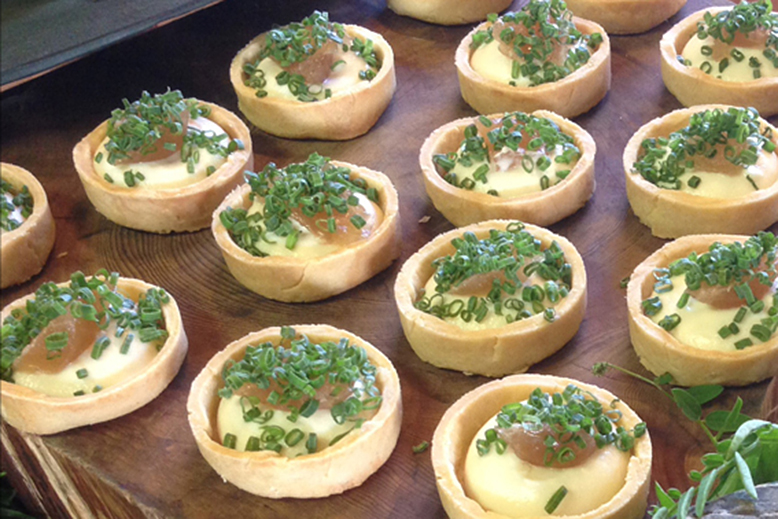 In late September I was lucky enough to be invited (along with other media) to the Wickaninnish Inn on Vancouver Island’s rugged west coast to meet and sample the food of Executive Chef Warren Barr and Restaurant Chef David Sider, who head up the culinary team at the Inn.

On the day of the dinner, the sky above Chesterman Beach had switched in early afternoon from stormy black to brilliant blue. The air was crisp and cool; the wind carried a briny bite.  What better than to gather by the fire for an autumn meal grounded in local ingredients?

With the weather forecast still a bit iffy, the planned-for venue on the beach was changed to rugged elegance—a cabin built high above craggy rocks and crashing surf. As the tide waned, you saw salty pools full of seashells emerging. The same Frette linens, bone china, fine cutlery and stemware that grace the tables in The Pointe, the Wick’s fine dining restaurant, graced a long harvest table with a window view.

Thirty-four year old Barr fills some mighty impressive wellies. Rodney Butters (now of RauDZ in Kelowna) blazed the trail for future Wick chefs with his talent and love of local. Ucluelet native Andrew Springett followed suit. Tofino’s own Nick Nutting stepped in in 2010. Recently, Nutting turned his toque over to then sous-chef Barr, in order to focus on opening his own eatery in town.

Barr put in a lengthy stint at PEI’s Inn at Bay Fortune, the alma mater of Canadian celeb chef Michael Smith. That is where he developed his love of connecting with locals. “We sourced just about everything from nearby small farms, and of course the sea. Farms aren’t as accessible here in Tofino, so Bobby Lax of the Ucluelet Culinary Guild is my portal to the rest of the island.” Lax organizes and distributes lists of what farmers are putting out (including Okanagan fruit) and he makes deliveries to the Wick throughout the week. Barr is not as concerned with certified organic he is with “small holdings that let the product speak for itself”.  I imagine Bobby is responsible for the smoked pork loin and squash with toasted hazelnuts that appear in the fourth course.

Rene Redzepi, the Dane who redefined Nordic cooking at his renowned Noma restaurant in Copenhagen, is Sider’s influence. Who knew you could forage and feast on so much local in Scandinavia? Or near Tofino. Sider’s repertoire includes the lovely dill oil we had earlier and also the hemlock oil that anoints a mound of roasted pine mushrooms. Seawater preserves (Sider boils seawater to rid it of any impurities and then simply lets produce “ferment” in it) sidle up to gooseneck barnacles napped with oyster aioli.

Barr and Sider clearly get along. Barr thinks Sider has some really “cool” ideas that dovetail into Barr’s succinct cooking philosophy, which is “Make it [the food] look nice and don’t wreck it.”

That works for me.

I’m off to make dill oil.

This is adapted from Chef Sider’s dill oil recipe with excellent results.

Trickle over poached fish and accompany with  warm fingerling potatoes tossed with lardons (or crumbled crispy bacon), a little of the warm bacon fat, a dash of olive oil and the same of balsamic or cider vinegar.

A couple of ice cubes.

Place dill in a non-reactive bowl; pour oil over dill fronds—enough to cover.

Cover and let stand in a cool place for two or three hours.

In a blender, puree dill/oil mixture with ice cubes until very smooth.

Freeze the mixture. The water will freeze; the oil will not.

Remove from freezer and strain off the oil through cheesecloth or a fine sieve.

Note: Don’t short cut by using the pureed dill and oil. The mixture is unpleasantly bitter.

The article on L’Apéro in the May|June issue should have stated Chef Andrea Maiolo staged at The Courtney Room and Zambri’s and that he held the ...
Read More
May|June issue on the stands. Read ...
Read More
OKANAGAN For the culinary-minded, dining can be a sensory experience almost unparalleled; fresh ingredients take centre stage, guided to their best ...
Read More