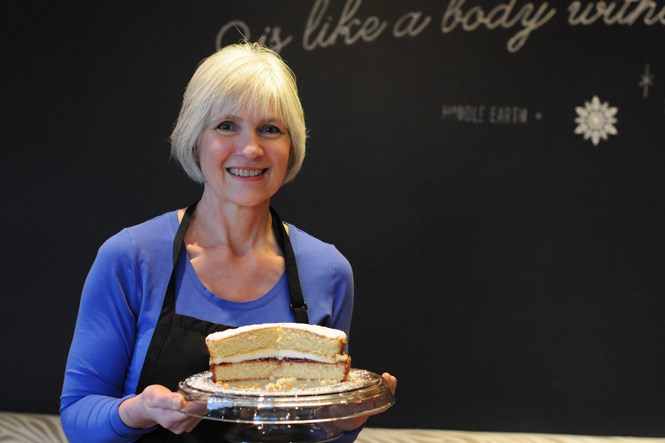 Val Blood loves coffee, gluten-free cooking, British food, and books. This all becomes apparent when you meet Val, the owner of Taste – A Place For Coffee. Val moved from North Yorkshire to Canada about two years ago. She has been cooking and baking gluten-free for herself for as long as she remembers. Val opened Taste a year ago and has grown a steady customer base with many regulars. When you walk into Taste you immediately notice the fantastic furniture—the style is midcentury modern, with many Herman Miller pieces mixed with custom pieces—the long couches—made locally in Victoria. There is also the bookcase filled to the brim with books, with a whole shelf devoted to local authors, and the giant blackboard wall scrawled with the names of places that Val and her employees have picked as their favorite book settings; places like Narnia, Ystad, Neverland. Val’s idea for Taste was to have a cafe which was comfortable enough for people to feel so relaxed in they might pick a book off the shelf and start reading!

On the food and drink side, Val picked local coffee roasters Drumroaster Coffee to supply her beans, as well as her beautiful La Marzocco espresso machine. Taste has a selection of teas from Silk Road Tea, as well as Yorkshire teas to go along with her British heritage. Phillips and Fentimans sodas are also on offer. Many of the baked goods made in-house are British, or British-inspired. One of the most popular items is called “millionaires shortbread”—a layer of shortbread cookie on the bottom with chewy caramel middle and a chocolate layer on top—a close hybrid between a cookie and a chocolate bar. Val has a large repertoire of baking and Taste has a good rotation of baked goods, so there are English tea cakes, cranberry ginger cakes, and often standard British desserts made in a gluten-free version, such as a Victoria Cake. It is the same classic sponge style as you would find in the UK and just as delicious! Val pointed out that her pricing of gluten-free and regular is the same. She feels that just because someone is a celiac shouldn’t mean they have to pay higher prices, especially when gluten-free cooking is becoming more and more prominent.

The next time you want to take a break, sit down, and read a chapter or two, why not mosey on down to Taste and have a seat, order some food and drink, and relax.

Left: an outside view of Taste. Right: The coffee bar inside Taste, with the La Marrazoco espresso machine from Drumroaster and the book shelf loaded full.

The article on L’Apéro in the May|June issue should have stated Chef Andrea Maiolo staged at The Courtney Room and Zambri’s and that he held the ...
Read More
May|June issue on the stands. Read ...
Read More
Victoria, BC The Hotel Grand Pacific is the first hotel in Victoria to offer the Vancouver-based FreshTAP system for serving high quality ...
Read More