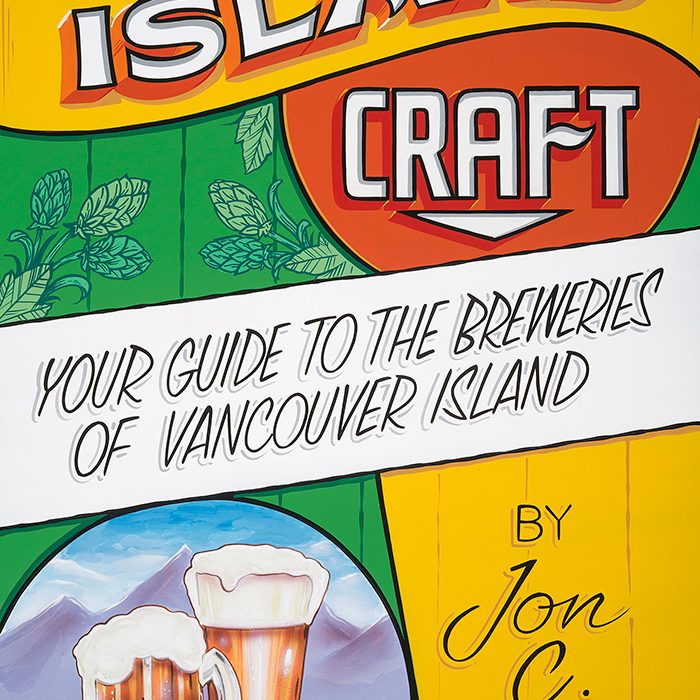 From the opening description of his first legal glass of beer in 1960 at a beer parlour in Victoria’s Ingraham Hotel through several chapters describing his 2018 “journey of a thousand sips” from Victoria to Campbell River, Jon C. Stott’s Island Craft: Your Guide to the Breweries of Vancouver Island is a thoughtful, passionate joy to read. A retired professor and author of over 20 books—including Beer 101 North and Beer Quest West— Stott is a knowledgeable guide to our burgeoning craft brew scene. More importantly, he knows how to tell a good story.

The Beer in the Burbs chapter visits breweries in Saanich, Saanichton, View Royal, and Langford and is grounded by Stott’s historical research, perceptive accounts of the personalities behind the beer making, and the author’s poetic, rapturous descriptions of his favourite brews.

Stott’s Mid-North Island section takes him from Duncan to Chemainus via Salt Spring Island and visits to craft breweries in Nanaimo and the Highway 4 ale trail from Mount Arrowhead Brewing Company to Tofino Brewing Company, finishing up with visits to craft brewers from Cumberland to Campbell River. Stott’s extensive appendices include a directory of Vancouver Island Breweries and Brewpubs, a glossary of brewery terms, a guide to beer styles, an appendix of beer ingredients, brewing equipment and packaging, and a very personal guide to enjoying beer. The final appendix offers a two-four of beer books.
For beer enthusiasts on Vancouver Island, you might only need this one book.

The 6th edition of The Okanagan Wine Tour Guide is just what it says, a wine tour guide to the wineries located in British Columbia’s ...
Read More
It often surprises me how easy it can be to take for granted, or even forget, just how incredible this island is. Sometimes it is a visitor who helps ...
Read More
Shawn Soole’s latest book swings open the doors to the world of Canadian cocktails CHIPPENHAM, UK, 20 September 2019—Hidden in the vast northern ...
Read More
Two recently published books, a novel and a travel/memoir, provide deep insight into the Chinese immigrant experience in North American restaurant ...
Read More
If you or someone you love has severe food allergies and dietary restrictions, Amanda Orlando’s new cookbook is for you. Most of the recipes ...
Read More
Three Times a Day, the new cookbook from Marilou and Alexandre Champagne, makes one very astute assumption about its readers. No matter your dietary ...
Read More

The article on L’Apéro in the May|June issue should have stated Chef Andrea Maiolo staged at The Courtney Room and Zambri’s and that he held the ...
Read More
May|June issue on the stands. Read ...
Read More
Christmas in, Christmas out, every Italian grocer/baker in the city stockpiles panettone (pronounced “pan-e-ton-ay”). Bosa and Cioffi’s, ...
Read More