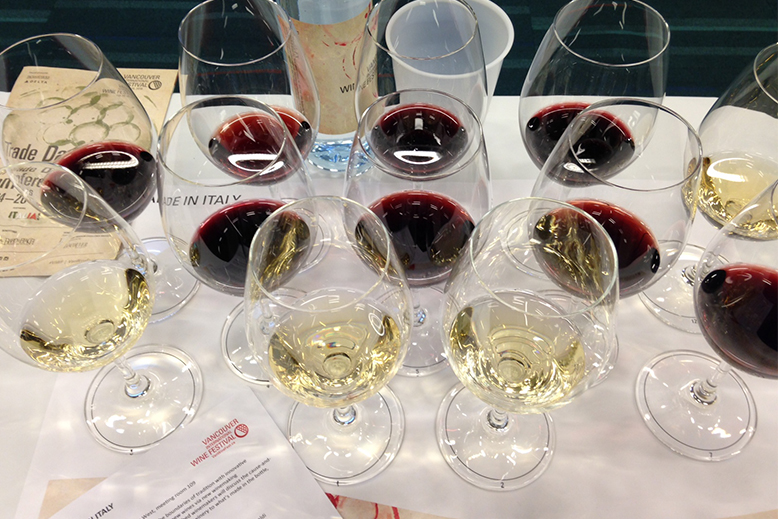 Italia took centre stage at the Vancouver International Wine Festival in February and put on a performance that drew in 25,000 people for 50+ events held over the 8 day run.

In the world of wine, Italy is a major player. It vies with France as the biggest wine producing country in the world. It is home to some iconic wines – Barolo, Brunello di Montalcino, Super-Tuscans – but it is also known for producing lakes of much simpler wines. Vancouver International Wine festival was a chance to assess whether the promised revolution in quality has truly happened.

They’ve been making wine in Italy for a long time. When the Phoenicians arrived in Puglia around 2000 BC, they found crude wine making practices. The Etruscans, Greeks, Celts and Romans followed, each influencing and entrenching winemaking. After that, things went into tailspin and Italy experienced centuries of civil instability. Italy was left splintered and fragmented. In fact, there was no “Italy” until the start of unification in 1861 and it took until after World War I for the last stragglers to join and make the Italy of today complete. So, although Italy may have a long history of making wine it’s a relatively new country and there are still significant differences in terms of culture, traditions, food, languages and – of course – grapes and wines. Add in all the different climates, soils and topographies and it’s clear why it is estimated that 350-600 different varieties are grown in Italy and why there’s such huge diversity in the wines.

Faced with over 1,500 wines in the main tasting room, I started where I always start – with bubbles. “Lambrusco” evokes memories of a sweet, strawberry scented, lightly alcoholic, fizzy drink that could barely be called wine. This is the stuff that was the biggest import to the US in the 1970s and 1980s. Italians have always enjoyed drier and better quality lambrusco (it’s a grape) and, thankfully, those are beginning to appear on our shelves. At the Festival, two excellent producers from Emilia-Romagna: Medici Ermete and Cleto Chiarli showed what this much aligned grape can do when treated with a bit of respect. They both offer traditional method (think Champagne) versions, but my preference is for the tank method (like Prosecco) wines. The lack of yeast characteristics allows the bright red fruit shine and keeps the wines aromatic and fun. Perfect for summer picnics and trays of charcuterie.

I tend to think of Italian whites as easy drinking, simple, refreshing – and really difficult to tell apart. I have slowly shifted in recent years, persuaded by some cortese and arneis wines from Piemonte to re-consider. After tasting the 2014 Marchesi de Frescobaldi, Gorgona, IGT Costa Toscana (vermentino and ansonica grapes) and the 2012 Umani Ronchi, Plenio, Castelli di Jesi Verdicchio Riserva DOCG Classico (verdicchio is the grape), I am officially retiring the “they’re all the same” thinking. These were stunning wines. Granted, the Gorgona is $85 and the Plenio is $35 and at that price point you’d expect high quality, but these wines seem to be representative of a wave of producers that are working with the land and grapes to produce wines that are unique and expressive.

It was hard to resist the iconic wines in the room and I didn’t try too hard. Thankfully, no revolution here – they continue to deliver high quality, distinctive wines. My real mission on the red front was to try some of the more obscure grape varieties. The reds from the lesser known regions, such as Puglia and Sardinia, seemed to have made a huge jump in quality. Luccarelli in Puglia offered a range of single varietal wines that hit the mark. The negroamaro, the primitivo and (my favourite) the malvasia nera all over-perform at the $13-14 price point.

Judging by the consistently good-great quality in the room, the Italian revolution has delivered.

VIWF is one of the largest consumer wine festivals in North America and if you enjoy wine and have never been – start planning for 2017 now. Make time to attend at least two of the main tasting room events and one seminar. Next year is the festival’s 39th anniversary and it runs February 11-19. If you need more incentive, next year’s focus is Canada and it launches the celebrations of the 150th anniversary of Confederation. Expect the largest showcase of Canadian wines ever assembled at an international wine festival. A true coast-to-coast experience.

July|August issue on the stands. Read ...
Read More
Is your resolution to spend less? Be more adventurous? Expand your vocabulary? Well – do I have the wine for you! While we’re facing the wet ...
Read More