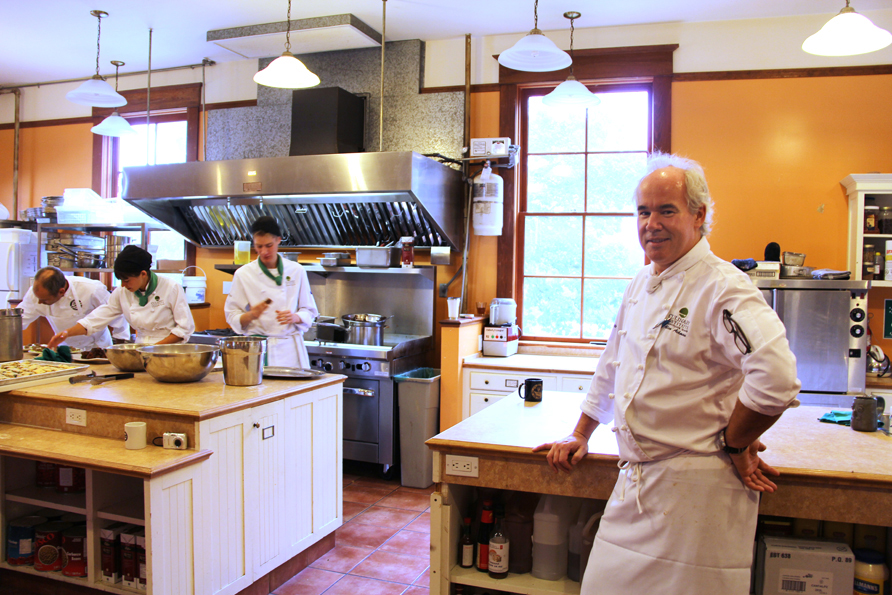 It was an afternoon delight hosted by the Cowichan Chefs Table at Providence Farm on September 15th in Duncan to honour the late James Barber. Some may remember him as the iconic Moneys Mushrooms spokesperson from the 80’s on TV or as the food critic for the Vancouver Province in the 70’s, but most knew him later in life as Canada’s celebrated chef and writer “The Urban Peasant”. Twelve chefs from up and down Vancouver Island gathered together to pay homage and create dishes showcasing this year’s apple theme at the James Barber Fundraiser for Providence Farm.

Guests arriving at the farm were presented with one of his cookbooks, a rustic wooden tasting plate, a wine glass and a warm welcome. This 3rd annual fundraiser for Providence Farm normally features stations throughout the farms historic buildings but due to weather this year it was contained to Providence House (built in 1921) and the surrounding gardens. Inside guests were free to wander from room to room while sipping, sampling and chatting with the chefs at their tables. The food was complimented by local beer, cider and wine from Philips Brewery, Merridale Ciderworks, Averill Creek Winery, Blue Grouse Vineyards, Cherry Point Estates, and Venturi Schulze Vineyards.

Under the tutelage of Chef/Instructor Allan Aikmak – students from The Farm Table (in partnership with Vancouver Island University) served up a melt in your mouth apple fritter glazed with duck fritter compote. Chef Marissa Goodwin of Organic Fair in Cobble Hill prepared a delicate apple chip topped with a rich toasted black sesame chocolate spread with salted caramel and fresh roasted coco nibs. And as no apple theme would be complete without an apple crisp – chef Kay Ehrlich of Alderlea Farm in Glenora composed a perfectly balanced apple crisp with whipped cream, basil and calendula flowers presented in petite mason jars.

Out the back doors of the farmhouse led to a spacious veranda overlooking the outside tents for more of the apple themed delectables. Chef Peter Zambri (Zambris restaurant) and Pat Barber (James Barber’s son) fired up the James Barber Memorial Oven that was donated to the farm in 2010 by the Canadian Chefs Congress to cook wood fired Pizzas. Peter cooked a savory variety while Pat was on the sweet side with a apple cider dough,  sliced apples sauteed in butter, rosemary caramel sauce, fresh basil and crème fraiche drizzled on top. Chef Bill Jones of Deerholme Farm in Duncan prepared an apple and chantrelle mushroom chutney and paired it with a choice of local goat feta, cappicola ham or liverwurst sausage from the Whole Beast Meats.

Providence Farm is the perfect venue to host this annual event to remember a member of the Cowichan Valley community. The charm of the farm lends itself to a leisurely afternoon celebration of the seasonal ingredients from the farm as well as the skill of the chefs to which they are prepared with. Pat Barber told me “Dad helped design the kitchen that feeds over fifty people for lunch every day, everyone sits down and comes together with a communal purpose. He wanted to educate people to remember that food comes from the ground and that is essentially how the Urban Peasant came about.”

I can only imagine what James Barber would think of this outstanding culinary display that happens every year in his memory. To quote him from one of his earlier cook books   he had this to say about the apple:  “Apples in lunchboxes, apples in pies and apples in applesauce… that seems to be the extent of most people’s apple repertoire. Apple juice comes in bottles, and apple leather from the health food store gets taken skiing. But the old recipes, the farmhouse recipes, don’t get much action, not even when apples are .39 cents a pound.”

I think it’s safe to say – he would have loved it.

The article on L’Apéro in the May|June issue should have stated Chef Andrea Maiolo staged at The Courtney Room and Zambri’s and that he held the ...
Read More
May|June issue on the stands. Read ...
Read More
When I was a child, protein powders were a rare commodity, consumed only by hardcore bodybuilders. Today, in our time-crunched, health-conscious ...
Read More