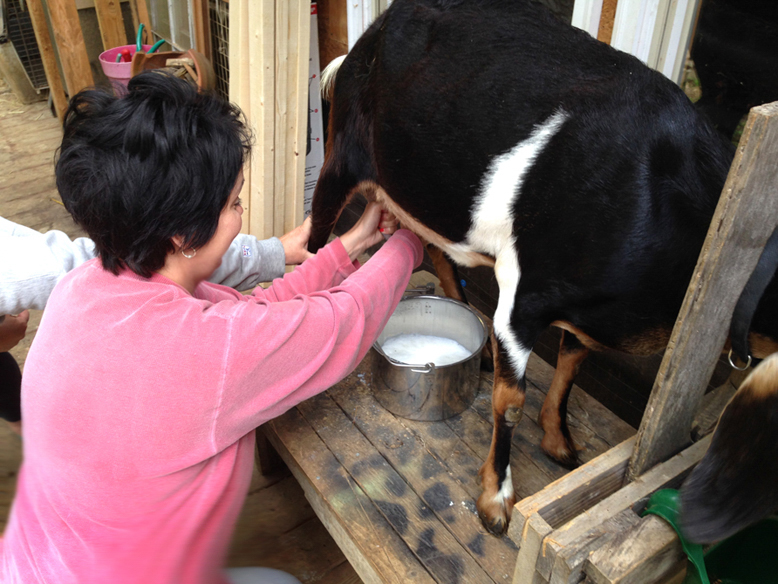 Most people I talk to have never heard of Kefir. I myself had not until I visited my cousin Sandy and her husband Don in the early days of summer this year down South in the town of Trade, Tennessee. The city of Trade is a small community located in the foothills of the Great Smokey Mountains where likeminded folks have decided to live somewhat off the grid, off the land and with their livestock. Sandy and Don left their urban city life in Athens, Georgia in 2010 and bought a piece of land with not much to it other than the trees and a natural spring/ water source. They built the house and the farm by themselves over three years using a lot of the existing wood from the property while living in a trailer until it was somewhat move in ready. I think of them as the modern day hippies, living with some key creature comforts. (i.e.: Internet, indoor plumbing, refrigeration and an oven/stove) The surprising fact that I found interesting about Trade is that it is a dry county. (Who knew this still exists in the US in 2014?) 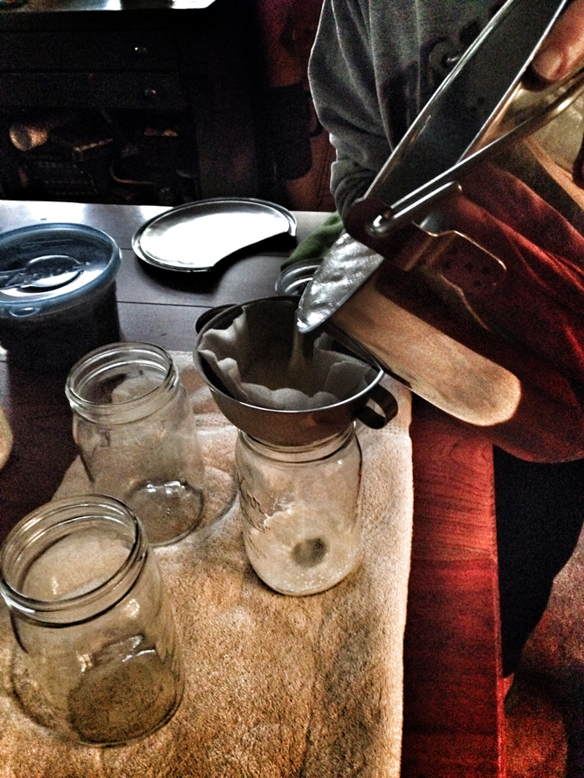 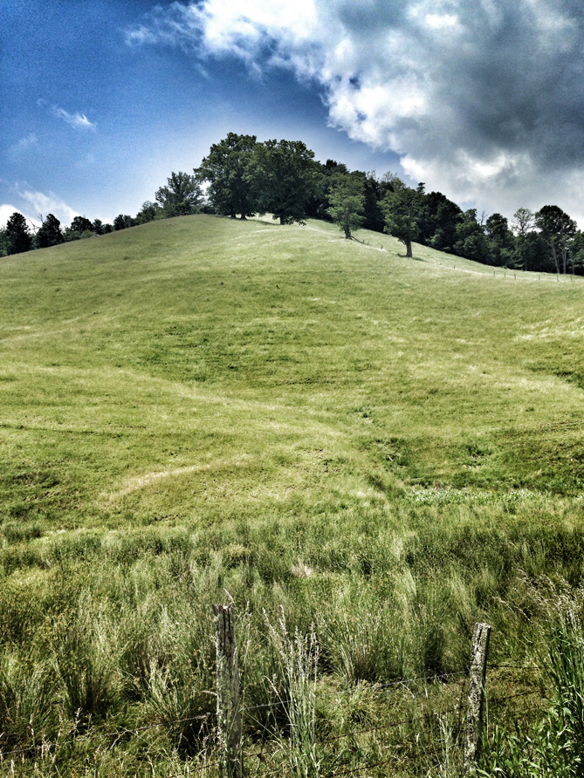 Kefir is pronounced as in “kettle and fear” and it is an age-old practice of culturing a milk beverage that originates back to several hundred years ago in the Caucasus Mountains of Eurasia. At the time of my visit to the farm, Sandy had been cultivating her Kefir for about two months.  She researched the process mostly online and decided to try it because – well, she already had the goats and the information out there on the health benefits was astounding. She told me that “It’s a fairly simple process to keep it going, you do need to be organized and consistent with your rotation but it’s convenient too because you also stop the process at any time if you need to by taking out the grains and storing them”.

To make Kefir – you need several things. First you need a milk bearing animal (or access to the fresh milk of one) such as Nubian Goats – which is what Sandy and Don raise on their labor of love farm they call Buttermilk Acres.  Secondly, you need the Kefir starter grains. Sandy got hers from a Hungarian couple visiting Tennessee for a lengthy time who told her they could not imagine not having their Kefir daily. They shared with her their knowledge and passion for Kefir as well as their freeze-dried stash of starter grains that they brought with them from overseas. (You can also easily buy the starter grains online as well.) Thirdly – you need to have the consistency for the process day in and day out. Or should I say early morning, every morning. 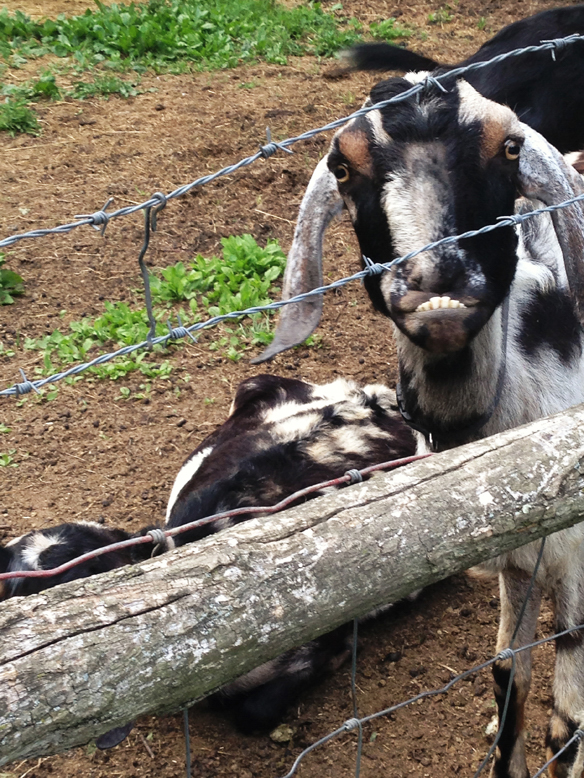 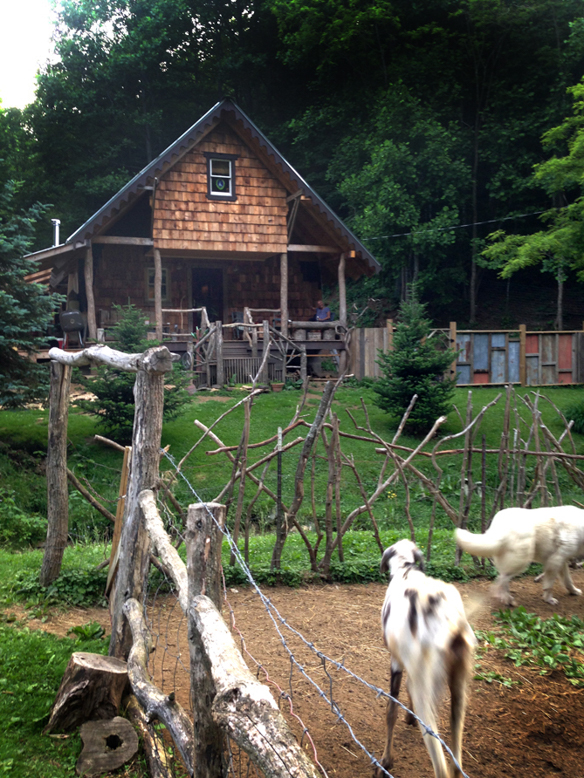 I did get up at 5am while visiting the farm to milk a goat. Never done it before, but I would definitely like to try my hand again someday. I told Sandy with a sleepy grin that it probably goes smoother once the goat gets to know you better and vice versa. I then realized that it was not all my awkwardness for getting the milk because at a certain point the goat starts to hold back and decides that’s all you are getting that day. Fair enough because after all, she has her kid to feed first and foremost on the farm (who by this point is bleating incessantly and loudly for breakfast across the pen). I pour a much-needed coffee and settle into the farmhouse kitchen as Sandy walks me through the Kefir process.

When you first start the process you take your starter grains (the grains I would describe as gelatinous off white particles that clump together much like rice) and then you add it to your fresh goats milk in a suitable container i.e.) a glass jar/lid. You let it sit at room temperature for 24 hours in a cool pantry setting. The next morning you milk your goat. Take the previous milk from the pantry and strain it and put it in the fridge. Keep the grains from the straining and add it to the fresh milk you have just done. Put that in the pantry. And you pretty much just keep repeating the process. 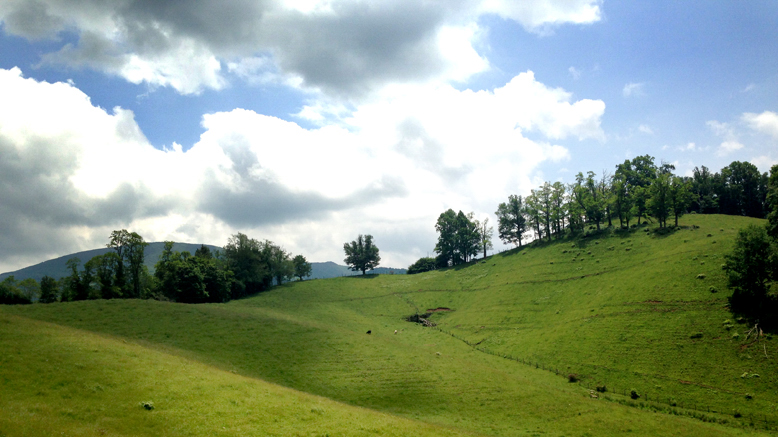 If you look Kefir up online – it claims to be the pro biotic jewel for health and digestion. There are too many claims of benefits to list here but if you research it you will see what I mean. When I tasted it, cold out of the fridge, I would describe it as a yogurt flavored milk with a slight effervescent sour tang. I wouldn’t say it is an acquired taste but I would say it is a meaty milk that is more than I am used to with its thicker consistency. It’s such a pure process that leads me to believe how could it not be good for you? The possibilities of uses for the Kefir are exactly the same as you would apply with regular milk. You can use it for making bread, skimming the top cream for butter and so on.

Simple right? It’s no wonder why the process dates back to hundreds of years because of this.

The article on L’Apéro in the May|June issue should have stated Chef Andrea Maiolo staged at The Courtney Room and Zambri’s and that he held the ...
Read More
May|June issue on the stands. Read ...
Read More
Gold Medal Plates is the ultimate celebration of Canadian Excellence in cuisine, wine, entertainment, and athletic achievement. Founded in 2003, Gold ...
Read More