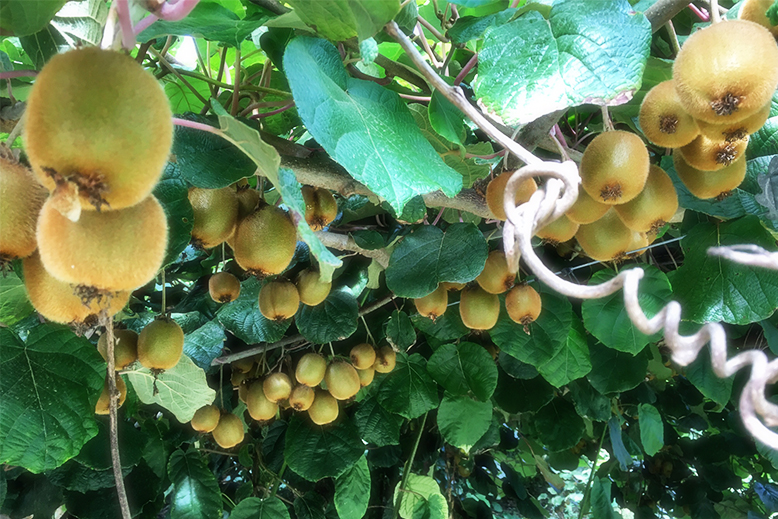 “It’s what’s on the inside that counts.”

The Internet would like us to know that, if given the chance, kiwis could cure cancer, increase your libido and solve global warming. Given that the Internet’s reliability as an oracle is questionable, let’s evaluate the situation for ourselves.

Offering more vitamin C than an orange, more folic acid than strawberries and more potassium than bananas, the kiwi gets a gold star for nutrient density. But did we need to be convinced to eat them?

A recent visit with a local, second-generation farmer and kiwi grower has left me oozing kiwi gratitude. An early winter harvest, typically the first two weeks of November, kiwi crops offer our local growers a late-harvest cash flow and our locavores something sensational to complement all of the squash and kale they’ve been eating.

If you’ve ever seen a mature kiwi vine, like the ones at Dan’s Farm in Central Saanich, your inner child will be clawing to get out and build a fort. A kiwi canopy is like a magic kingdom for anyone with a functioning imagination: a series of interconnected domed fortresses made of curling vines and thickly dressed in deep green foliage. Climb inside, trust me you won’t be able to resist, to see a ceiling of furry kiwis hanging from gentle tendrils just tempting you to pluck them. But don’t. Let the kiwi magic develop.

Farmer Dan routinely tests sugar levels, only harvesting when they reach eight percent and seeds have gone from white to black, achieved by our cool autumn nights. These local kiwis are then further ripened by spending a few days in a warm room surrounded by apples, allowing the naturally occurring ethylene to do its work. Going to market too soon will leave consumers frustrated at how long the kiwi remains hard on their counter. Grown successfully on Vancouver Island since the late 1980s, when kiwis were introduced in Canada, these vines have been known to produce for up to 100 years so we can look forward to a future full of kiwis.

• Choose kiwis that resist only slightly to the touch.

• The skin of all kiwi varieties is edible.

• Due to its enzyme activity, the kiwi is best eaten promptly once cut as the texture will deteriorate.

• A kiwi’s flavour when ripe is sweet and subtly tropical.

• Best eaten out of hand and in smoothies but also makes a delicious jam.

• One of the most alkaline of fruits.

The article on L’Apéro in the May|June issue should have stated Chef Andrea Maiolo staged at The Courtney Room and Zambri’s and that he held the ...
Read More
May|June issue on the stands. Read ...
Read More
Book Review “You couldn’t imagine the range of food available in Victoria in the 1860s,” says Robert Griffin. “It was all imported, but you ...
Read More