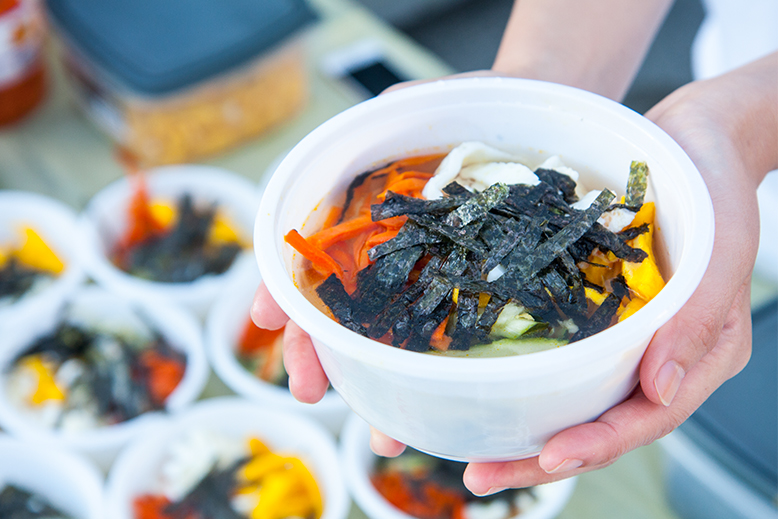 All last summer there was something going on in Centennial Square, whether it was a live concert, Fringe Fest, ferris wheel, or just a bunch of hula hoopers. Those investigating the festivities on Saturday August 22nd found themselves a rich vein of Korean culture, lying just under Victoria’s Victorian veneer. 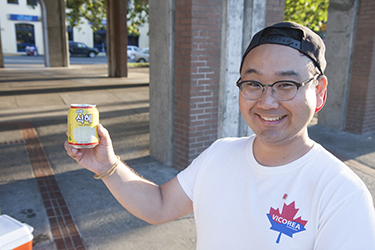 “My ideal vision is to show people what Korea is, current, future, what is popular,” organizer Victor Park told me. “We really want to show people how enjoyable Korean culture is!” This is Victor’s second year in charge of Vicorea, a free and public festival featuring interactive activities and live performances. “I don’t know if you noticed, but there are a lot of hands-on activities here, paper crafting, fan making. I didn’t want to hold an exhibition where people just walk around.” Meanwhile, Vicorea’s stage showcased traditional plays and music, as well as contemporary art such as kpop, one of the most popular forms of music all over Asia.

Of course, there was also the food. “Very common Korean food, everyone knows how to make it,” said Victor. “We simplified it… This is a street food kind of thing, so we don’t want to make it royal, haha.” Vicorea’s legion of volunteers, whether citizens, students (like Victor himself) or people on working visas labored ahead of time to be able to prepare their favourite staples en masse. Here’s what they had to offer.

“Bimim means mixing, so literally it means mixed rice,” said Victor, “but we of course mix with many different ingredients, so we have red pepper based sauce (gochujang), zucchini, carrots, ground beef, a separated egg, and mushrooms today. Normally we prepare each ingredient first and then put it in rice so nothing goes in raw.” Each ingredient is pan-fried or boiled and salted, and the combination of sautéed and seasoned veg is called namul. “It’s supposed to be very colourful before mixing, then when you eat it you just mix it yourself.”

Bulgogi was my first introduction to Korean cooking — a totally delicious, thinly sliced beef dish. “We prepared all the sauce actually at a kitchen, basically marinated the thin sliced beef for a whole day, then we put carrots, onion, some garlic, green pepper, and of course the sauce, basically a soy-based sauce. It’s got a lot of browned onion, garlic, quite a bit of sugar and some green onion and things like that,” said Victor. “The smell, people can’t get away from it. It’s one of the dishes especially for beginners, a lot of Korean food beginners love to have bulgogi, it’s quite addictive. It’s salty, sweet and all that. There are Korean markets here where you can buy thin sliced beef and pre-made sauce, you just marinate it for a day, no need to add anything and fry it and there you go.”

“So we have bimim guksu and janchi guksu, which is the one with the soup. Basically this type of noodle is not as commonly seen in Canada, it’s very thin. You have the noodle with the sesame seed and sauce, it’s similar to the bibimbap red pepper sauce, but it’s slightly sweeter. There’s also dried seaweed and pan fried zucchini on top.” The other dish is quite similar to bimimbap, except it features the noodles and a rich anchovy broth poured over it.

“This is a canned drink, you can buy it in Korean grocery stores but I don’t think most people know about it,” said Victor. Sikhye is a sweet rice-based beverage often served as a dessert. The little grains of cooked rice and semi-thick consistency make it a bit of an acquired taste, but still one worth experimenting with.

For next year, Victor is looking to build on these dishes and continue to show Victorians what’s up with Korean food. “I also want to have a menu that is currently popular in Korea, like an extreme spicy Tteokbokki kind of thing, a spicy rice cake, if I could.” I also noticed one thing missing… “There’s no kimchi here!” “Yeah!” Victor laughed. “It smells and they are picky about that.”

We can make an exception, right Mayor Helps?

The article on L’Apéro in the May|June issue should have stated Chef Andrea Maiolo staged at The Courtney Room and Zambri’s and that he held the ...
Read More
May|June issue on the stands. Read ...
Read More
Duncan, BC (August 12, 2016) The journey began with the 2010 vintage… a mild summer and cool, dry autumn allowed for extra hang time on the vine ...
Read More