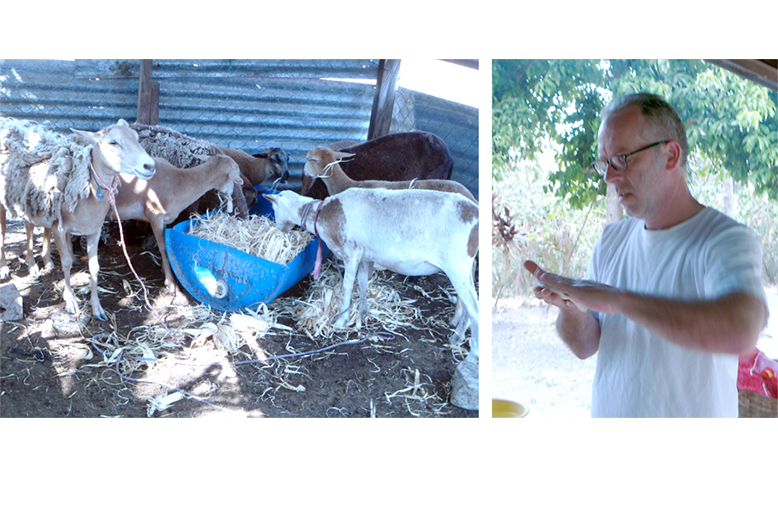 Some people eat to live, some people live to eat, and then there are people like George Szasz, who see food as an inalienable part of life, and the many nuances that living can bring. The former owner and head chef of Victoria’s Stage Wine Bar, and now at Roast, every day of Szasz’s life is filled with food. However, just over a month ago, Szasz’s concepts of food and life were introduced to a new ingredient, as he encountered the often ignored, but necessary aspect that death can also play in our daily experiences of food.

In mid April, Szasz set out on a journey with fellow Victoria chef Jerson Hernandez of local eatery Hernande’ez Cocina, to experience first-hand the life, culture, and of course food, of Jerson’s home country, El Salvador. For two weeks, Szasz was part of a completely different way of life, as he engrossed himself in the daily happenings of Salvadoran people in the rural town of Cojutepeque, just outside of the capitol city of San Salvador.

“It was kind of spontaneous,” Szasz admits with a large smile, “but when Jerson invited me to join him, I thought it would be a great opportunity to truly immerse myself in another culture and way of cooking.” Szasz toured and tasted his way around the area, sampling traditional dishes like pupusa (a thicker hand-packed tortilla stuffed with beans, cheese, and meat) and other truck-stop food in often non-refrigerated and questionably sanitized situations, and cooked in kitchens many North Americans would render almost unusable. But Szasz did use them, and in fact gained many new skills in the ways of traditional Salvadoran cooking in these modest, but educational spaces. In return for his newly learned lessons, Szasz imparted his own knowledge unto the people with knife skills and other culinary proficiencies, many of the chefs he encountered had never formally learned. However, the most important gift Szasz was able to give turned out to be an even greater gift to himself. 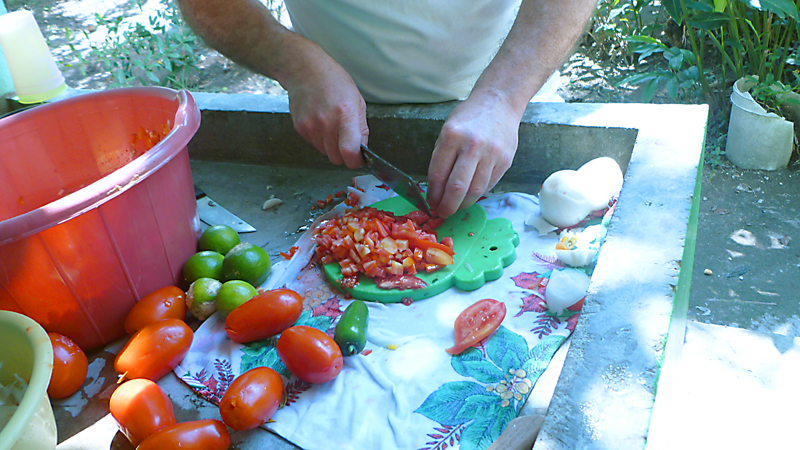 Chef Szasz cutting up vegetables in an outdoor kitchen

As a token of appreciation for the warmth, friendliness and hospitality of his hosts, he decided to buy two Perigueys, a goat-sheep hybrid found in the area. One was to be divided amongst the people of the community, and the other, was to be cooked by himself and host family, and enjoyed in a large feast. For $120 Canadian, Szasz loaded up two Periguey in the back of a pickup truck belonging to one of Jerson’s relatives. Szasz recalls the excitement of the children as he unloaded these two rare creatures, often considered even mythical by the locals.

After the children danced around the Periguey for a while, Szasz then took himself off to a quiet place with the first Periguey. In a calm manner, Szasz held the animal in his hands for some time before making the first incision into her neck that would quickly end the animal’s life. “For me, this was an incredible ritual,” he said. “Something that we should never take for granted, and that’s why I decided to have a moment with her before taking her life.” He added, “To be a chef, it is important to experience something like this first-hand and to be a part of something of this nature in a one-on-one setting.” 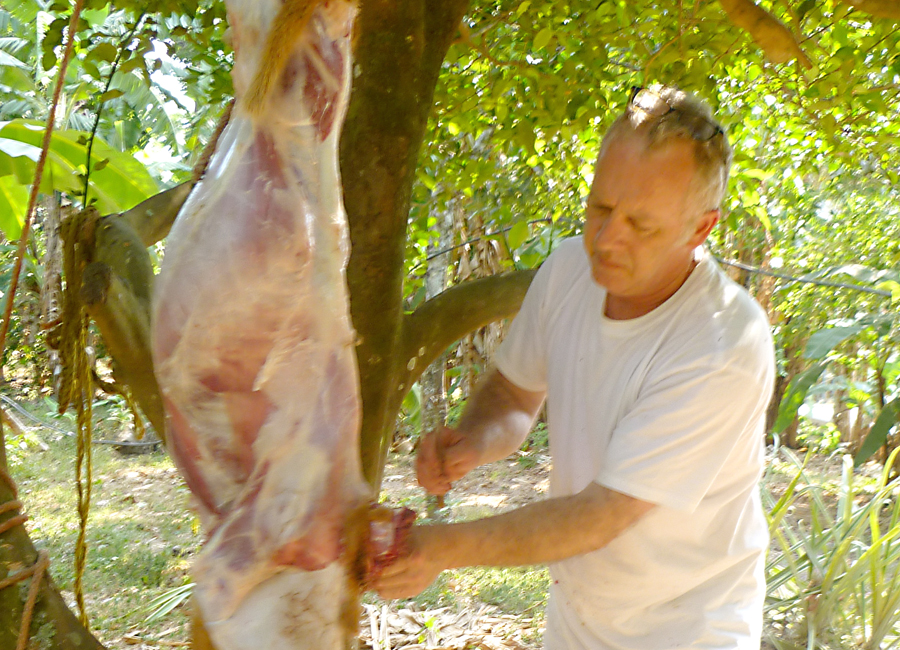 Chef Szasz skinning one of the Periguey’s

Szasz then proceeded to skin the animal, a skill he had preformed before, but never in 35-degree heat. Parts were broken off and cut up, and then given out to the locals, the significance of which Szasz admits many Canadians cannot truly comprehend. “These are relatively large animals,” Szasz explains, “and each part can feed a family for quite a few meals” continuing that “in places like this, food is the greatest gift you can give, something we sometimes take for granted in countries like Canada.”

He then repeated the ritual with the other Periguey, a task that took him about 30 minutes to complete, all on bananas leaves used as a cutting board.  On a handmade spit, they manually turned the whole Periguey, rotisserie-style, for about 4 hours, very slowly and on low heat. The seasoning was kept simple with only salt, pepper, citrus, and some ancho chilli, although Szasz recalls the smell to be intoxicating as this robust animal offers even more flavour than lamb. Szasz reminisces that 50 people were fed that night by the one animal, an act that he says shed a profound light on concepts of food, life, and now death. 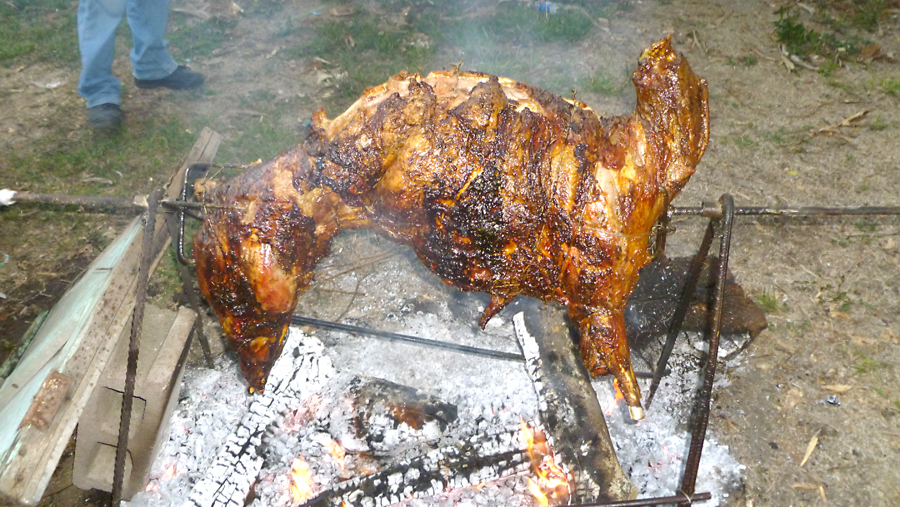 Since returning home from El Salvador just before the end of April, Szasz says that he is trying to incorporate some of the recipes, flavours and techniques that he learned abroad into his restaurant’s dishes, but chuckles that many Victorians are perhaps somewhat hesitant to try such exotic ingredients as turtle eggs, armadillo, and iguana, all of which Szasz sampled himself during his adventure. But more so than cooking tips and recipe ideas, Szasz came back to Victoria with a different type of inspiration. “I went down first and foremost for a culture experience,” he says. “ I learned how to be more relaxed about food, and to gain newfound appreciation for what I do. After so many years of being a chef, to be in a situation where that can happen is truly a blessing.” A blessing, but also what Szasz describes as a “spiritual experience”. “For me food is spiritual, it connects everything and everyone together in life. It’s such an important aspect of family and community, something that is strongly recognized by the Salvadoran people.” And something Szasz will doubtlessly hold onto as he returns to his life as a chef here in Victoria, and wherever else his travels take him.

The article on L’Apéro in the May|June issue should have stated Chef Andrea Maiolo staged at The Courtney Room and Zambri’s and that he held the ...
Read More
May|June issue on the stands. Read ...
Read More
It’s the middle of February and Gabe Epstein has a large basket of home-grown vegetables on his kitchen table. While the potatoes and garlic are ...
Read More