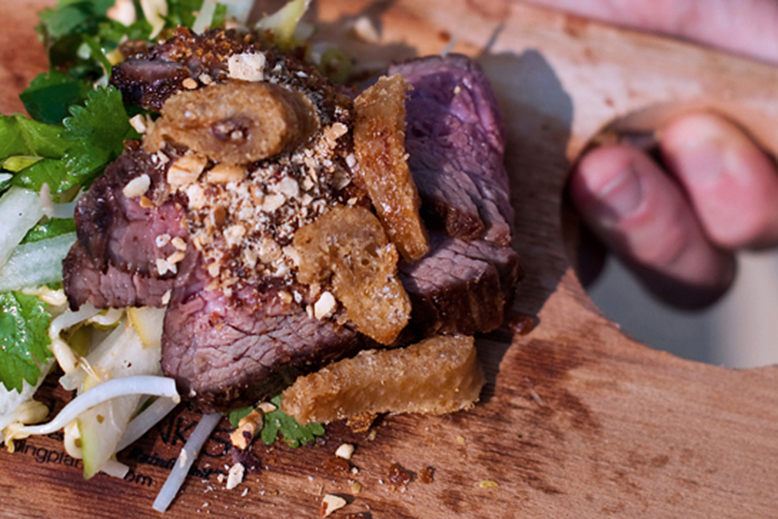 Scott Gurney was scrolling through his Twitter feed one day when a tweet about a traditional barbecue and bourbon festival based in the American Southeast piqued his interest. He started researching hybrids of this type of event and pretty soon an idea was born: Brewery and the Beast, a festival of meat—but with a West Coast spin. “We took a very specific idea and turned it into a more broad-spectrum true meat festival,” says the event coordinator and creator, “with different styles of cooking and ethnic backgrounds as opposed to one specific genre. Then, of course, pairing it with a craft beer such as Phillips was a natural fit. They helped us cultivate the idea and refine it to what it is now.”

The second annual sold-out event takes place in Victoria at Phillips Brewery on September 22. The event will see its second year in Vancouver next year, and planning has begun to bring it to Calgary in 2014. As Gurney explains, “We don’t try to re-invent the wheel from city to city, we just try to better manicure it and continually strive to make it a smooth and enjoyable experience for the chefs and guests alike. The only difference you will find in regards to size, style and experience will be the chefs who are cooking your food.”  The chefs and vendors invited are those showcasing these high-end local meats on their menus, taking part in the sustainable food system and sourcing as locally as possible.

One obvious attraction is the traditional food and drink aspect, but the event also seems to appeals to people because it is unique and like no others being offered in B.C. As Gurney can attest, “The quality of the food is off the charts and the chefs are given the green light to throw down creatively whatever protein they want to cook and however they want to cook it.” Chef and owner Cory Pelan of The Whole Beast Meats in Oak Bay, who will be at this year’s event along with more than 30 local chefs (like Tod Bosence of Veneto Tapa Lounge and Garrett Schack of Vista 18) explains it this way: “A lot of people are unapologetically embracing their carnivorous cravings these days. And why not celebrate it with beer!”

Along with Phillips Brewery, Two Rivers Specialty Meats from North Vancouver is an integral part of the event, supplying a significant amount of the free-range, hormone-free and sustainable meats. They support the event because it highlights the many local farmers and their ethical practices as well as for the opportunity to give exposure to diverse cuts of meat and whole animals that you may not find on a regular restaurant menu.

“It’s a very different style of event from what Victoria normally sees,” says Gurney. “The selection is crazy good because you have eight to ten different proteins being featured, from elk, bison, duck, turkey, beef, lamb, pork, chicken and wild boar. You name it and it’s here.”

Brewery and the Beast, September 22, 2013 from 1-4 p.m. at the Phillips Brewery “backyard,” 2010 Government St., Victoria. Partial proceeds from this year’s event will go to support the BC Hospitality Foundation.

ENTER THE DRAW TO WIN TWO TICKETS. EMAIL US AT EATCONTEST@GMAIL.COM WITH YOUR NAME AND EMAIL ADDRESS.

Hard sauce can be purchased pre-made, but it is extremely easy to make at home. The recipe below is adapted from the one my mother used (from the ...
Read More