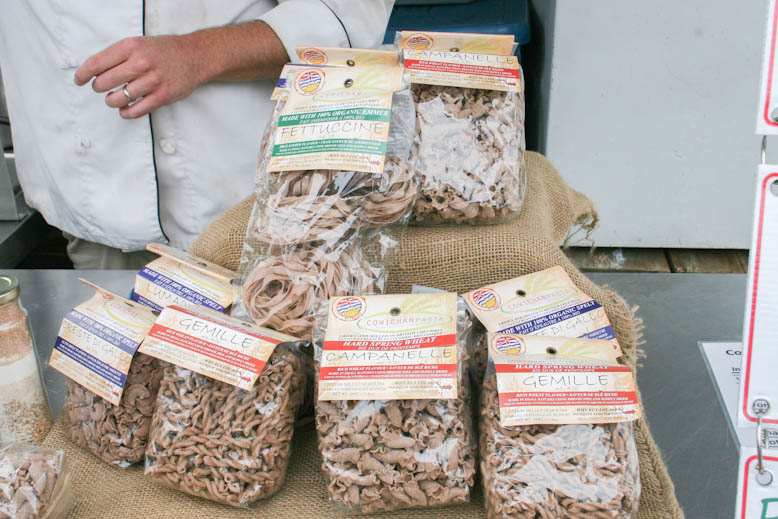 I picked my way through the Moss St. Market to meet Matt Horn, of the Cowichan Pasta Company last Saturday afternoon.  Horn’s work represents the best Vancouver Island has to offer.  His pastas are all created with locally sourced materials, starting with wheat grown on the island and milled in Cowichan Bay at True Grain.

Cowichan Pasta Company uses either hard spring wheat, grown in the Duncan area, or Emmer or Spelt.  The latter two are ancient grains, Horn explains to the lines of curious customers who come up to taste ravioli samples, and because they are organic and locally milled, are not as hard on the bellies of the gluten intolerant.  The difference is that these pure strains of grain have been spared the artificial hybridization required by the high yield demands of modern industrial farming.  It is this hybridization and processing that seems to be making people sick when they eat wheat.

The pasta itself, because of the freedom from processing, presents itself in a rich brown colour.  The flavour is fuller and slightly richer that regular pasta. I tried ravioli with smoked cheese and corn and  the asparagus and spot prawn ravioli.  In each case, Horn’s assertion that little sauce is needed was correct.  The flavour of the filling and the pasta itself is enough to carry the dish with only a little oil added for taste. 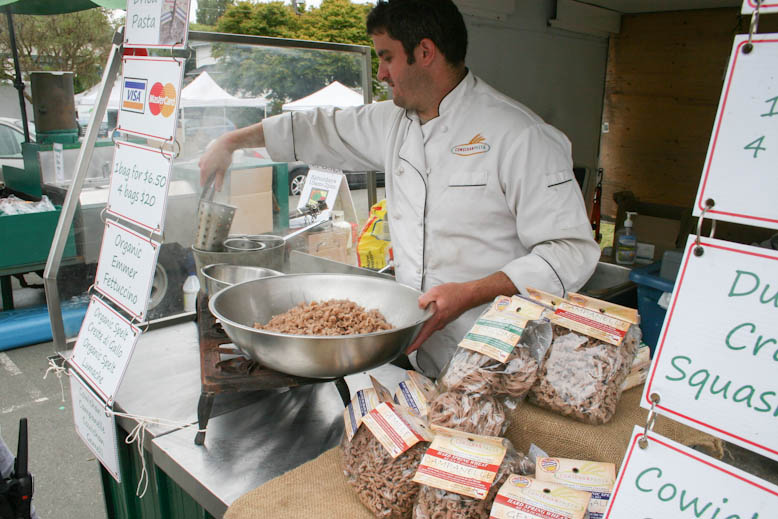 By his own admission, Horn is a taciturn man and it seems as though he prefers to let the flavours of his food speak for themselves (which they do).  Still, he will open up if you engage him on the right topics.  He delights in telling customers who are standing and waiting for their ravioli samples to cook how Emmer is the grain that humanity first cultivated.  Its conscientious planting marks the division point at which our ancestors decided to stop wandering and settled down to till the land.

Although Horn and his company are working at a variety of markets around the Island—Moss St, Fort, Duncan, Nanaimo, and others—he wants me to know that his products are available in sixty different stores, as well.  To me, Horn is representative of a trend I have been noticing since I began at EAT a few months ago.  There are quite a number of people that, having worked in the traditional food industry as chefs or line cooks for years, are now looking for more organic, local, entrepreneurial opportunities.  It’s a nice time to be here and to be a part of this budding revolution against the forces of large-scale, industrial-backed cooking.

July|August issue on the stands. Read ...
Read More
With Vancouver Fashion Week in full swing we caught up with four designers and asked them to tell us about their food ...
Read More