It goes without saying that venues offering beer will draw some sort of crowd. But when a venue offers some very special beer, then it follows they will draw a very special crowd. That could not be truer for Canoe Brewpub, which kicked off their first instalment of Cask Night on Friday, Feb 3rd. Over the next four weeks, Canoe invites patrons to “ meet local beer magicians,” and sample some special cask beers with the guidance of knowledgeable guest brewmasters. From 4:30pm to 6:30pm each Friday during February, guests can enjoy two-for-one appetizers along with $5 glasses of the featured “mystery beer.” A beer so mysterious in fact, that organiser and Canoe brewmaster, Daniel Murphy doesn’t even know what the other brewhouses will be offering. This month’s guest brewhouses include Surrey’s Central City Brewing Company on the 10th, Victoria’s Driftwood Brewery on the 17th, and Phillips Brewery on the 24th. 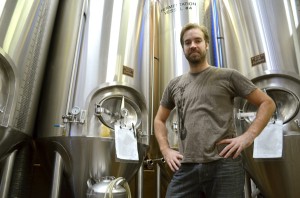 When he moved to Victoria years ago, Murphy, originally from Melbourne Australia, was instantly taken by the beer culture in this small island city. After a stint at Lighthouse Brewery, Murphy moved to Tasmania and worked at a brewing company there. During this period, Murphy was exposed to some extremely innovative brewing methods and came back to Vancouver Island with a fresh perspective on what he calls “an extremely localized brewing perspective” that doesn’t necessarily look towards other flavour combinations outside of a British Columbian base. The beer he offered at this past Friday’s Cask Night event was a true testament to his worldly perspective, as it incorporated ginger, lemongrass, Thai chili and lime notes that were perfectly balanced with the hoppy and floral base of Canoe’s classic Pale Ale.

Not only has Murphy been inspired by his travels, but being an avid cook, he is also constantly experimenting with new flavour combinations in the kitchen and then bringing those concepts to the brewery. Working closely with the Canoe Brewpub kitchen, Murphy was able to steep crushed lemongrass, chopped chillies, limejuice and chopped ginger in beer before straining it and incorporating the juices into a not-quite-ready batch of beer. The flavours integrated during the conditioning period in the cask until his “magical” creation was ready to be enjoyed by some curious patrons and an even more curious Murphy.

Although Murphy recommends this unique brew with any of their appetizers, he also states that it’s an outstanding flavour experience all on its own. And that’s exactly what he hopes to get out of Cask Month – beer lovers coming with an open mind, willing to try new and exciting cask brews, but above all rethinking the way in which beer should taste.

If you’d like to rethink the way beer should taste but can’t make any of the next three Cask Nights, Murphy is open to running another instalment at a later date. Dependent, of course, on when his next imaginative cask inspiration strikes.