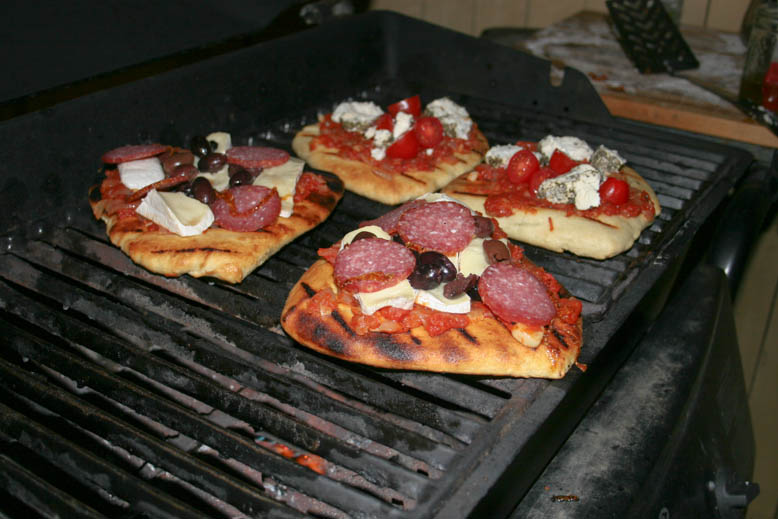 This is a recipe I got from my sister.  I believe she developed it while she was working as a chef for the Weston family at their sprawling complex in Algonquin Park.  My sister and my brother-in-law were stranded there all summer and, whenever some Weston or another decided to fly in by floatplane, the chefs had to be ready to provide whatever foodstuffs the visitors wanted.  Mostly, given that it was summer and vacation and all, they served buckets of hot dogs…but she did develop a few recipes during that time, and this is one of them.

The trick to this version of barbecue pizza is that it is cooked directly on the grill, as opposed to on a stone or a wooden board.  The purpose, according to my sister, is that you get grill marks right on the crust, adding that barbecue element.  I was trying this recipe for the first time and found that I scorched one of the pizzas because I had the heat a bit too high.  The perfection of any recipe is always a process, and she is an advanced baker compared to me. Still, I (and everyone else at the party) seemed happy with the result.

I am including the recipe much as she gave it to me.  The instructions assume some knowledge of working with bread (you will note, for example, that a glug is not necessarily an accepted standard measurement).  If you are uncomfortable with baking or sauce making, you can always buy premade dough or premade sauce.

Next, on a pastry board or counter top, add:

Make a well in top

Pour in glug of olive oil.

Add the yeast mixture to the flour mountain.  Knead for 10 minutes, adding more water if necessary, until it feels like Playdough.

Make ball and rest in lightly greased bowl. Put a dishtowel over the bowl and let rise in still and warm place until doubled in size, about 1 to 1.5 hours.

Throw the dough on a floured counter. Roll out with a floured rolling pin to make a rectangle (not to thin or it’ll tear). Place the rolled out dough on a large, floured cutting board to rest for 30 minutes.

In a fry pan add-

Bring to boil, then simmer for 25 minutes till thickened.

Toppings suggestions (so many options):

Preheat grill on the BBQ.

Oil one side of dough. This is the side getting flipped directly onto grill. Get a friend to help. It’ll be hot and awkward! Reduce heat to low.

Oil the side facing up and flip after first side has cooked for 1-3 minutes (till grill side is slightly rigid).

Now add the sauce and toppings. Close lid. Cook till underside is grilled on the bottom. If dough is cooking too fast- before cheese has melted then turn BBQ off and keep lid closed. 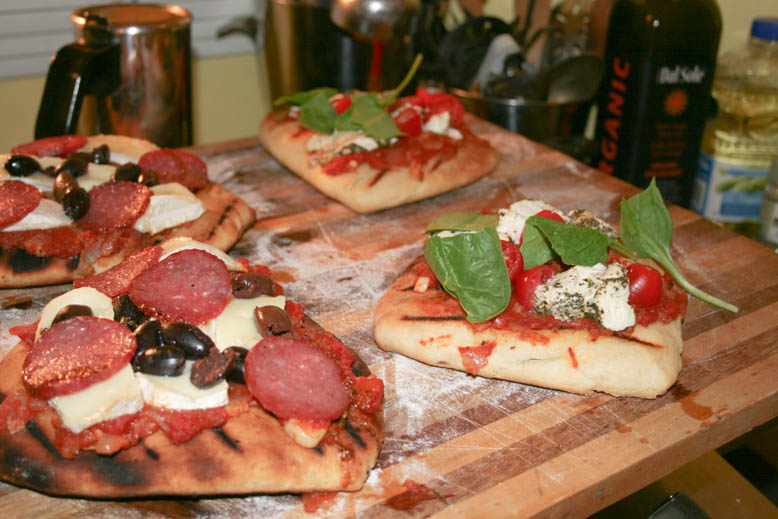 I chose to heat the barbecue and then turn it down about five minutes before I put on the pizza.  I believe it was still a bit too hot.  You could experiment with your own BBQ to find the sweet spot.  Also, I believe I made the dough a bit too yeasty—too much sugar to yeast.  The crust rose more than I anticipated while I was cooking. The sweetness of the crust, though, balanced out the flavour, according to the people at the party.   In terms of toppings, I cooked one pizza with chèvre, cherry tomatoes, and added fresh spinach after the pizza was fully cooked. The second pizza had salami, Brie, and pitted Kalamata olives.

Every time we try this, we make the pizza and ourselves a little better, good friends!

The article on L’Apéro in the May|June issue should have stated Chef Andrea Maiolo staged at The Courtney Room and Zambri’s and that he held the ...
Read More
May|June issue on the stands. Read ...
Read More
Pacific Rim College is pleased to announce the launch of a pioneering food event. The Feeding Ground: Inspirational Conversations with Victoria’s ...
Read More