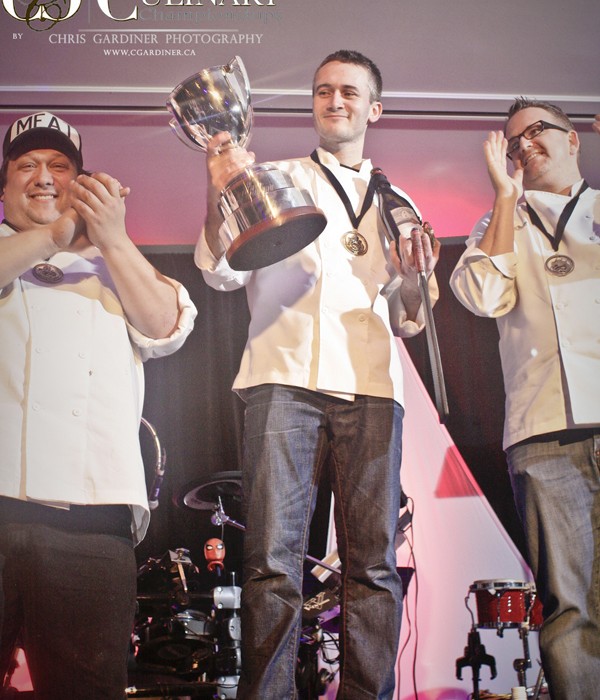 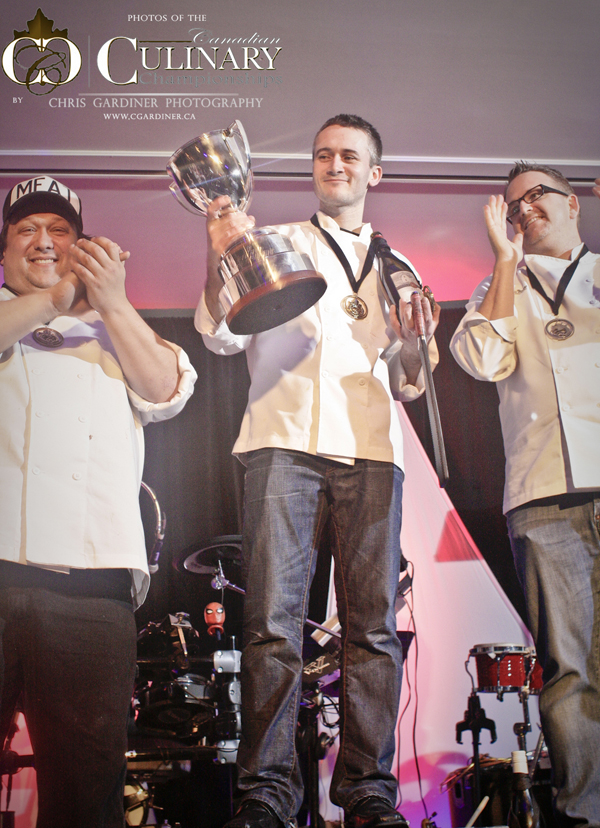 February 12th, 2012 Kelowna B.C. – The competition was fierce, the determination was evident as nine of Canada’s best chefs competed for top honours during the coveted Gold Medal Plates Canadian Culinary Championships on February 10 and 11, 2012 in Kelowna , B.C.

The new Champion, Marc Lepine from Atelier, in Ottawa, won with his delicious dish of Quadra Island Scallops with potatoes, Truffle, Chanterelle, Chorizo and Lemon paired with Hidden Bench Estate Chardonnay 2009 Marc’s reaction when he realized he won – “I could not have done it without my team, I looked around to make eye contact and thank them all. I was so happy for them and for us, this truly was a team event!”

Amid high fives, cheers, applause and tears the winners of the bronze and silver medals were announced. Jean-Phillipe St-Denis, from Kitchen Gallerie Poisson, Montreal, took the bronze, and the silver was awarded to Rob Feenie of Cactus Club Restaurants, Vancouver.

The two-day event started with a Friday evening Mystery Wine Pairing at the Hotel Eldorado, where chefs prepared a dish they felt perfectly suited the mystery bottle of wine they had received the evening before. They were given $500 to shop for ingredients to provide small plate nosh for the 300-plus guests in attendance. Invited guests were able to taste the chefs’ creations and cast their own ballot. Emerging as the people’s choice winner for this single event was again Marc Lepine from Atelier, in Ottawa.

The Grand Finale at the Delta Grand Hotel saw the nine chefs competing in an all-out slamdown competition; dishes were partnered with their chosen winery. The evening was simply delicious, with the very best of Canada’s culinary scene fully in evidence.

James Chatto, Gold Medal Plates national culinary advisor and head judge, was very impressed with this year’s competitors. Experienced veterans and eager young bloods battled for the recognition to be called the best in Canada. He said, “I think this was the smoothest, purest Canadian Culinary Event we have ever had.”

The Grand Finale event at the Delta Grand Okanagan was the hottest ticket in town. Playing to a sold-out audience of 600 wine and food enthusiasts were Ed Robertson from the Bare Naked Ladies and Barney Bentall who headlined the entertainment. Olympians and Paralympians in attendance included three contenders for medals at the Olympic Games in London: Adam van Koeverden (Olympic Gold, Silver and Bronze medallist in canoe kayak), Scott Frandsen (Olympic Silver medallist in rowing) and Catherine Pendrel (World Champion in mountain biking). Also in attendance were local sweetheart Kelsey Serwa (World Champion in ski cross) Chris Le Bihan (Olympic bronze medallist in bobsleigh), and Kristi Richards (Olympian in freestyle skiing). Adam van Koeverden (The MC for the event): “Truly this event has outdone itself again!”

As well as indulging in amazing food and wine, Saturday night guests were able to compete for items during the live auction. Some of the items up for bid were experiences hosted by Olympians and celebrities and included under the Tuscan Sun with Jim Cuddy, and Wining and Dining in Napa with Olympic gold medallists Alexandre Bilodeau and Jennifer Heil.

This memorable two-day event will be held in Kelowna for five years with proceeds from Gold Medal Plates given to the Canadian Olympic Foundation to support high performance athletes.