With every curve on the windy road leading up to the Westin Resort at Bear Mountain, I can’t help but think how lush the surroundings are of this rapidly growing area. With its massive undertaking, years of construction, and mark as a cornerstone of growth on Southern Vancouver Island, Bear Mountain is viewed in many different ways by locals and residents. Personally, having never been before, I was slightly apprehensive as to what I would encounter, since Victoria to me is still the quaint small city on the harbour that I knew it to be when I moved here in 1999. However, as all places must do to keep with the times, this part of British Columbia too has evolved and expanded. The Westin Resort, despite clearly creating an identity as a community, appeared welcoming with large stone buildings, a muted colour palette that allowed the colours of the breathtaking scenery to explode around you, and a view of Mount Baker that peaked out above the encroaching rain clouds. With a fireplace to greet and large windows presenting the bounty of West Coast landscape, the Westin seemed to be more of a familiar friend than an unexpected acquaintance.

An established resort for ten years now, last month they welcomed Victorian native Mark Wadsworth as the new Executive Chef. With fourteen years in the kitchen, and ten of them overseas in London, he has carved out his expertise in renowned kitchens such as the Grosvenor House, Westin Whistler Resort, and the Fairmont Waterfront Hotel in Vancouver. He has garnered skills in both the UK where working from 7AM to 1AM was not uncommon, and on the West Coast where the relaxed mentality granted more leeway in taking time to think about what was being accomplished in the kitchen. Considering these experiences, it is clear the duality of his character will be a welcome fit for a role that invites innovation and ingenuity, but also, come wedding season will require the dedication of long, hard hours.

As a father to three young girls, promoting a healthy lifestyle, inspiring people to think more critically about where their food is coming from and which ingredients are seasonal, are important components to Chef Wadsworth. Despite this being the first time he has assumed the role of Executive Chef, he radiates a strong willed and determined attitude towards achieving his goals at the Westin. As someone who considers himself to be straight up and honest while running his kitchen, the approach he takes in managing fourteen employees focuses on inclusion and pushing everyone to be better than when they first walked in. Finding a sense of team mentality where each individual has the opportunity to contribute to the betterment of the establishment is something Chef Wadsworth values, and as a result this unity will reflect in the quality of the dining experience. 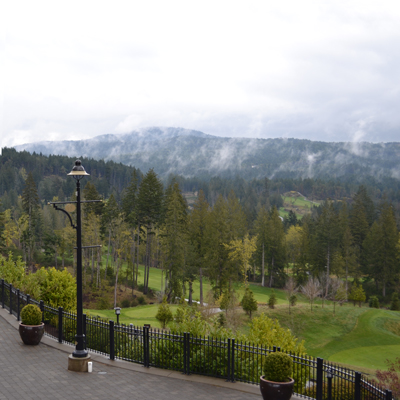 The view from Master’s Lounge.

The menu Chef Wadsworth is crafting will vary depending on whether you’re dining at Italian-inspired Bella Montagna, the adjoining Masters Lounge, or on the Oasis Patio. There will be overlap from the comfort cuisine menu at Bella Montagna, however, come sunny days they will be firing up the barbeques to allow for poolside lounging and summertime bites. With talks to try and incorporate sushi, a West Coast favourite for the Patio, some of the staples offered at Bella Montagna include risottos, lamb and artichoke ragu, and roasted tomato bisque. In an effort to be more conscious of wasting less and incorporating ingredients from our backyard, he has teamed up with Vancouver Island Brewery and is in talks of using the spent grain from their Bear Mountain Honey Lager and reintroducing it into baked goods such as slider buns and pizza doughs. As well, with Chef Wadsworth being a third generation beekeeper, he will be integrating the honey offered up by the three hundred thousand bees they’ve housed for the past few years into the kitchen and house-made lip balms.

Making the menu more relatable to not only guests, but locals from the Island, is a major reason that Chef Wadsworth is trying to focus on high quality ingredients and welcoming meals. He believes the best food is simple, fresh and easy to understand. Although there is a time for intricate and complicated dishes – which he does enjoy preparing – he wants to create an overall culinary experience that makes guests feel as if they’ve just enjoyed a home-cooked meal. With Bear Mountain being a large development that exudes grandeur, making the food approachable is key to appealing to a broader array of visitors. With other initiatives to be revealed in the summer that promote local nourishment and encourage healthy education, thus giving back to the community he grew up in, Chef Wadsworth seems to have some inventive ideas that celebrate high quality, hearty food that seeks to bring people together.

The article on L’Apéro in the May|June issue should have stated Chef Andrea Maiolo staged at The Courtney Room and Zambri’s and that he held the ...
Read More
May|June issue on the stands. Read ...
Read More
When I was in Vegas a couple of weeks ago, one of the 20 or so eateries in the casino resort I was staying at was rumjungle. Much like everything ...
Read More