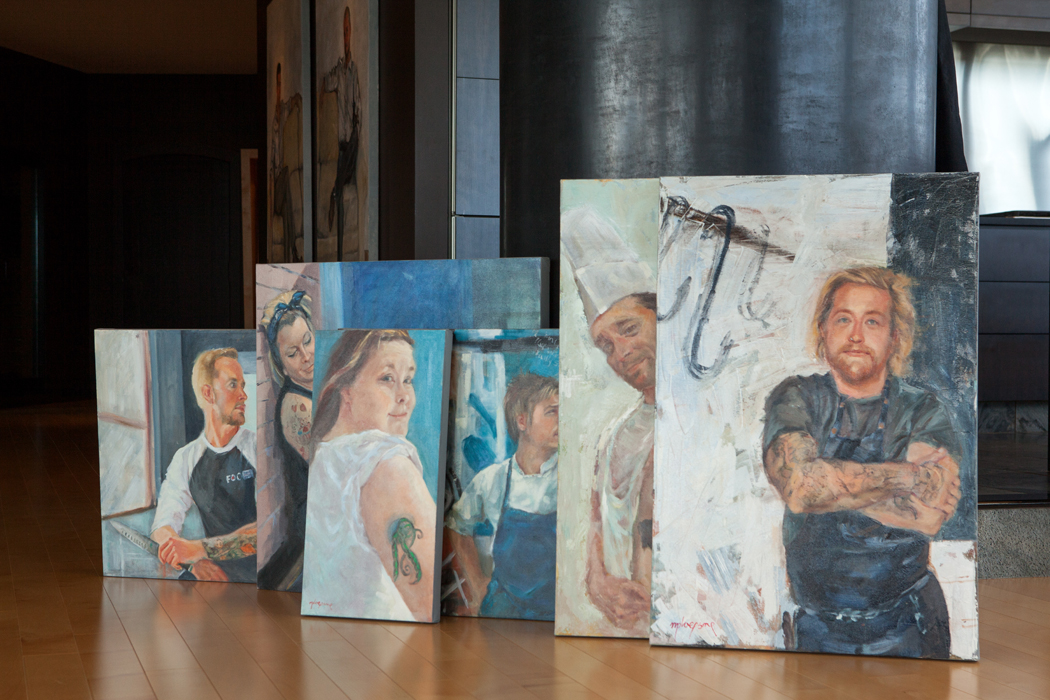 It was an unforgettable afternoon. Mary Ploegsma served us David’s Tea’s vanilla chai with sweet local strawberries and chocolate biscuits. The sweeping views from the open-concept penthouse were stunning, but the chefs held our attention.

Ottavio’s Gen Laplante was there, so was Zambri’s Lou Vacca. He was pulling up his shirt, showing off his bison tattoo. Matt Sowiak, from Farm + Field Butchers, was taking a break and Patrick Lynch from Foo gripped a sharp knife, but his focus was elsewhere. Vin Coco’s Heather McCormack? Chilling on the stoop, happy and relaxed. And that’s only a few of the chefs who were there.

To be clear, these tattooed chefs were all captured in Mary Ploegsma’s oil paintings. The art trifactor of food, tattoos, and painting inspired Mary to explore The Tattoo Series I between commissions.

Mary’s deep love of food and art have always been with her. As for tattoos? Well—“I’ve never much-liked tattoos,” she admitted, “though one of my sons is covered in them.” A combination of painting rock musicians and her last decade living half the year in Victoria, where tattoos are ubiquitous, gave Mary an appreciation for their artistry and intricacy. Observant, curious and keen for a challenge, she took on painting chefs and their tattoos; “I wanted to catch the shadows that fall on the tattoos from the musculature and shape of the body.”

Born and raised in England, Mary enjoyed art as a child and youth. After studying the culinary arts at Birmingham School of Culinary and Domestic Arts. To pay for the compulsory pastry chef, chef, butcher and server uniforms, and all other necessities, she went to work, serving at the Canon Grill, a steakhouse. When the kitchen was short-staffed, Mary flipped steaks. “My studies suffered because I had to work so much,” she reflected.

Mary’s husband Wob’s profession landed them in Houston, Texas, where they have lived for more than thirty years. There, in 1985, while attending a “day out program” for new moms and their infants, Mary peeked in the window of an old cottage and saw a woman teaching a group of ladies to paint in oil. “Come on in!”—And she did. Mary’s incubating passion for art and painting flourished, studying with several artists including Dick Turner, Scott Burdick, Carolyn Anderson and Hongnian Zhang. Her first commission was in 1996, and now her portraits are in private collections around the world. 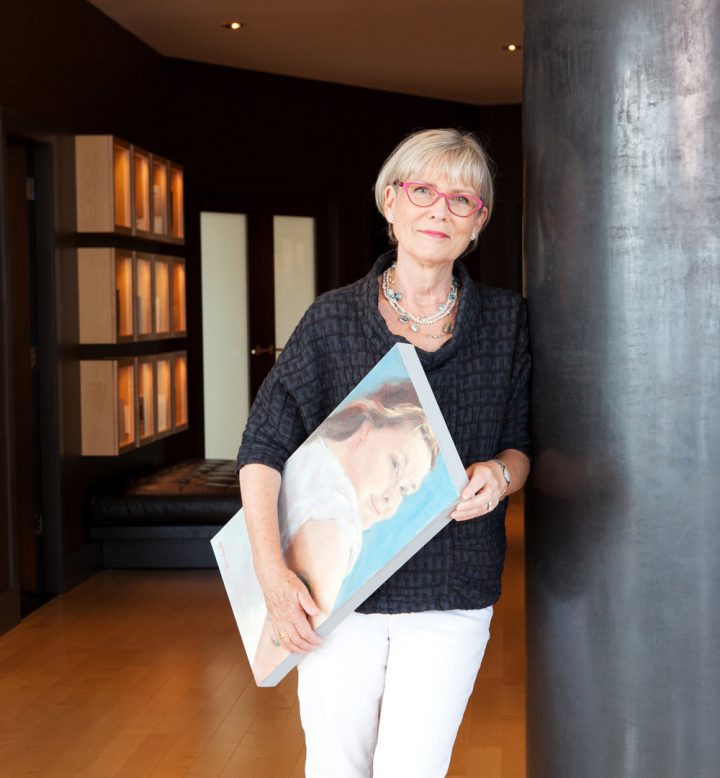 Artist Mary Ploegsma with one of the first paintings in the series.

The Tattoo I series showcases ten tattooed Victoria chefs and artisans. Mary explained, “I’m not an impressionist or a realist. I just paint the face and hands until they are just there.” As photographer Jacqueline Downey set up the canvasses for the photoshoot, I scanned the canvases. They all exhibited unique and articulate sparks of personality in posture and expression. Dylan Casimiros, former Assistant Chef at the now-closed Camille’s’, looks far off to the right, standing amidst graffiti from the alley behind Camille’s. Sophie Fenton, the former Executive Chef at Vis à Vis bouchon~bar and The Penny Farthing Public House, looks both devilish and intent. Mary shared that it was essential to “know what to put in and what to leave out–because the eye fills in the picture.”

One of the first canvases was of Gen Laplante, Ottavio’s General Manager. They met when Gen was giving classes at Cook Culture. In the series oil painting, there’s a warmth and openness in Gen’s face as she displays the sweet pea tattoo on her shoulder.

The series complete, and a couple already spoken for, Mary was wondering what to do with the rest of the paintings. She heard about Eat the Future, a fundraiser benefiting both the Gary Hynes Foundation and the BC Hospitality Foundation at Boom + Batten restaurant on October 28th. Gary, a former musician, owned and ran EAT Magazine from 1999 until 2018 when he unexpectedly passed away. A sincere person with profound love, appreciation, and mastery of food, Gary was well-respected for supporting up-and-comers and for always being encouraging and positive to establishments and individuals alike. To continue his legacy, the Gary Hynes Foundation was established to provide grants and scholarships in the culinary, journalism, and music disciplines (monies raised at this event will go towards helping culinary students in their last year of study). For Mary, donating the paintings for Eat the Future’s online auction was a natural fit, as she understands first-hand how hard it is to study when you have to work. “I want to make learning easier for culinary students. Getting your red seal is important. I want to help.”

Packing up, sipping the last of my tea and enjoying another strawberry, I thanked Mary for her time, honesty and hospitality. Making a mental note to attend the fundraiser, I looked over her shoulder to quietly thank the chefs and artisans for their time as well. I couldn’t help it—they seemed so real.

Staff, volunteers and board members from Victoria’s Belfry Theatre have been raiding some of Victoria’s best wine cellars to find rare and ...
Read More
On August 20, 2019, Ocean Wise and Eagle Wing Whale and Wildlife Watching Tours teamed up to present the first in a series of speaker events in ...
Read More
July 12th marked the evening of Power To Be’s very first Nature Gala (formerly known as Power to Golf) – a fundraising event full of wonderful ...
Read More
Stillmeadow Farm Presentation to Tom Henry from ICC and Slow Food Vancouver Island Present in photo from left to right: Steve Walker-Duncan – ...
Read More
January can be tough around these parts. In fact, it has come to be so globally known as such, that the third Monday of each January has ...
Read More
Blue Monday Pop-Up Bar – Monday, January 21st, 2019 5:00pm – 10:00pm Stage Wine Bar presents: 100 Proof Blues – a Blue Monday pop ...
Read More