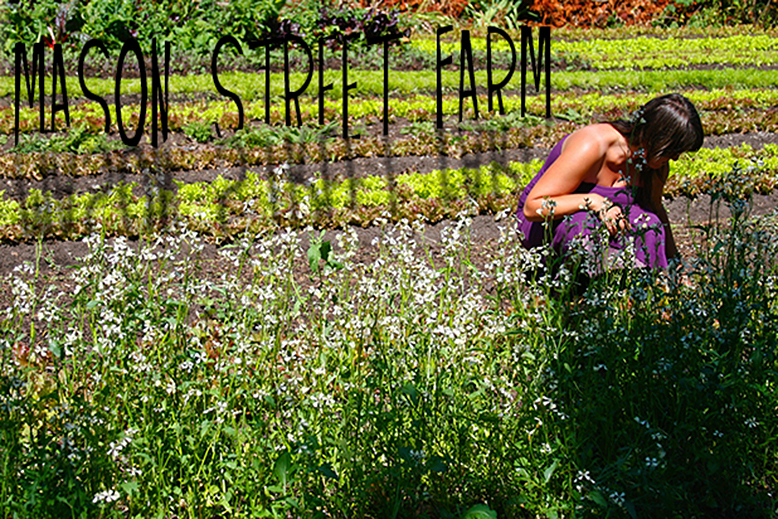 Walking past old bike frames strewn across mesh wire fencing and overgrown bushes, you would never expect that an entirely cultivated, half-acre of land stretches between Balmoral and Mason in the very heart of Victoria. Nestled into a residential area, a mere ten minute walk from downtown, lays one of the first urban farms in Canada. Unlike many urban farms that are created as plots of land open up in city areas, Mason Street Farm had the neighbourhood develop around them. The land has been cultivated since the early 1900s and Mason Street was in fact named after the first family who owned the property. Passing from the hands of Brett Black, who championed one of the first chicken bylaws in cities, to Paul Win Stanley, who increased the composting system and soil production, to Rev (he only goes by the one name)  who took over the farm after a few years of neglect, this space has been a central and ever-changing part of the area’s history. In 2005, Rev trained and worked with budding farmer Angela Moran, focusing on soil building and returning the farm to its fully functioning state. Angela Moran has since dedicated endless energy and efforts to transition the space into a productive and highly sustainable farm in our city.

Graduating in 2002 in Environmental Policy and Sociology, Moran had set out with the academic goals to be involved in policy making—with a focus on international food systems. Pained by the reality that we are now well into two generations of people who are either unable, or unwilling, to grow their own food, Moran decided to take a few years to travel and work on organic farms, known as WOOF, across Latin America and the United Kingdom. Although these were short “snapshots” of the influence farms can have on local systems, her experience WOOFing led her to realize that writing policy was no longer enough. Instead, she decided that being intimately involved with real farming was the best way to make a direct contribution—and one that she felt good about doing each and every day. An eight month, intensive ecological farming program at Linnaea Farm on Cortes Island taught her permaculture, perennial farming, and what a life dedicated to working within food systems could be.

Moran’s passion for farming and growing food simply accelerated after her experience at Linnaea Farm. However, as a dancer and someone who loves the culture, art, and vibrancy of the city, uprooting her life and moving to a remote property was not a sacrifice she was willing to make. The opportunity to take over Mason Street Farm was the perfect fit—she was able to be part of a local movement where she could put her knowledge and new skills to use while still enjoying the pulse that only a city can offer. Fast forward eight years, and with the help of one of her closest friends, Jesse Brown (a very successful landscaper), the farm now produces 50-75 pounds of greens and vegetables to local establishments, including Solstice, Bliss and Mother Nature Market amongst others. As both shared big ideas for the farm, such as an Urban Farm School and Aquaponic system, they raised $12,500 through Indiegogo (an online crowd fundraising system) to put into reality their ideas for the farm’s expansion. They’ve established an internship program that drew a great deal of interest and forty applicants. With half of the funds, they began to lay the groundwork for a greenhouse on the property which will be one of the largest aquaponic systems in Victoria. 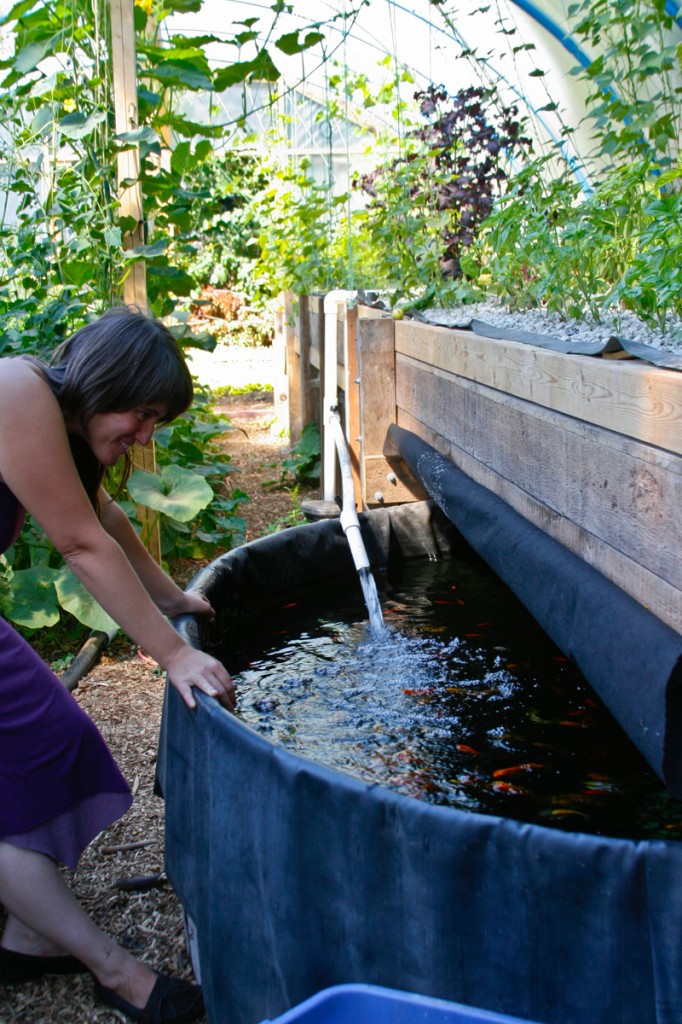 Angela Moran and the Aquaponic System

An aquaponic system is one that erases the need for fertile soil and in turn decreases labour and depends solely on the symbiotic relationship between fish and plants. In the greenhouse they were able to build from online fundraising, they currently have one large tank with Koi and Comet fish, chosen because of their tolerance for fluctuating pH and water temperature. The fishes’ waste (better viewed as nutrient rich water) is pumped through the system and delivered to a gravel bed that houses the plants where the water is then taken up. Due to the biology of the porous gravel and plant root systems, the water is cleaned to near drinkable levels, oxygenated, and then returned to the fish tank through the “flood/drain” bell-siphon system and the process is systematically repeated. As the fish get larger, and produce more waste, the productivity of the entire system increases and in turn, plant yields grow. With over three hundred hours put in so far to build the greenhouse and aquaponic system, Moran and Brown have relied on interns, volunteers, and patience and should have it entirely completed (with another fish tank installed) by the beginning of December.

This fall, as a response to growing public interest, they will be having an open house on September 29th where people can come visit this tucked-away urban farm and learn more about what it does. It will also an opportunity to purchase tickets for their Island Chefs Collaborative sponsored fundraiser, Boots and Suits, a “farm formal” where guests can expect to be wined and dined and dance all night in their very best. Although the farm is currently profitable, the internship program and educational aquaponic system require more funds, and this event will be a delectable way to support the farm. Tickets for the ICC event to be held at the Oddfellows Hall on November 9th are $85 which includes a five course meal prepared by chefs Peter Zambri (Zambris), Jamie Cummings (Relish), and Jon Pulker (Refiner Diner), with local drink pairings, entertainment, and dancing.