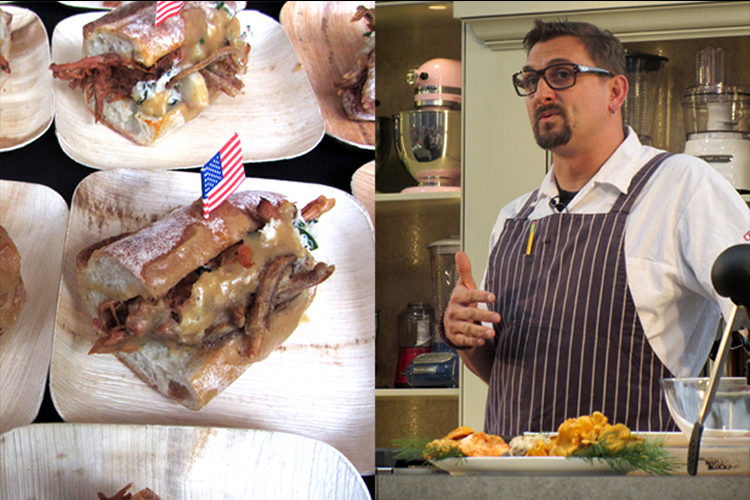 Tickets Go On Sale Monday, May 20 For Portland, Ore. Based Festival;

PORTLAND, ORE. – May 20, 2013 – Like the chefs, artisans, farmers, winemakers, brewers, and distillers who will appear at Bon Appétit Presents: Feast Portland: A Celebration of Oregon Bounty, the flagship food and drink festival of the Pacific Northwest has sown, watered, loved and nurtured a second epic year of events, September 19-22, 2013. Break out the handiwipes as tickets go on sale Monday, May 20 at www.feastportland.com with a schedule of more than 40 events around Portland, Oregon.

Attendees will once again Feast to fight childhood hunger, with net proceeds from the festival donated to Partners for a Hunger-Free Oregon and Share Our Strength. In keeping with its founding philosophy of facilitating collaborations between local chefs and some of the world’s most renowned names as well as fresh faces, Feast Portland 2013 promises a lineup as unique to food and drink festivals as Portland itself — from large-scale tasting events like the The Widmer Brothers Brewing Sandwich Invitational, Oregon Bounty Grand Tasting presented by Alaska Airlines, The USA Pears Night Market presented by Snake River Farms, and High Comfort at The Nines, to intimate sit-down dinners, hands on classes, live culinary demonstrations, thought-provoking speakers, and industry get togethers.

“Feast Portland takes place in the ingredient epicenter of the world – Oregon,” said Todd Davidson, CEO of Travel Oregon. “We invite visitors to come before and stay after the festival to see where the fresh, artisanal food comes from in Oregon, making it the premier culinary destination that it is.”

A complete listing of events and participants can be found on the Feast Portland website. Highlights include:

Location: Ecotrust Building | Date: Friday, September 20, 2013 | Time: 6:00pm-9:00pm | Price: $125 Join locally and nationally renowned chefs as they transform Portland’s historic Ecotrust building into the nation’s liveliest outdoor celebration of global street food. Called the nation’s best event of its kind by Food Republic, the Feast Portland Night Market is imbued with the spirit of the great bazaars of Southeast Asia and the Latin world. Enjoy a who’s who of craft beer, wine, and spirits to fuel an experience that embodies the sights, sounds, and smiles of a world culinary journey.

Location: Director Park | Date: Saturday, September 21, 2013 | Time: 11am-2pm |  After months of regional competitions at Whole Foods Market stores across the country, 12 butchers and fishmonger finalists are sharpening their knives to go head-to-tail for the glory of being named best in their craft. Come watch the sparks fly as the butcher and fishmonger finalists battle their way to the top. Finalists will be judged by an expert panel that includes top chefs and media on presentation, craftsmanship and swagger in dazzling demos of knife work. Sample some surf-and-turf from Whole Foods Market’s meat and seafood partners, pause for live music, snap a picture in the photo booth, and even learn a thing or two about high-quality meat and sustainable seafood.

High Comfort At The Nines

Location: The Nines Hotel | Date: Saturday, September 21, 2013 | Time: 6:00pm-9:00pm | Price: $175 What happens when comfort food gets pushed out of its comfort zone? What would grandmother’s food taste like if grandma had a Michelin star, an immersion circulator, and a pantry full of Iberian ham, foie gras, and candy bars? The answer: High Comfort, the most decadent culinary event around. Last year’s event saw meat cereal, caviar sandwiches, and a charcuterie hall of fame without rival. This year, some of the best chefs from the US and Canada are taking it to the next level. Get ready to be fed silly, sip Oregon wines and Champagne. Don’t plan anything early the next day.

Location: Throughout Downtown Portland | Date: Friday, September 20, 2013 – Sunday, September 22, 2013 | Price: $45-125 For those who want to bring home more than just a wristband from the festival, the Hands On Classes offer a unique setting to learn the tricks of the trade from the experts themselves. The Tasting Panels explore how Portland is at the forefront of a myriad of culinary industries, from cocktail infusions and nostalgic chocolate desserts to the return of the ever-popular competition, Wine vs. Beer.

selections from premiere Oregon wineries and other local libations.

Location: Various Portland Restaurants | Date: Sunday, September 22, 2013 | Time: 10am | Price: $75 A new addition to the Feast Portland line-up, the Brunch Series will combine the culinary talents of a visiting chef and a Portland chef. Each duo will create a collaborative menu for Portland’s most beloved meal, Sunday brunch.

In addition, Feasters are invited to experience Oregon’s bounty of ingredients and artisanal products where they are grown, harvested or crafted throughout the state. Local chefs, artisans and ranchers have shared their favorite places to dig into the state’s epicurean delights in “Trails to Feast.” Those interested can plan their trail at TravelOregon.com.

Founded in 2012 by Mike Thelin and Carrie Welch, Feast Portland showcases local culinary talent and Pacific Northwest ingredients alongside internationally recognized chefs, culinary professionals and industry leaders. Feast Portland is also a festival with a mission, donating its net proceeds towards ending childhood hunger in Oregon and around the country through Partners for a Hunger-Free Oregon and Share our Strength. For more information visit www.feastportland.com and follow the festival on Facebook and Twitter (@FeastPDX).

British Columbia’s popular, multigenerational cooking contest is back and better than ever in celebration of its tenth anniversary this spring. The ...
Read More