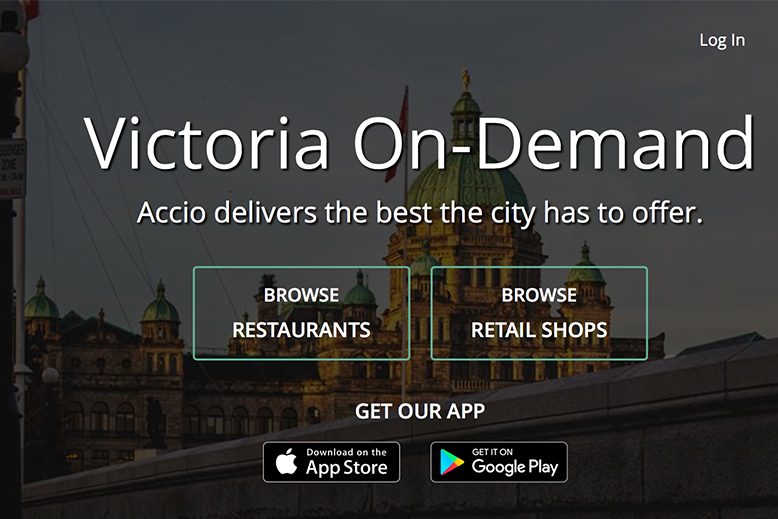 Mike Rowe of Accio, an on-demand restaurant and retail delivery service based in Victoria, BC, will be a featured speaker at the June 12th EAT Talks event “Let’s Not Open a Restaurant” at Northern Quarter on Douglas Street. Hear Mike talk about how he got his business started and how it’s doing.

Accio is a premium on-demand delivery service that was built over two days in Victoria in March 2015 by Mike Rowe and Carla Smart. Originally built as a service that would “bring you anything you want from anywhere you want” with a simple text message we have since grown to a full ecommerce experience with native mobile apps, GPS delivery tracking, and an incredible team of dispatchers, drivers, programmers, and business personnel. Most of Accio’s deliveries are from the best restaurants in the city including, but not limited to, Foo, Roast, Cactus Club, Be Love, and Pizzeria Prima Strada. Accio is now fulfilling hundreds of orders a week and growing.

Mike Rowe is the CEO and co-founder of Accio. Mike launched his first company web design company at the age of 15 and has been a serial entrepreneur ever since then. After a small disagreement with Microsoft over the name of his web design business “MikeRoweSoft Design” he decided to try something different and became a professional poker player for five years. When the passion for poker left he got back into internet based businesses with a couple of unsuccessful startups before coming up with the idea for Accio. In his spare time he enjoys playing hockey and softball, gaming, and spending time with his fiancee Carla and two dogs, Scout and Duke.

The article on L’Apéro in the May|June issue should have stated Chef Andrea Maiolo staged at The Courtney Room and Zambri’s and that he held the ...
Read More
May|June issue on the stands. Read ...
Read More
Nothing showcases a French-Canadian celebration like the traditional rich meat pie called tourtière. Recipes vary from region to region throughout ...
Read More