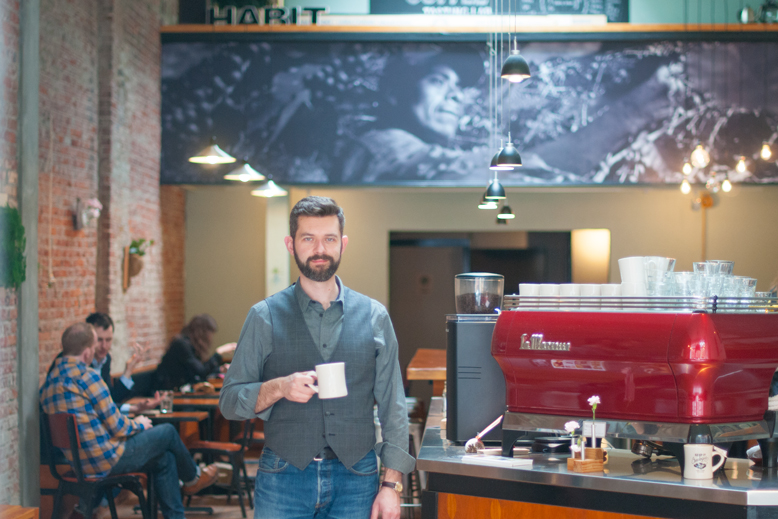 This is the first in a series of articles. We will be introducing each of the new writers that have come on board with our new website.

John has come on board as our coffee/tea/non-alcohol drinks writer.  John has a great love for coffee and tea and it shows when speaking with him. Recently, I spent an afternoon with John as we walked around Chinatown in Victoria. We had a coffee and a baked good at Habit Coffee on Pandora, then strolled over to Silk Road Tea to try out some of their amazing teas.

In-between sips, sniffs and samples we got around to chatting about his history and life. Before meeting him he was referred to as “Revolver John” at the EAT offices because of the first article he wrote for EAT on Revolver Coffee in Vancouver, after meeting him though, I don’t think his knick-name will go away because it is too cool. Below is what we chatted about!

John, you have a background in music, specifically the saxophone. How did that lead you into a career in aeronautics and then into a love of coffee and tea?

The short answer: it didn’t.

My three obsessions in high school were music, aviation and comedy, with music winning out for the career choice. After music school I worked as a freelance musician and writer, but had a hard time paying the bills (I learned the art of the hustle much later). I thought a trade would be a better way to put food on the table, so I decided to give flight school a shot. After I got my commercial license I went to fly in the bush, and I tell ya, nothing reinvigorates your palate more than being in meat ‘n potatoes country.

I come from a foodie family. My grandfather was the executive chef at Government House in Victoria after he left the army. Later he helped start the culinary school at Malaspina College (now VIU). Food is a constant discussion in the family.

I got into tea at about the same time in high school as espresso while working at Starbucks. Discovering the Italian joints on Commercial Drive only deepened that love affair, though my mornings always started with tea (a loose orange pekoe in a tea ball).

I got into drip coffee once I started working in aviation. Double doubles are omnipresent. Then when I started writing about coffee for my aviation-and-fun-things-in-Vancouver blog (on-the-step.com) I REALLY got into it. Coffee has between 700 and 1500 aroma compounds (compared to 300-600 in wine). What’s not to love?

Tell us about what you love most in each category, coffee and tea.

I used to have a rule: go to someone’s house for tea and out for coffee. That’s changed now, but there’s always a social side that grips me about food. 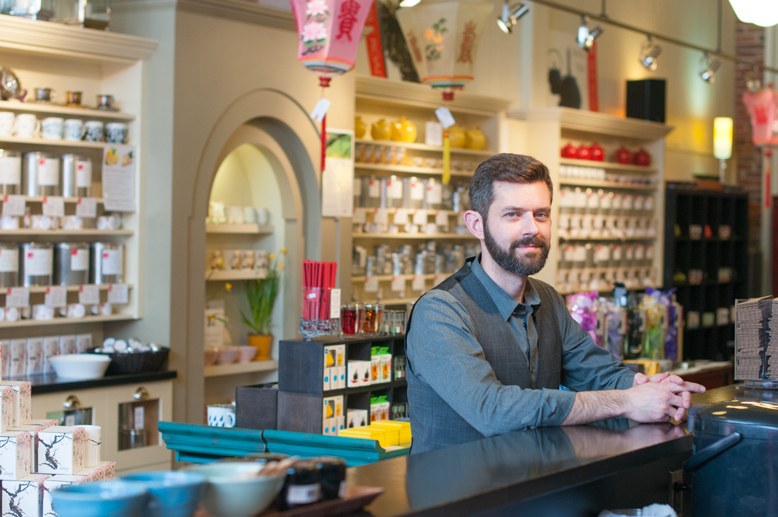 Have you played any interesting saxophone gigs?

I used to play in large Latin music ensembles on weekends. I love playing in brass sections and it was fun to be part of a 15-person army. The music – salsa, merengue and cumbia – was groovy and demanding. Dance audiences are fantastic because they give you instant feedback: they either stay on the dance floor or they leave.

Everything I love about playing live is encapsulated in the Railway Club on the first Monday of every month, when I sit in with the Hard Rock Miners’ Sing Along. There are 100 songs we all know in the book (Johnny Cash, Elvis, the Ramones, The Pogues, etc). The audience calls out page numbers, we play and the whole room sings. It’s a real arm-around-your-neighbor-and-raise-a-glass kinda thing. The band is super tight and the crowd is, well, beautifully chaotic.

My favourite gig, hands down, was playing the music from Fellini’s “8 & 1/2” as part of a performance class at SFU. We teamed up with the directing class from the theatre department and about 40 of us went to 5 or 6 locations on campus (even in the lobby of the library). We played the circus-y theme music and the actors would interact with people as Fellini characters. It was glorious.

What kind of music do you like. Some people that play such traditional instruments love really eclectic music. One of my friends has 14 years piano, but loves ska above all.

I grew up a metalhead but studied classical theory, history and composition. And I’ve played saxophone in big bands, small jazz ensembles and Latin groups. I’m a musical slut, no two ways about it. One of my composition teachers told me, “it doesn’t matter what you write, as long as you say something.” There are interesting people in every genre. We just have to stay open and find them.

If you get stranded somewhere, what coffee maker would you want and why? Even if it is in the middle of nowhere, pretend you have a power outlet.

I’d want an espro press. It’s a French press with 2 – count ’em *TWO!* micro filters. You get the body of a French press coffee with the cleanliness of a paper filter. Not bad for local boys who had an idea and a good Kickstarter campaign.

As for the coffee itself, that’s easy: Ethiopian Yergacheffe or Sumatra. I just love the flavours. 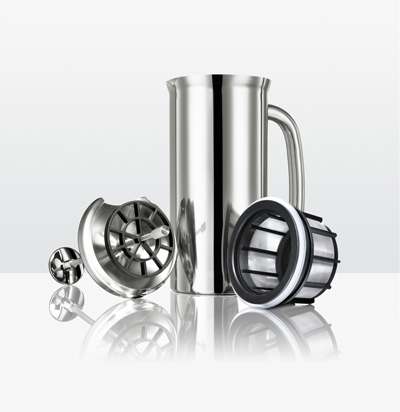 Are you a green tea person or a black tea person (this question was asked as we discovered Silk Road’s “green tea earl grey”)?

I’m both, depending on my mood. If I’m at a cafe, I usually get black tea, because few places know to steep green tea at a lower temperature to avoid bitterness. I love a good oolong or matcha as well as an Earl Grey.

That green tea earl grey had everything. Like their Japanese Sour Cherry and Beautiful Heart. Hey, Silk Road…you know who loves you *wink*. 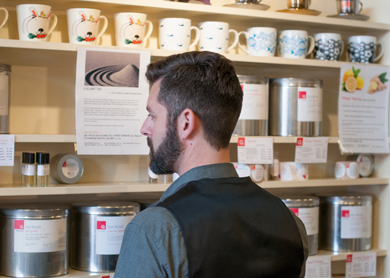 Obviously being the non-alc writer this question is opposite to what you  write about. Do you have any  favourite alcoholic drinks?

No booze for me. But I would be a whiskey and a cigar kinda guy if I did. It’s a gentleman’s combination.

I’ve told you that we refer to you as “Revolver John” at the office, have you ever had any other super cool nicknames?

“John” leads itself to a million nicknames. I was “Juanito” when I played Latin music and “Cool Hair Johnny” to a circle of friends when I had a non-Elvis related pompadour. I’m “Johnny Saxophone” when I play with the Hard Rock Miners. Most people call me “John Crawford” as if it were one name, or “JC” (especially by folks who grew up Christian).

Any Closing comments for the readers?

I’m really excited about writing for EAT. Finally, I get to write for an audience that appreciates, no, LOVES food. No coaxing needed with this crowd to try something new and yummy.

Superflux Cabana has opened upstairs at 804 Broughton St (the former location of The Livet). Featuring lots of Superflux beer and a menu that ...
Read More
January|February issue is on the stands! Pick up a copy, or read the digital version. Read ...
Read More
Eating locally grown food allows consumers to be more connected to their food sources. And one of the best ways to ensure you are getting fresh, ...
Read More