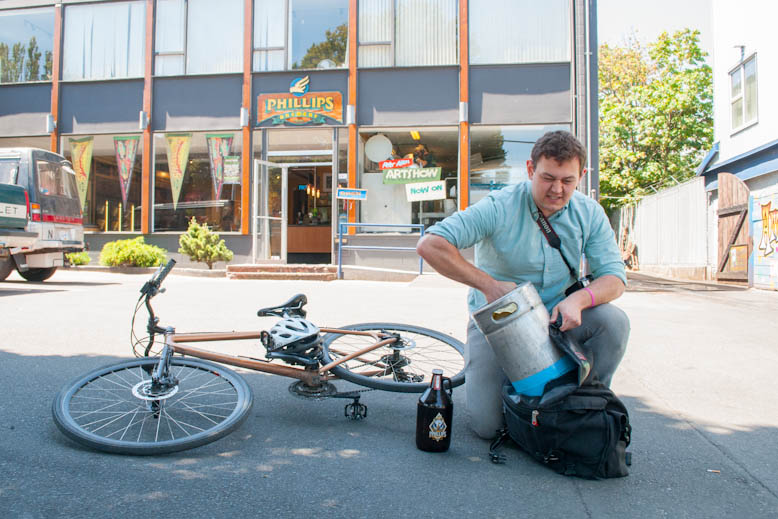 I recently sat down with Sol Kauffman — one of our EAT web contributors who also wrote some pieces for the September/October issue. He joined EAT following the launch of our new website in April. Sol has an incredibly well rounded skill set — he writes wonderfully and takes great photos, and has the uncanny ability to write about whatever we throw at him.

Sol has a knack for sniffing out relevant details and much more about anything he’s working on, even if he knows nothing about a topic to begin with. Considering that our two week deadline is a tight one, it’s impressive that Sol can, more or less, become a bit of an expert on anything he’s writing about in such a short (and busy) amount of time.

Read the interview* below

As interviewed and photographed* by Colin Hynes – Assistant Editor | EAT

*edited for clarity, length and context.

Colin: What can you tell us about your food background? EAT readers may have picked out some details from your many articles, your food history seems even more eclectic than what you’ve written.
Sol: Not sure if this part is interesting or just cliché, but I was always the kid who would eat everything; my friends parents and grandparents loved me because I enjoyed everything they made. My mom always made organic, local food with plenty of esoteric vegetables, so eating Hamburger Helper and Pop Tarts at other people’s houses was always exciting. I traded lunches a lot.

Anyway, my first job was dishwashing at the original Solly’s Bagelry in Vancouver, which was a pretty gross job; the sink was right over the leaky grease trap which stank, and part of my gig was cleaning old, sticky, rusty shelving and flooring in the deep freezers. I built a lot of character and ate a lot of cinnamon buns, and it was really cool for me to hang out on Main Street where all the cool people were; at around thirteen years old I was going to a private Jewish school and lived a fairly sheltered life, so it was fun hanging out with the proto-hipsters and almost getting my bike stolen on a regular basis.

Eventually I moved to working at my favourite Vancouver pizza chain, Flying Wedge, and that was much more fun; I ended up as the night shift supervisor, made and ate a lot of pizza. The staff were pretty interesting there as well, many of them Filipino, and the deliver driver was this guy named Mohammed who I think still works there; he was originally from Afghanistan, had several daughters and always gave me the worst romance advice.

After that I had one job slinging popcorn at the Park Theatre, but then I moved to UVic and started working at the Apple Store and other retail gigs etcetera during the summers. Last year I sort of rejoined the food service world by taking a job as a social media and marketing consultant and photographer at Glo Restaurant & Lounge as well as Med Grill, and I’m still doing that right now. I don’t cook or serve anything so I’m a total poseur, but I do hang out in the kitchen a fair amount shooting food and bothering the chefs, Ryan Hayter (Glo) and Andy Fawcett (Med Grill). Both restaurants have really great staff and management and it’s really a pleasure to work with them.

So I guess honestly my food background isn’t that interesting? I once won a hot dog eating competition in high school that raised money for Darfur, obviously using the Kobayashi method. I have the stomach of a junkyard dog and will pretty much try anything, though I feel like I’m really setting myself up for some scary assignments by saying that. 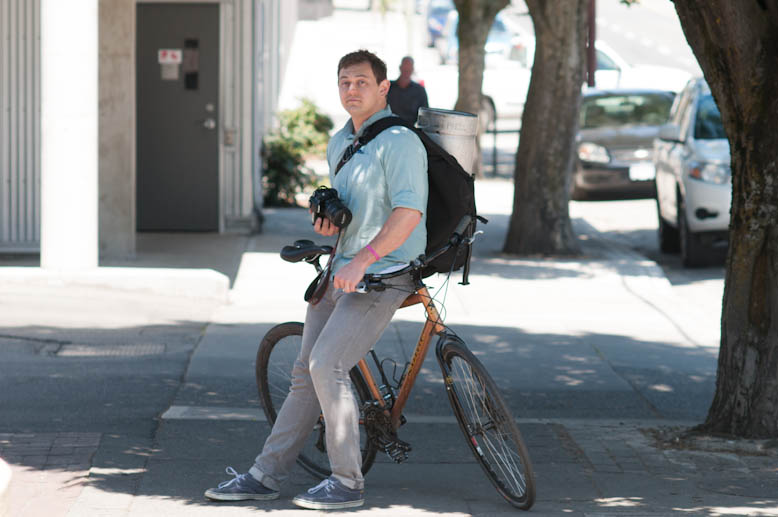 C: In your Halifax Donair article you describe a music tour you did across Canada with your band. What instruments do you play? Music styles? Do you ever get influenced by music to make some food or vice versa (I know I have, but maybe I am just strange that way)? Also can we come see you play?!

S: I’ve played drums since I was 13 or so, and have played bass for the last couple years. I was in a metal band called Auroch for about six years and did a cross-Canada tour with them before moving to Victoria and joining a series of indie rock bands. They’re doing very well right now, having just dropped a new album, Taman Shud, and are going on tour in Europe in September. Since then I’ve played in erstwhile Victoria semi-supergroup Forestry, then Woodsmen, and now a new trio we’re calling Katabat, which sounds sort of like Pavement, Dinosaur Jr., that sort of stuff. We played our first show at the Copper Owl a few months back, but our guitarist Rob Walsh (of Hawk & Steel) and Winston Wolfe is going on tour with Sam Weber for a month so we’ll be hunkering down and preparing for some recording this fall — no shows for a bit.

I often tend to cook while watching TV (these days it’s Hannibal on Netflix or watching TrumpSC play Hearthstone on Twitch.tv) rather than listen to music, but I do connect certain artists or records with types of food. I’m really into Buena Vista Social Club and Cesaria Evora right now, and it’s summertime so I’ve been doing more fresh, Latin or Mediterranean style food recently. I have this Greek salad recipe I really like, and I make burritos at least every couple weeks. Hey, I never claimed to be a real cook.

C: What other hobbies do you enjoy?

S: Besides music I enjoy cycling, though I’ve never been as into it as you have! I’ve ridden in one cyclocross race (on a flat-bar hybrid with road tires), and I own spandex kit, but it’s only in the past year or so that I’ve been doing longer distance riding. I’ve also been doing the Stronglifts 5×5 weightlifting program for the last few months and that’s been really fun and healthy for me, though it keeps making me heavier and slower on the bike.

That all makes me sound like a gym rat … The truth is I’ve been a pretty classic nerd my whole life, and only got into working out fairly recently. I used to play Warhammer 40k when I was a kid and always loved Starcraft, Diablo, etc. My parents wouldn’t let me play console games at home for a long time so I was a computer kid. I don’t play much anymore outside of Rocksmith and the single-player AAA titles like Mass Effect, Max Payne, etc.

My girlfriend is going to die of shame as I say this, but I met almost all my friends in Victoria through playing Magic: The Gathering at Yellowjacket Comics on Johnson Street. I’ve competed in a few Grand Prixs and Pro Tour Qualifiers, but I play much less now than I used to thanks to work and the existence of Hearthstone. My friends Pat and Nelson and I are planning to play a team Grand Prix in Portland in August and that’ll be a pretty exciting event Magic-wise. Also as a writer I should say I love reading, particularly the umuch-maligned contemporary American fiction genre, and lots of non-fiction as well, particularly food, politics and economics. I do most of my reading on my iPhone these days, whether it’s Slate, The Atlantic, Vice, The Hairpin, that kind of stuff. 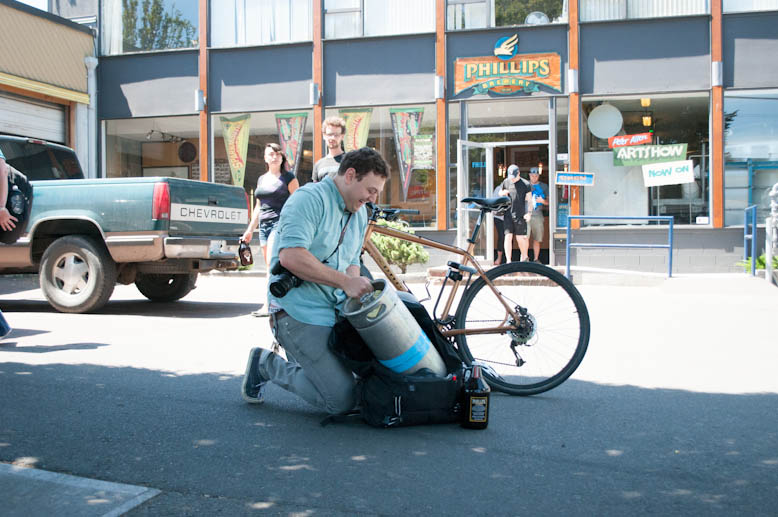 In this photo I was yelling at Sol to stuff the keg in his bag before anyone notices that it was gone. Obviously the bag was a bit small. — Colin 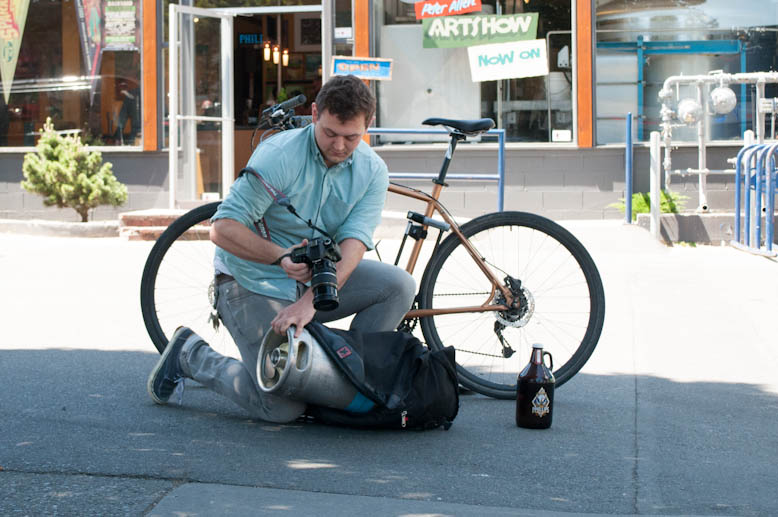 C: Coming back to food and drink, what are your drinks of choice? Would you take a craft beer over an artisan cocktail? Would you rather a peaty whiskey to swill? No alcohol at all? We all saw in your Sol’s Secrets article that you like to go to Cenote lounge, so what’s your go-to when down under the sidewalk?

S: I don’t drink coffee very often, which seems to weird everybody out. I’m definitely a craft beer fan though I feel a little alienated by the Northwest obsession with hops. I live in the middle between boring import lagers and insanely punchy IPAs. Saisons and especially weizens are definitely my favorites so I drink most of my beer in the summertime; I love this new trend of people putting out grapefruit radlers, and the more banana esters there are in my Hefeweizen the better. I can’t really pick favorites as I’m addicted to variety, and if I had my way every six-pack would be a grab bag of singles. In fall I like spiced winter and pumpkin ales. Cenote usually has a Phillips seasonal on tap and I usually just have that, whether it’s Funk Dunkel or Electric Unicorn or whatever, though they do make awesome cocktails as well. I’m pretty plebeian when it comes to those; my current jam is Black Russians, and Whiskey Sours are my fallback.

C: What was the last thing that you ate (not on assignment for EAT) that delighted your taste buds? What made it special? Was it a particular craving or just knock-your-socks-off exceptional?

S: A few weekends ago I had tacos from the Feastro purple food truck at the Trout Lake Farmer’s Market in Vancouver, and they were just insane. I was shocked that something so complex could come out of a food truck, I mean, it wasn’t cheap, but you could tell why. I also had an incredible pork torta at Hector’s Casa in Kelowna recently. That said, last month I ate day-old movie popcorn and peanut butter M&Ms with a can of Coke for breakfast and it was probably one of my favourite meals ever, so go figure.

July|August issue on the stands. Read ...
Read More
Before the opening of Saint Franks, social media let out a collective groan when the new bar was rumoured to be a gourmet hot dog/bourbon joint where ...
Read More