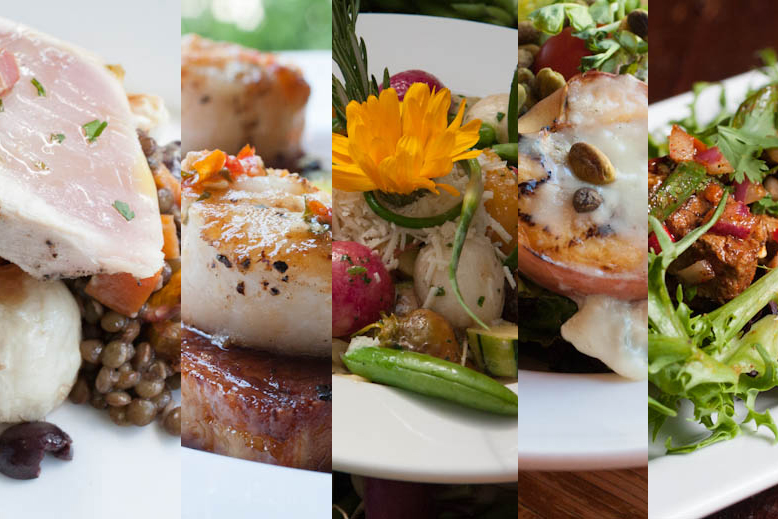 Summer cuisine can be a challenge. Food should make us feel full and restored without leaving us bloated, and the amount of liquids (particularly beer, if you have any sense) we pack away doesn’t help. The rich sauces and heavy meals of wintertime give way to fresher and lighter dishes, though of course we make exceptions for barbeque and grilling.

I don’t know about you, but my apartment is often too hot to even consider lighting a burner, and I’ve yet to join a tax bracket where high-rise patios are the norm. In the interest of eating out summer style, I asked some of EAT’s favourite Victoria restaurants to recommend something from their menus, whether they are available seasonally or year-round. 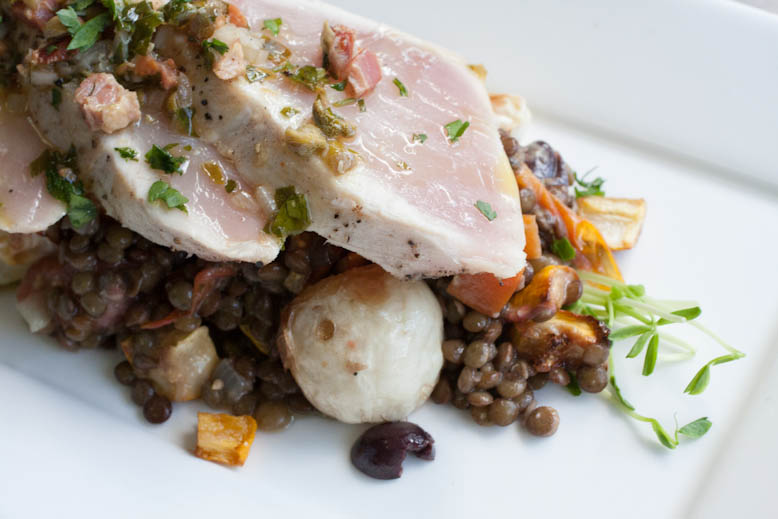 Chef Peterson’s seared tuna slices were laid on a bed of lentils and summer veg, then drizzled with his own bacon vinaigrette, featuring Glenwood Meats pork, shallots, chopped capers, white wine vinegar, oil and parsley. “Adds a nice bit of smokiness to the whole thing.” The tuna was smooth velvet, and the small turnips burst with horseradish-y flavour. 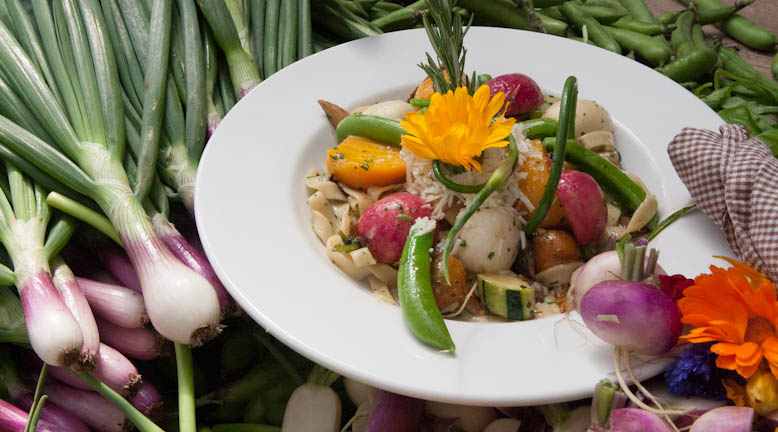 “It’s one of our largest selling vegetarian options, and pretty much everything is from the farm,” said Dwane MacIsaac, setting up an elaborate cornucopia for the photo. “I inherited it from the previous chef, and we just built on it. It focuses what we’re growing on our farm here in Victoria, and it changes with the season, so it’ll go from having this spring and summer root veg, to going to beets, turnips and a lot of those storage vegetables for the winter months.” The pasta is made with eggs from the farm (“we get about 50 dozen eggs a week,”) and the sauce is a brown butter cream with white wine and a hint of citrus. 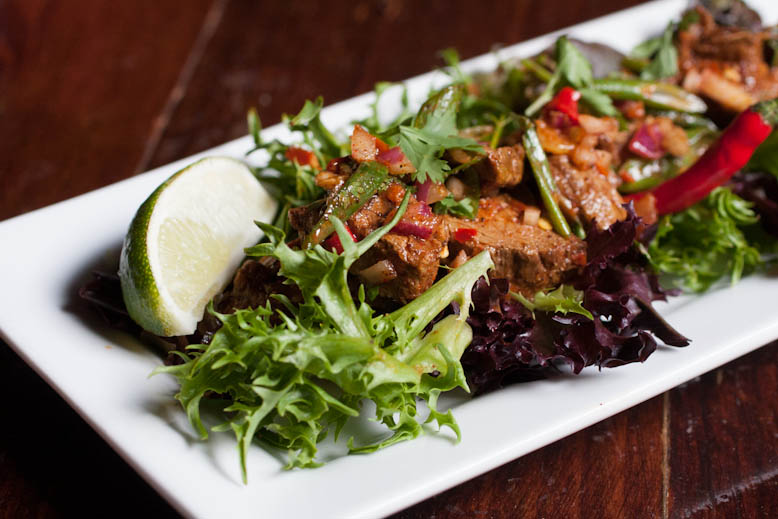 “It’s beef tenderloin, you grill it on it’s own and then it marinated in a combination of curry spices, lime juice, ginger garlic and other spices,” said long-time Mint cook Brendan Pye. “The last thing you do is this Nepalese thing called tempering, where you fry a spice in oil. Then we let it sit for a day and when it’s ordered we toss it again in red onion, cilantro and lime juice. We’re the only place you can really get choyela in Victoria, it’s a really authentic Kathmandu dish.”

“I was talking to [part-owner] Rajen Shakya’s wife, and she was saying it’s a traditional dish that’s expected to be served at a ceremony, not a wedding but like a birthday or a dinner,” added cook Garnett Edge. “They’ll have it as an appetizer, usually with an aperitif, maybe a beer, nice cold glass of wine. It’s a hugely popular dish here—I probably make it for staff more than anyone else. All the chefs are eating it all the time after a shift.” 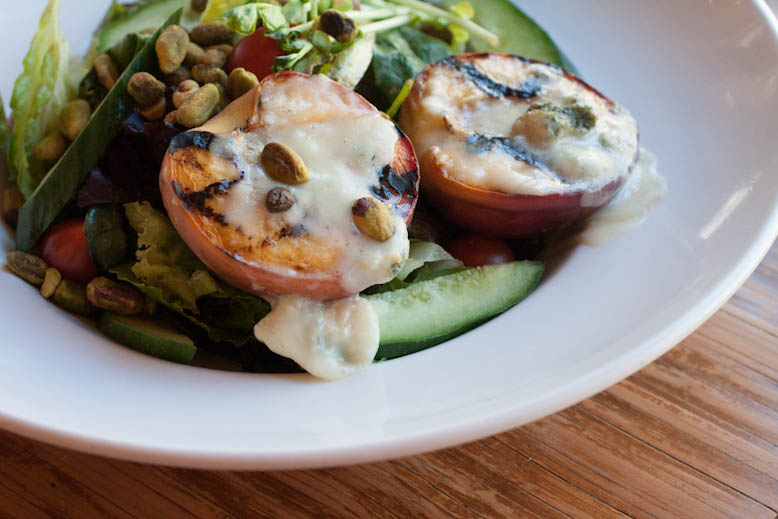 “James Wolfe the head chef came up with this one a couple weeks ago,” said Fernwood Inn manager Olivia Anglin. “We thought just because the weather was getting better to incorporate some local fruit into our dishes, and we complemented the sweet peach with some gorgonzola cheese and fresh greens. The Harissa vinaigrette is a chili sauce with some cumin and cardamom.”

The sweet and spicy flavours make for a nice contrast, smoothed out by the creamy gorgonzola that melts in the cores of the grill-marked peaches. Olivia recommended pairing the dish with some of the de Vine Vineyards whites that the Inn will be offering in the coming weeks. 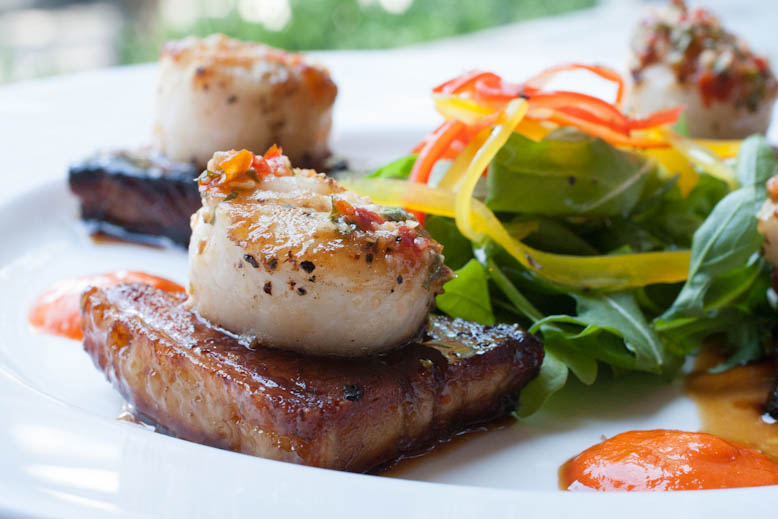 “I liked the idea of lots of garlic and crushed chilis and basil, and all that sort of stuff with the seared scallop it just really worked,” said chef Tod Bosence. “The idea of the pork and scallops came from the Joe Beef cookbook from Montreal, and when we tried the chili and basil oil it was so good that we put it on top of the halibut too, haha. Actually we put it on everything, not on the menu but when we’re eating for ourselves.”

“To me that dish really works because it’s a really well-balanced dish at two opposite ends,” added head bartender Simon Ogden. “Like it’s heat and cool, it’s rich pork belly and the light sort of oceany scallops, and the heat of the chili and the cool of the basil, it’s a real all ends of the spectrum.”

This past week I checked out the Mobile Food Rodeo in the bustling neighborhood of Fremont in Seattle, Washington. Now in its third year, the Mobile ...
Read More