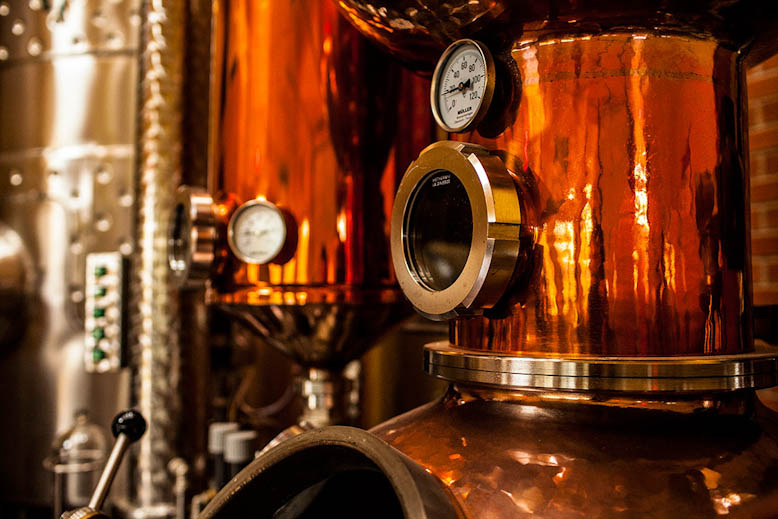 Tucked amongst the rolling hills of the Cowichan Valley countryside is Merridale, the oldest craft cidery in BC.  Producing ciders, spirits, and fortifieds using fresh picked apples from their organic orchard, it has been unique since its beginnings.  Indeed the history and experience at merridale is long.  Twenty-five years to be exact.  Traditional craft methods have been maintained, they stay close to their roots, but it is also clear this business is constantly evolving.  This year, the silver anniversary year, the little ciderhouse is embracing change like never before – A new design on all of their labels, new spirits, new ciders, and even new activities and services on the farm where the apples are grown. 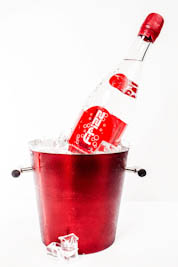 First, a little about the roots – What makes their ciders unique and taste different than some of the new ciders on the block?  Mostly it is the type of cider apples they use.  True cider apples.  Not the typical eating varieties such as the Macintosh or Gala.  Their apples are grown in their own orchards and are primarily from France and England.  The bittersweet and bitter-sharp varieties which are rich in tannins and acids are known by unfamiliar names such as Michelin, Yarlington Mill, and Dabinet. These apples give Merridale cider its characteristic body and flavour. Cider lovers certainly understand these differences, as Merridale recently won seven awards including Cidery of the Year at North America’s largest cider competition in Portland, Oregon. 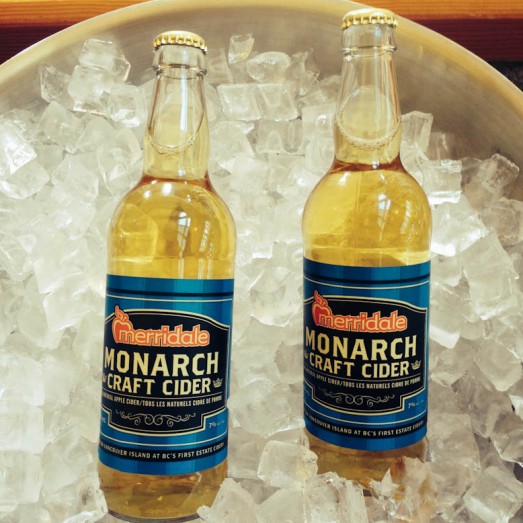 Monarch, their new pasteurized cider in a glass bottle, embraces the essence of what’s going on at merridale.  Monarch is a celebratory cider, created to commemorate the last 25 years of business, but also to recognize the change customers have been asking for.  First, you will notice a new look on the bottle.  It is unique and uncomplicated – like the people who drink it.   It exemplifies “craft,” much like the cider itself.  Very soon, you will see this new look extend to the bottles on all merridale ciders, from Traditional and House, to Scrumpy and Cyser.   Second and most noticeable is the glass bottle.  Janet and Rick have steered clear of pasteurizing their cider in the past because they were unable to find a method which they felt protected the freshness of the cider.  After many years of fooling with different methods, they found one that works.  Surprise, like most other things craft, slower is better.  While many ciders are pasteurized in minutes or even seconds at high heat, merridale is pasteurizing the Monarch slowly taking closer to half an hour per bottle.  “It works” says Janet.  “Monarch is fresh and balanced with bubbles that seem to grow from within.  It is perfect with food or on its’ own.”  The 500 ml bottle is perfect for sharing or enjoying on your own.

There is also the evolution of fermentation to distillation at the merridale distillery.  Well, it is sort of recent or shall we say “new”. The merridale team has actually been distilling for over 7 years now, but most of the spirits went into barrels for aging, rather than store shelves for selling.  To launch this venture, head distiller and owner Rick Pipes, hired Master Blender Laurent Lafuente.  Together the dynamic duo have used 100% B.C. grown raw materials in their fermentation, and then distilled in small batches in a pot still. This practice allowed merridale to obtain the first craft distillery license in the BC last year.  After achieving this, they took some of their aged nectar to the American Distilling Competition with over 100 other products to see how their spirits measured against them.  Very well.  The Stair’s Pear Brandy won Gold and Best in Show, while the Cowichan Cidery Brandy won silver. Now with some of the oldest aged brandies in BC, some carbonated vodka (yes, vodka with a tickle) and some other interesting concoctions up their sleeve, they are ready to enter the cocktail world of craft spirits.

And then there is corporate headquarters itself (that’s the farm actually – nothing corporate here). 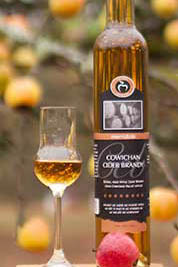 If you are able to get away it is well worth the scenic drive over the Malahat to check it out.  With its rustic yet refined atmosphere, everyone is welcome at Merridale—children, dogs, and even horses (yes, they do have a hitching post).   The newly created courtyard gives an air of relaxation and serenity.  Here, time can be suspended while you stop to smell the apples. If you are interested in learning more about the exploding cocktail culture, their interactive distillery tour coaches guests on “how to” taste craft spirits.  Learning the roots of the cocktail is entertaining and tasty.  Happy hour is also new to the orchard cookhouse bistro, and it runs Monday to Thursday from 3- 6.  Enjoy a tall cool one on the deck with a variety of small plates at very inexpensive prices.   What’s not new at merridale this year?  Sunday night pizza night and live entertainment with no coverage charge. Starting June 17th with Tropic Mayhem, pizza nights are back for the season.  They are sort of a fixture at merridale.  Some things should never change.

If you don’t have time to stop by and visit Merridale, you can ask for their products by name at your local liquor store, pub or restaurant. Follow them on Twitter or Facebook to stay informed about their weekly specials at the farm, or to find the festivals they will be serving their cider and spirits at this year.

Eat, Drink, and be merridale!

The article on L’Apéro in the May|June issue should have stated Chef Andrea Maiolo staged at The Courtney Room and Zambri’s and that he held the ...
Read More
May|June issue on the stands. Read ...
Read More
Vancouver B.C., March 18, 2014 - On Saturday, May 10, 2014, sixteen of the province's leading small-batch distilleries plus one from the Yukon, will ...
Read More