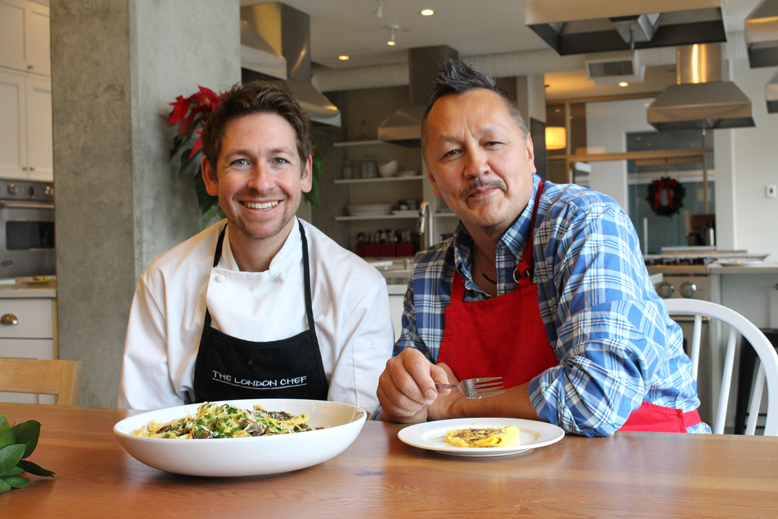 I’m going to be honest. A few months back, I pitched a story on the London Chef cooking school. The article had no direction, I really just needed an excuse to attend a cooking class and write about my experience. Simple, right? My editors came back with a revised idea. The owner of the London Chef, Dan Hayes (thelondonchef.com), had a new television series with Aboriginal hunter Art Napoleon (producer/writer/@artnapoleon) set to premiere. Could I write a profile about Moosemeat and Marmalade? (That’s the name of the show, I think it’s quite clever.)

Sure. Not a problem. It just meant there’d be no cooking school.

Lucky for me, Art and Dan offered to cook two meals representative of the series in the London Chef kitchens — venison ragu with homemade pasta, and lemon gremolata from Dan, and a bear-crackling omelet from Art.

At its foundation, Moosemeat & Marmalade is a 13 episode series following a classically trained chef and a hunter as they explore Canada’s backcountry and England’s fine dining establishments. It’s been an almost two year journey from initial idea to final product. 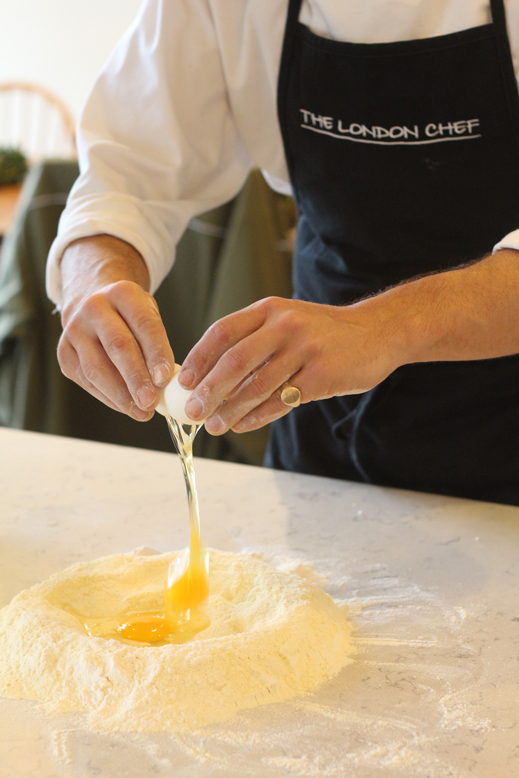 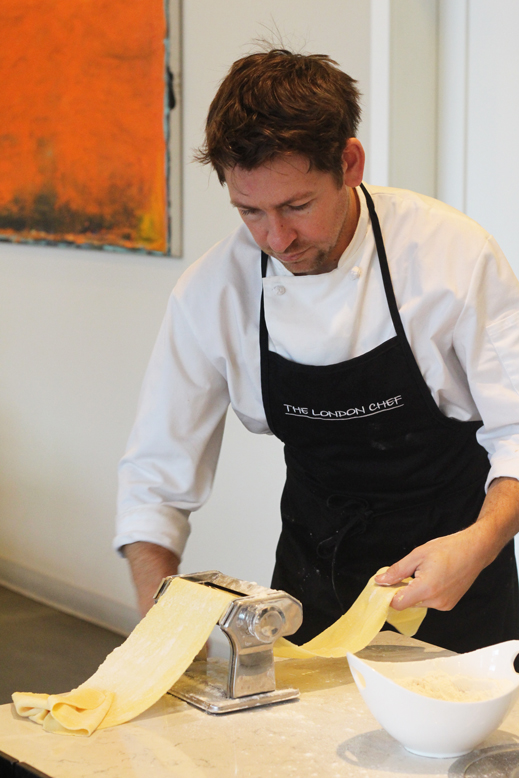 “We had a rough idea about a trap line chef. A comedy spoofing cooking shows, this guy was going to be opposite of how chefs behaved: he was a slob, cooking in a cabin,” says Art.

“So you’re referring to yourself?” laughs Dan.

That exchange is from the first minutes of our interview. The banter never stops and the comedy is only enhanced by their colliding personalities. Dan is slight, with a boyish grin and at one point, describes his cooking as jovial — which he can totally pull off with his British accent.

In comparison, Art’s height makes any kitchen look pintsized. A background in public speaking ensures that even when his attempt to flip an omelet bombs, Art brushes it off. He’s also pretty honest.

“I met Dan on another show I was working on. We thought, ‘He’s a nice looking guy and real chef, what if we put the two of us together?’ A lot of people are not going to tune in outside of APTN, but if we bring in a white guy then all the white people will watch.” 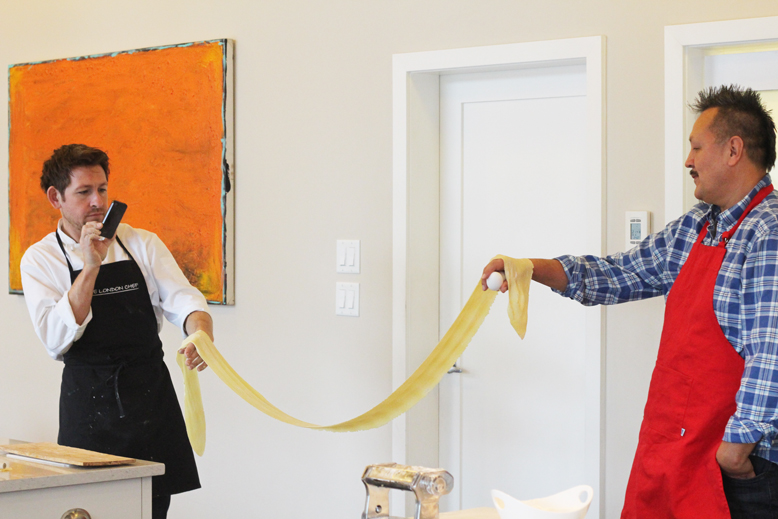 Each episode sees Art and Dan travel to a new location, from on the island to overseas. A foraging element is always at the forefront; either hunting, fishing or shopping (the shopping episodes are Dan’s domain). The remainder of the half hour episode is dedicated to cooking a meal that features an ingredient specific to the area. Guests include community Elders, butchers, and restaurant owners.

“We understand that the show is a cultural clash, so what you see on the show is not fully what we’re really like. We’re exaggerating slightly,” says Art.

When given free rein, both are adept in the kitchen. Art’s omelet included bear crackling and moose powder, two ingredients never found in grocery stores. I asked how I might procure moose powder (which added a salty and smoky note to the eggs).

Hunt a moose and dry the meat was Art’s answer. It’s a similar situation with the bear crackling. Not to be outdone, Dan’s ragu included saffron and parmesan rind. And of course he made his own pasta. 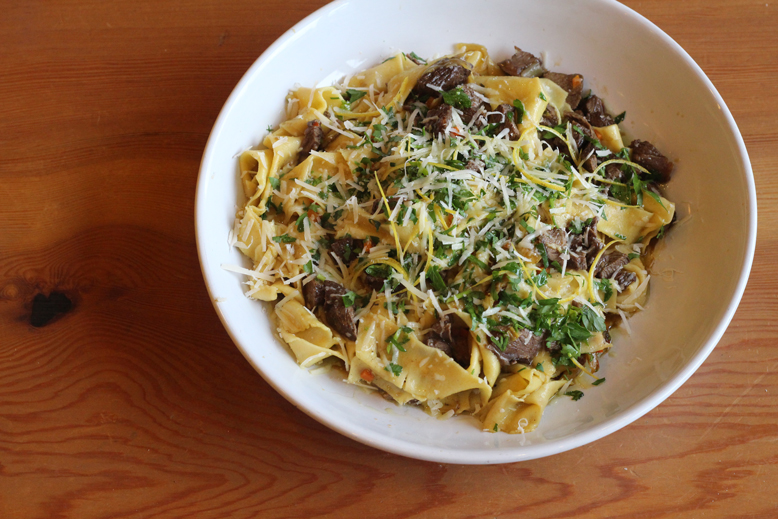 Despite their apparent confidence, both are quick to admit that filming the show presented challenges.

“We couldn’t travel with a gun, so I relied on relatives. We’d show up and they’d give us a gun that hasn’t been fired in 10 years. We’d test it and it shot so far off, very inaccurate. And we only had 5 bullets,” says Art.

“So, disadvantaged in that way. There’s an episode where we don’t get what we need and we later visit a butcher. That’s the reality of hunting,” says Dan.

And it was often the first time the crew had witnessed the death of an animal. “We shoot a moose and it falls into a raging river, you got to jump in and pull it out,” remembers Art.

They’re already at work on getting a second green-lit season, and know what to focus on: cooking over an open flame. “Our technique was black on one side and raw on the other,” says Dan.

One thing Art and Dan have perfected? The talent to cook and Instagram at the same time. I’m impressed.

Moosemeat & Marmalade premiers in Canada the first week of January on APTN at 7 p.m. (channel 121 on Shaw cable in Victoria) and has already aired in Quebec, France and the U.S.

With Phase 2 beginning, restaurants and patios, tasting rooms and coffee shops are reopening. This is an ongoing process, with many changes, so we ...
Read More
New Year’s almost here. Leave the Christmas excess behind, grab a bottle of BC wine and celebrate. Fizz. We all need more fizz in our lives – ...
Read More