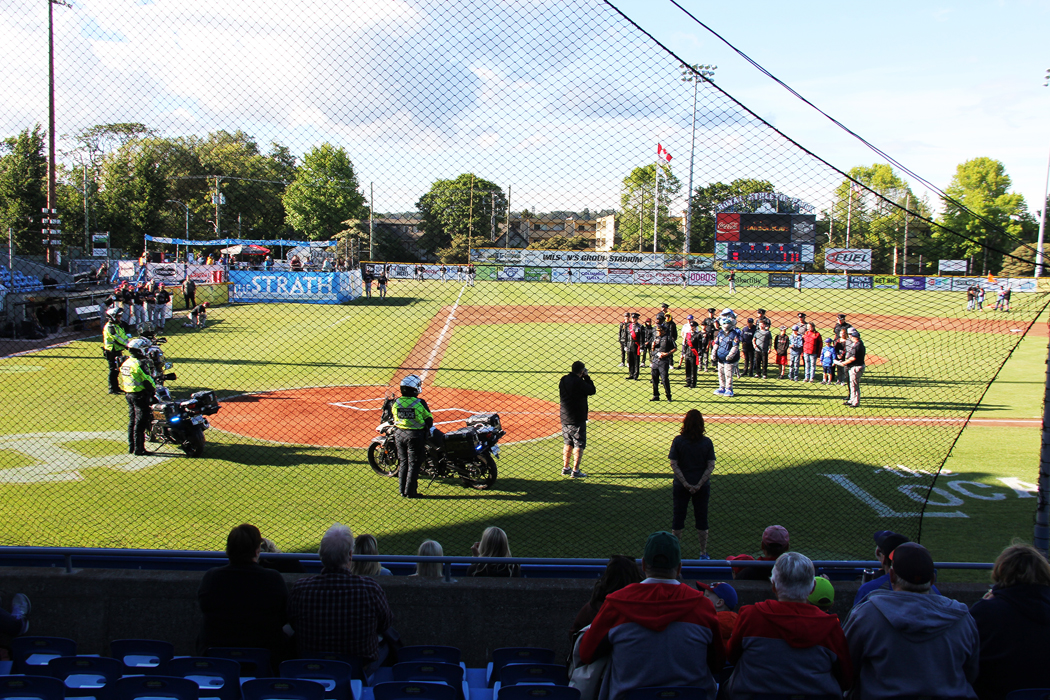 On June 7, the Victoria HarbourCats played their home opener game at Wilson’s Group Stadium at Royal Athletic Park against the two-time defending league champions, the Corvallis Knights. A small team of EAT reporters attended on the day to catch the excitement of the game, the thrill of the crowds, and the rush of a long-time team rivalry, and some ballpark food.

There’s a lot of energy packed into a day at the ballpark. The excitement is contagious, as the smell of hotdogs and the sounds of the organ melodies lay thick in the warm summer air. Before the first pitch is thrown and the sounds of the bats start to crack, crowds are shoulder-to-shoulder packing into the stadium and vying for the best seats and some good eats before the game. 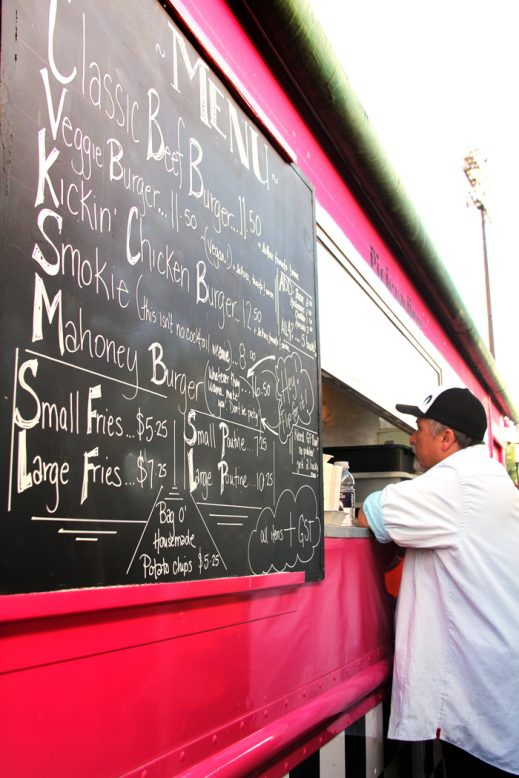 Classic choices like a good old-fashioned hot dog or warm buttery popcorn are still available from the City of Victoria’s concession stand, but options today go beyond that. Lining the back wall of the stadium is a row of food trucks and vendor choices. The row of trucks, all planted in semi-permanent locations, include Floyd’s Diner, Molly’s Fish and Chips, Phoebe’s Ice Cream, Greek on the Street, Country Crepes, Saltchuk Pies, Wilson’s Mini-donuts, and Boston Pizza.

Familiar favourites like Floyd’s, keeping on-brand with their pink exterior and classic comfort food choices, offer a selection of burgers, fries, and housemade potato chips. Towering above your typical sandwich options, they also have the Mahoney Burger; a monster of a meal in which the kitchen team surprises you with whatever they are in the mood to cook you. It’s not an option for the faint of heart or the picky eater. 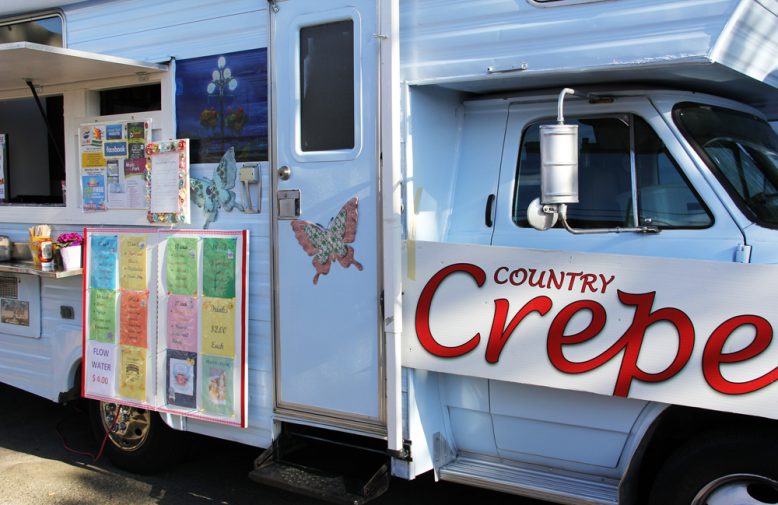 Molly’s Fish and Chips offer choices of classily British fried fish—complete with mushy peas—and fresh chips wrapped in a cone of newspaper. You can also level up to poutine. Greek on the Street dishes up some of the freshest on-the-go Greek food including souvlaki, salads, and gyros.

Country Crepes is another new addition to the park this year, offering savoury or sweet delicacies from an old French crêpe recipe. The chocolate dessert crêpe is served warm with gooey Nutella practically bursting out of it. Saltchuk Pies offer a selection of savoury or sweet pies made in the Australian/New Zealand tradition. The crusts are hot and flaky, and the varieties are unusual including the steak and black bean, or lentil and vegetable.

Started earlier this year, Phoebe’s Ice Cream is the newest ice cream truck in town. It is a family-run company named after the family’s St. Bernard, Phoebe. Mostly focusing on traditional flavours and sundaes, you can also get your ice cream in a tiny HarbourCat-themed baseball helmet. Finally, it wouldn’t be a classic baseball game without standards like Boston Pizza’s pizza by the slice, or Wilson’s mini-donuts. 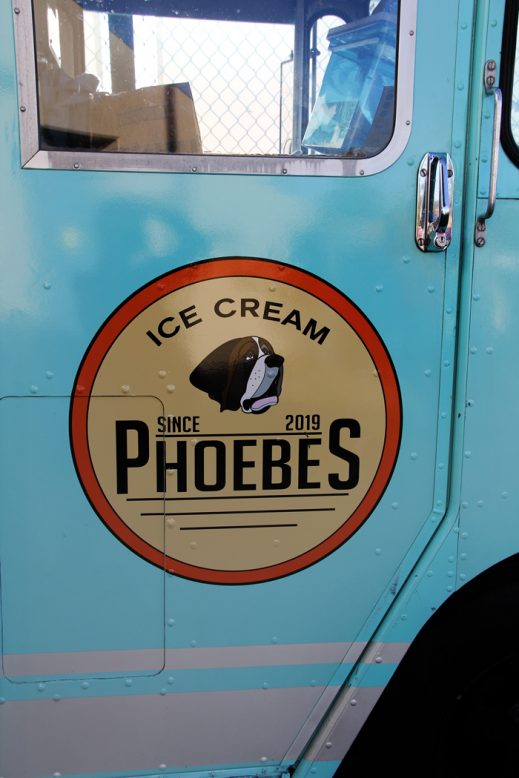 Not looking for a meal but still want something to wet your pallet? You’ll find a selection of beers and ciders at the park. After partnering with Red Arrow Brewing Company, you can even find the Cat’s very own branded HarbourCat’s Ballpark Blond Ale.

If (somehow) you’re still not satisfied with all the options for entertainment and food selection, you don’t have to despair just yet. Ballparks are no longer just places to watch the game. Axe and Grind (an urban axe throwing range downtown) are set up in a temporary caged area where you can try your luck at being a lumberjack for a few minutes. WildPlay has a zip line set up from which you can to get a unique view of the game.

The day had started with considerable fanfare including a Cyclone Helicopter completing a fly by and four skydivers descending with smoke trails in their wake. But as the sun began to dip and the backdrop of the game turned from striking blue to crimson skies, the HarbourCats did not emerge victorious in their first home game of the season. Despite the energy and collective hopes of their loyal fans, the Corvallis Knights managed to squeak out a 2-1 victory over the Cats. Even if the team did not emerge with the storybook ending some might have hoped for, it was a good night regardless—spending an evening in the park, under the sun, and with a selection of food, beer and entertainment.

November | December issue on the stands. Read ...
Read More
For the ninth year in a row Rancho Vignola is setting up its Vancouver Island Harvest Sale here at the Mary Winspear Center in Sidney. Many of ...
Read More
Season’s Greetings EAT readers! We at EAT are looking forward to all the wonderful seasonal baking on offer around the city. One of the great joys ...
Read More
Masterclass Candied Citrus Holiday ...
Read More
What started in 1993 as the humble Espresso Fantastico coffee cart in the Inner Harbour has now turned into a mini empire of ethically procured ...
Read More