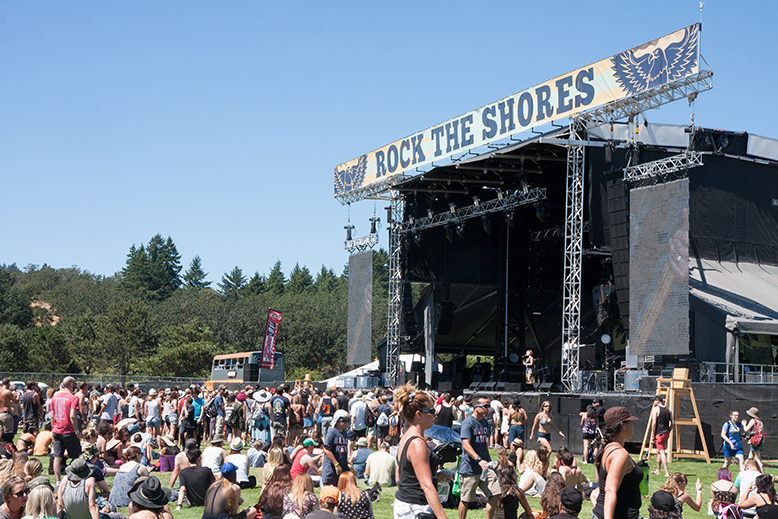 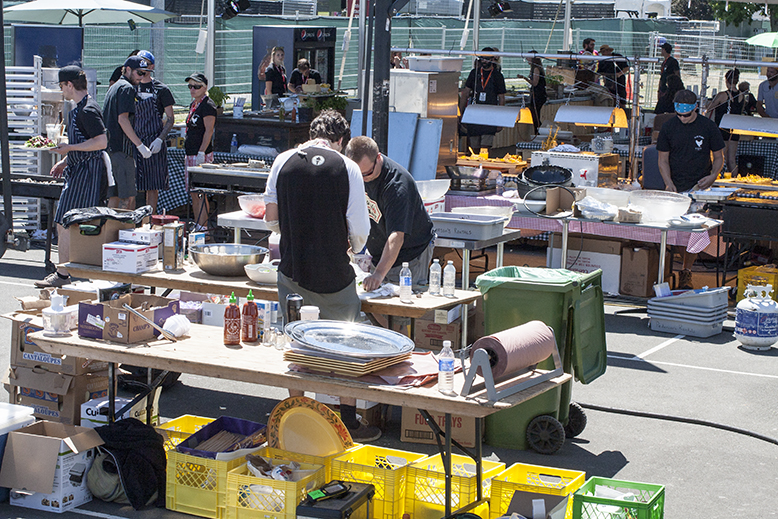 The scene behind the scenes at Rock The Shores

All this and more sat on a concrete field within view (and certainly within earshot) of the 2015 Rock the Shores backstage. And though the 10,000 plus attendees were already scouting the legion of food trucks on site, this exploded restaurant kitchen had its own special clientele to serve: the artists and official crew, all 2000 or so of them.

“The vision here was to provide an experience,” says Chris Jones, co-owner at the Ruby Diner and maestro of this catering event. “There’s only one thing I’ve seen like this in North America. We went out to Osheaga, 40 thousand people, to see what Chuck Hughes does. If you have gourmet, high level food at a festival and you show it to the artists, that’ll put Victoria on the map.”

The perception of the music industry is that your tour bus and green room are always stocked with a plethora of near-endless crudités and ham and cheese sandwiches. It all sounds great until you finally hit that career milestone and realize that invariably some poor stage manager, with minutes to spare, has rustled up the most basic, dry, industrially catered crap that wouldn’t be out of place in one of those turntable vending machines. And summer music festivals, with their sky-high attendance numbers and limitless other responsibilities to manage, are no different. “We know they struggle with this, it’s always an afterthought.” 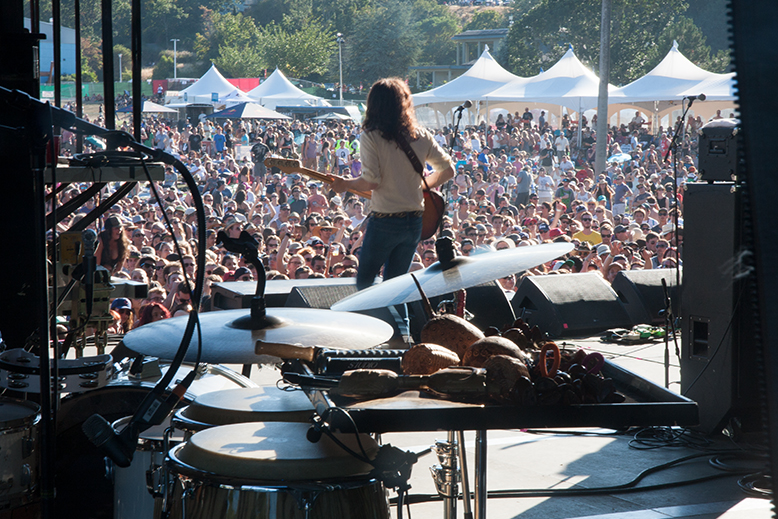 Chris and his business partner Josh Goyert are now in their third year of attempting to turn that trend around on the West Coast. Since 2012, they and their team of professionals have provided amazing, made-to-order food for the Rock the Shores event, cooking everything on-site. “The idea here is to pull something like this off a la minute,” says Chris. “There’s no food coming from anywhere else right now. This is the cooking line in the restaurant, that’s the prep kitchen, that’s the dish pit, refrigeration, that’s all here, there’s no offsite stuff.” 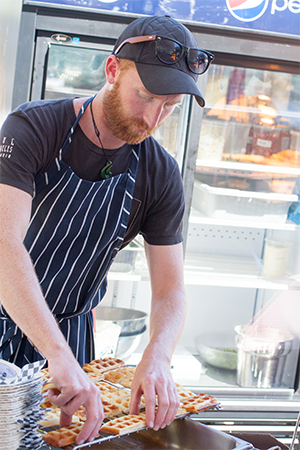 It’s surprising how many ingredients can be made from scratch with enough commitment. From the 80 dozen Portuguese buns made fresh the night before, to the Ruby’s own house mild hot sauce and green sriracha, to the 100 litres of gravy reduced from the drippings of the restaurant’s constantly-turning rotisserie. The team’s commitment to fresh local ingredients also means 60 dozen Little Wing oysters from Desolation Sound, likely the last major batch before red tide. With a week of prep beforehand and a mountain of food to cook all weekend, it’s a punishing schedule. “We got our first order 7 days ago; I’ve got 45 people, cooks and front of house,” says Chris. “I went to bed at three and I was up at six. That’s my little house back there for the week,” he says, pointing at an RV parked at the edge of the second court. “My camping for the summer, glamping at Juan de Fuca.”

The food court also boasts an espresso bar staffed by The Ruby’s long-time collaborators, Discovery Coffee. “We’ve been here for the past couple years with them as well,” says offside manager Alice Maddox. How much coffee do you go through? “Probably about 50 lb. of espresso, then we have 19 litres of cold brew per day.”

A big, complicated event like this requires a team of pros, which Chris has gathered from kitchens all over Victoria—Josh Poole of the Rialto and Pescatores, Jesse Cole of Little Jumbo and the Laurel Point Inn, Bobby Bridger of the Cactus Club, and Shannon Meeker of the Broken Paddle Café to name a few. “This is what we do,” says Chris. “Everyone out here is here for love, there’s not a ton of money involved in this, it’s just a really cool thing.”Chris and his team also work with Atomique Productions on the Phillips Backyard Weekender and Rifflandia, but his dream is to use Rock the Shores to showcase the best of festival catering.

“To be honest with you, what I would really like is for every festival organizer in the country to see this, because we’d like to put all this on a semi and roll around all summer to different festivals and do this. We’d love to do Sunfest, we’d love to do Pemberton, and we’d love to do Squamish and Sasquatch, all those festivals. If we had the opportunity to take this on the road, that’s how we would spend our whole summer.”

Later that day, Chris pulled me over while talking to Deb Beaton-Smith, Rock the Shores’ Director of Artist Administration. The Black Keys’ tour manager had just walked into her trailer and said it was the best catering of any festival they’d been to. “And they’ve been to Osheaga,” said Chris, beaming. “We heard the same thing from Weezer [last year]. ‘We’ve been on the road for 25 years and this is the best we’ve had,’ they said.”

See the photo gallery and the menu below

Charcoal roasted porchetta on a bun

The article on L’Apéro in the May|June issue should have stated Chef Andrea Maiolo staged at The Courtney Room and Zambri’s and that he held the ...
Read More
May|June issue on the stands. Read ...
Read More
Last Monday (April 26), Terroir Symposium, Canada’s most influential gathering of the biggest and brightest culinary minds, celebrated its 10th ...
Read More