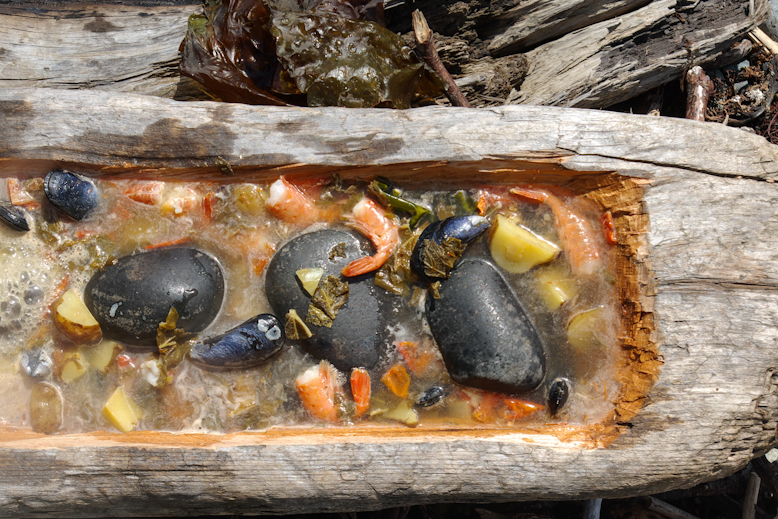 Ocean front dining doesn’t get more authentic than this, thanks to Chef Tom Kral (a.k.a. Nature’s Chef) and his knowledge of wild, edible food. I’m sitting on a beach somewhere in Sooke, watching Kral prepare me an almost entirely foraged meal.

As a private, holistic chef, he caters to his client’s needs; in-home, outdoors, hiking, or camping—whatever the setting might be, Chef Kral offers a unique dining experience. His ingredients are basic, pure, and either wild or locally produced. 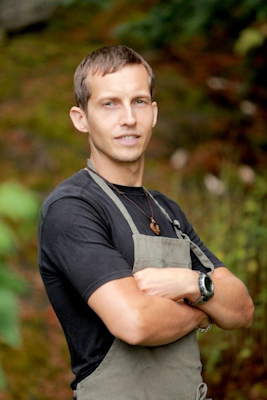 Kral comes from long line of chefs. Growing up in the Queen West area of Toronto, he was immersed in the food industry at an early age. His family has been operating the successful European deli, The Prague, since 1968.

At the age of sixteen Kral was introduced to Master Chef Susur Lee, a friend and client of Kral’s father (a respected meat smoker and sausage maker). Kral went to work for Lee in his restaurant, where his passion for cooking flourished. From there Kral apprenticed under John Higgins of the King Edward Hotel and received his Red Seal certification.

It was after a trip to connect with his cultural roots in the Czech Republic that Kral’s passion for cooking soared. He returned to Toronto ready to take on the family business. By the age of twenty-five, Kral was the third generation head chef and owner of The Prague, working hard to maintain its long-standing reputation.

“We were known for hearty, rustic foods, specializing in traditional Czech cuisine like roast pork with dumplings, sauerkraut, sausages, schnitzel, and goulash. After seven years, I started to gain weight and didn’t feel like myself. That’s when I started looking into healthier foods free of meat and dairy. It spurred an entire shift in my cooking.”

Relocating that innovation and culinary background to Vancouver Island, with access to local farms and wild, west coast foods has been a dream for Kral. While his roots in traditional cooking have remained intact, as has his deep appreciation for quality dining, Kral now focuses on health and longevity. He is passionate about feeding his clients pure, natural, and wholesome foods as wild as they will allow.

“I can design a menu that will leave a client free to relax in the comfort of their own home, or outdoors if that suits them. Depending on what’s in season and what the client wants, I go above and beyond what many restaurant menus can. I’m flexible and adaptable both indoors and out.”

Watching him cook over an open fire, using the traditional hot rock method to prepare a fresh bouillabaisse, I can see I’m watching a well-trained chef; he’s calm and confident and in his element—barefoot on the beach.

He serves me up a bowl of the bouillabaisse loaded with fresh caught (a mere 10 feet away from me) mussels, clams, oysters, bull kelp, and local spot prawns. Along comes a slice of warm spelt and buttermilk bread that he has wrapped in skunk cabbage leaves and baked on top of the rocks. I’m offered a cup of wild tea made from licorice fern root, spruce tips, nettle, and horsetail while nibbling on homemade maple blossom and kelp chips. To finish off the meal, Kral produces a vegan, raw strawberry and rhubarb pie. The only thing missing at this point is my tent and sleeping bag. 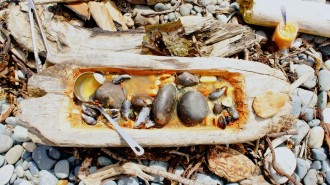 November | December issue on the stands. Read ...
Read More
For the ninth year in a row Rancho Vignola is setting up its Vancouver Island Harvest Sale here at the Mary Winspear Center in Sidney. Many of ...
Read More
Season’s Greetings EAT readers! We at EAT are looking forward to all the wonderful seasonal baking on offer around the city. One of the great joys ...
Read More
Masterclass Candied Citrus Holiday ...
Read More
It’s a crisp January morning. Stewart Orr wears a pressed white shirt, sleeves neatly rolled past his elbows, a plaid tie and a striped apron. A ...
Read More