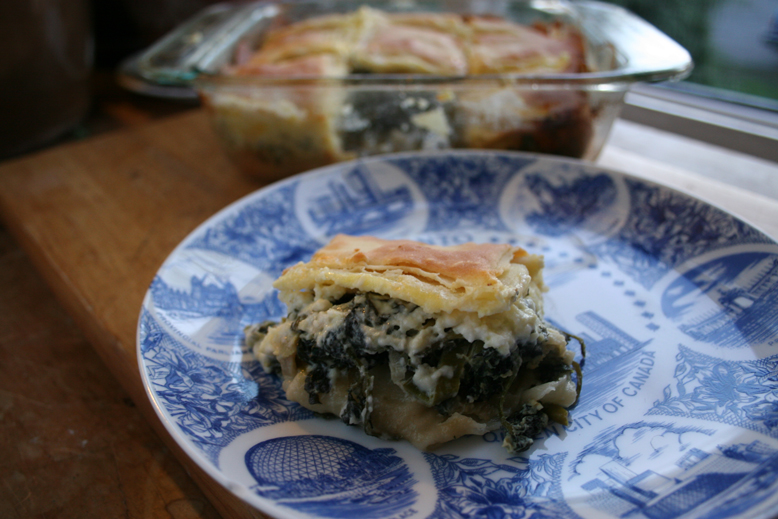 For reasons that would take too long to explain, I ended up with about ten pounds of feta cheese last week. Because of this, I decided to work my way through as many Greek salads and other Greek-themed recipes as I could before the cheese went bad. One of the fun ones I tried was homemade spanakopita. Spanakopita is a spinach and feta pie with a phyllo pastry crust. I decided to try to make the phyllo myself. You can easily buy premade phyllo from the supermarket. Buying it premade would certainly be the more sensible course of action, because making it is kind of a thing.

In addition, because it is nettle season, I went with Katie Sage to pick nettles and use them as a substitute for spinach in the recipe. Again, you could easily buy spinach from the supermarket, and its cooking instructions are the same as for nettles. Moreover, nettles are not referred to as “stinging nettles” for nothing. They actually produce instantaneous and somewhat painful stings on contact with human skin. The pain goes away after a few minutes, but it still isn’t that pleasant. We picked the nettles with gloves on, and that helped a lot, but not totally. The stinging goes away once the nettles are dry, or exposed to cooking heat. After this, they provide a delicious, nutritious, and local edible for whatever dish you like. In addition, they grow rapidly and abundantly, so it’s easy to collect them en masse while they are in season. 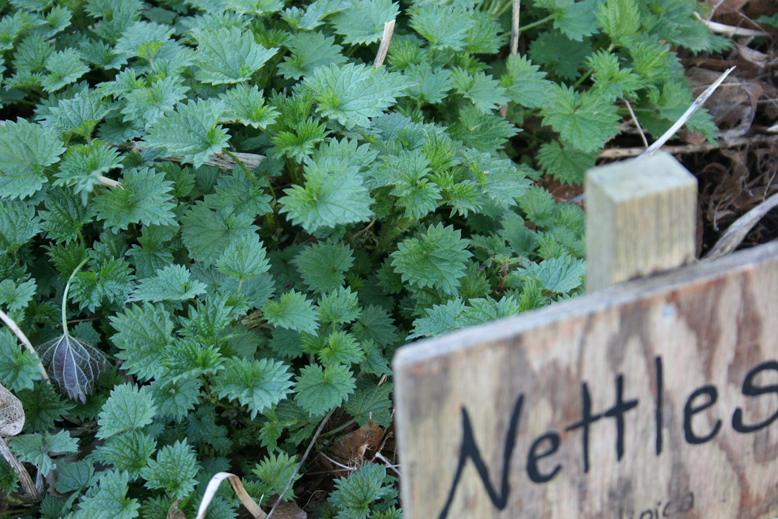 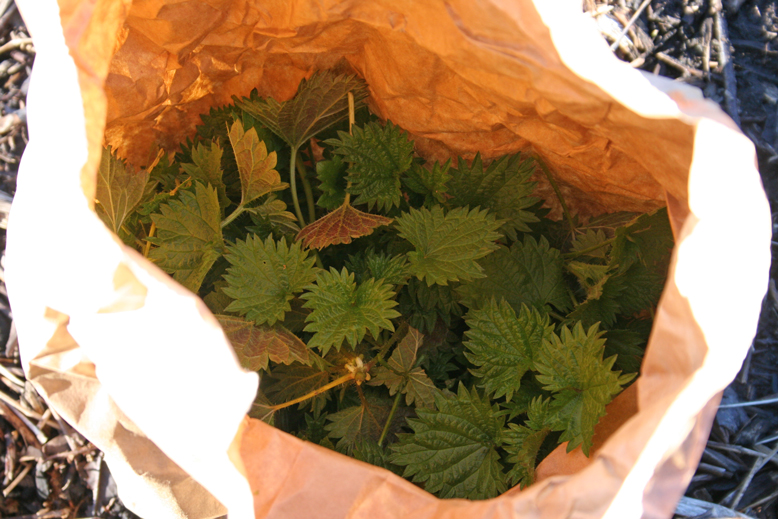 Ingredients for the phyllo: 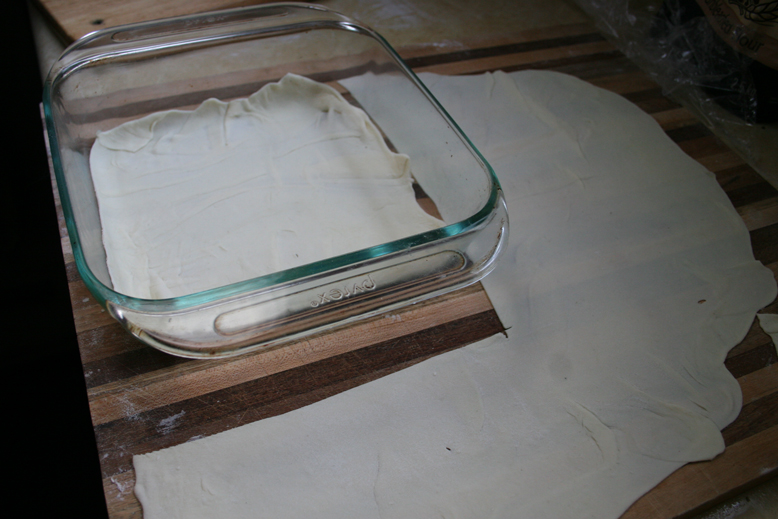 Ingredients for the filling:

Note that this is approximate. It doesn’t actually matter how much filling you have, as long as you have a reasonably thick pie.

Instructions for the phyllo:

In exactly the same way as I described making chapatti dough is how you should make this dough. The difference is that once it is mixed and kneaded, the dough should sit for an hour and then be rolled out. It is quite elastic and the idea is to roll it as thin as possible. This can be achieved by dividing the dough into four hunks, rolling each flat, then cutting each in half again and rolling each even thinner. The thinner you can make it, the better. Professional phyllo is like paper and this makes for the flakiness of the crust. 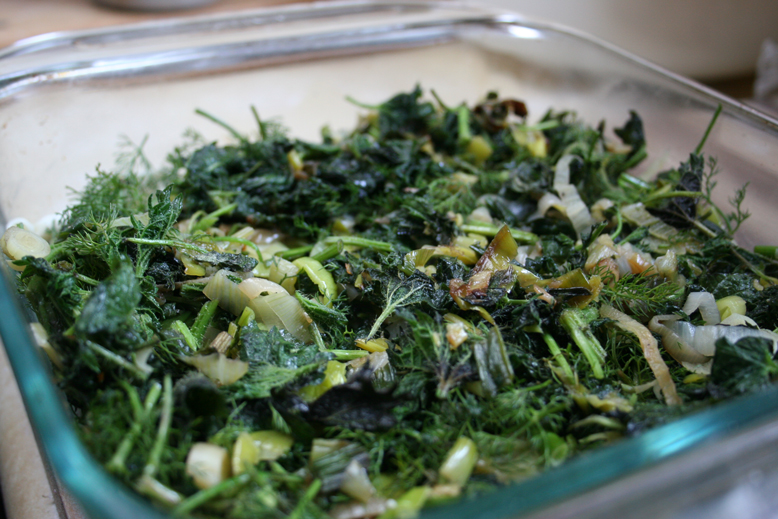 Instructions for the filling:

Lightly caramelize the onions and leeks in a pan on medium low heat and add the chopped nettles. I just let the nettles cook a little, so they retained their greenness. After all, they still had to bake. Next, I took this mix from the pan and added the chopped dill and oregano to it.

Crumble up the feta and add the eggs to it. I then added the nettles to the feta mixture, mixing well. 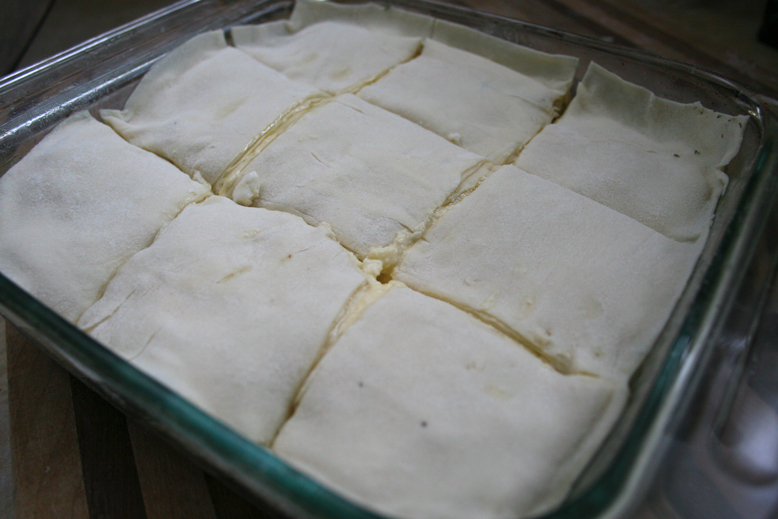 Put it all together:

Preheat the oven to 350F

Place a sheet of the super thin dough in a lightly greased baking dish, and then paint the top lightly with oil. Then lay another sheet or two on top of that, oiling between each. Layer the filling evenly on top, and then add three or four more sheets of dough, all oiled in between. Paint a little oil on the top layer to help it brown. Bake until cooked through and the top has achieved a golden colour, about 45 minutes.

Important. Be sure that you cut the pie into squares before you put it in the oven, as phyllo is hard to cut after it is baked. Take a sharp knife and cut the squares all the way to the bottom. It will make your life so much easier.

It was very tasty, but I would say I have to work on the flakiness/thinness of the phyllo dough. I expect the next one to be better, as I still have a lot of cheese to work with. Plus, nettle season is still going.

The article on L’Apéro in the May|June issue should have stated Chef Andrea Maiolo staged at The Courtney Room and Zambri’s and that he held the ...
Read More
May|June issue on the stands. Read ...
Read More
There were few bar mitzvah brunches in Vancouver that didn’t feature a fresh crop of bagels. Their twisty, chewy, bready platforms bore liberal ...
Read More