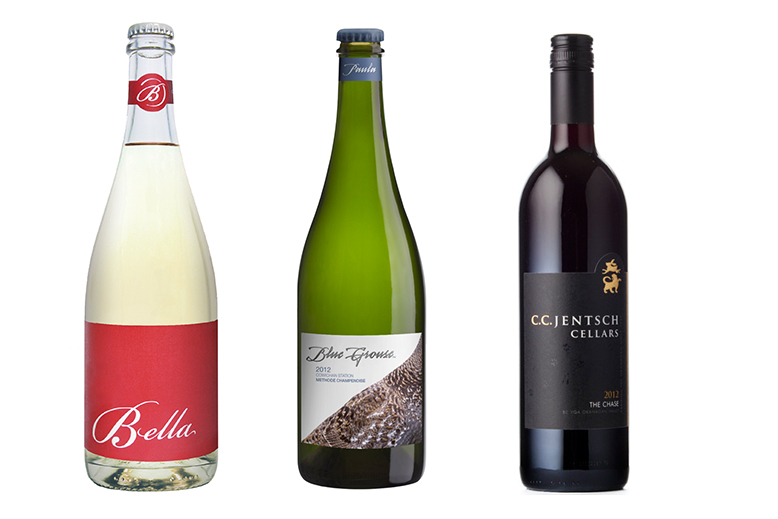 New Year’s almost here. Leave the Christmas excess behind, grab a bottle of BC wine and celebrate.

Fizz. We all need more fizz in our lives – ideally every day, but definitely at New Years. BC has some great options. Two wineries that grabbed my attention this year are Bella in Naramata and Blue Grouse Estate Winery in Cowichan Valley.

Bella Sparkling Wines’s owner and winemaker, Jay Drysdale, is passionate about his bubbles and the winery only produces sparkling wines from Chardonnay and Gamay Noir. All the dry wines are made in the traditional method (think Champagne), but each is site-specific and Drysdale captures the voice of the vineyard in each bottle. My favourite is the 2013 Oliver West Side Chardonnay; it’s crisp and elegant, with baked apples, citrus notes and subtle toasty notes. Available at private liquor stores at approximately $25.

Blue Grouse Estate Winery has been around since the 1990s, but Paul and Cristina Brunner bought the winery in 2012 and have made significant investments in the winery and tasting room. With its stunning architecture, a visit to the winery should be on your to do list. Thankfully, it’s not just about the architecture – the wines also hold their own. The 2012 Paula is a traditional method sparkling wine made with estate-grown Pinot Gris, Ortega, Muller-Thurgau and Pinot Blanc. It shows a lovely complexity of ripe pears, white flowers, citrus and spices balanced with gentle savoury notes of toast and mushrooms. Available at private liquor stores at approximately $30.

Aromatic white fans should look to Sea Star Vineyards on Pender Island. 2014 is only the second year that wines have been released, but Sea Star has already established a reputation for wines that are fresh, crisp and loaded with fruit. My choice is the 2014 Sea Star Salish Sea, which blends Gewurztraminer, Pinot Noir, Pinot Gris, Riesling, Oretga and Schonberger into a wine that screams with peaches, apples, pears and roses. Available at private liquor stores at approximately $24.

My surprise red find this year was the C.C. Jentsch Cellars The Chase 2013 from the Golden Mile Bench in Oliver. It’s a Bordeaux blend with just under a third each of Cabernet Sauvignon, Cabernet Franc and Merlot, plus a hint of Petit Verdot and Malbec. It shows blackcurrants, chocolate, spice, espresso and black pepper with ripe, fine tannins and supporting acidity. I tried it when I was judging at Gold Medal Plates this year and was excited by the structure and depth of fruit – especially at the $19 price point. It took silver place, losing out to the 2012 Foxtrot Vineyards Henricsson Vineyard Pinot Noir, which is a super silky, ripe, sleek wine, but is significantly more at around $50 per bottle. The Chase definitely over-delivers for the price. Available at BCLDB and private liquor stores.

Whatever you have in your glass for “the bells” at midnight, say a loud cheers to 2016. It’s going to be a great vintage. Slàinte!

November | December issue on the stands. Read ...
Read More
For the ninth year in a row Rancho Vignola is setting up its Vancouver Island Harvest Sale here at the Mary Winspear Center in Sidney. Many of ...
Read More
Season’s Greetings EAT readers! We at EAT are looking forward to all the wonderful seasonal baking on offer around the city. One of the great joys ...
Read More
Masterclass Candied Citrus Holiday ...
Read More
As I said when I was writing an article on donuts the other day, I once in my foolish youth exposed my heart to an older woman from the Korean ...
Read More