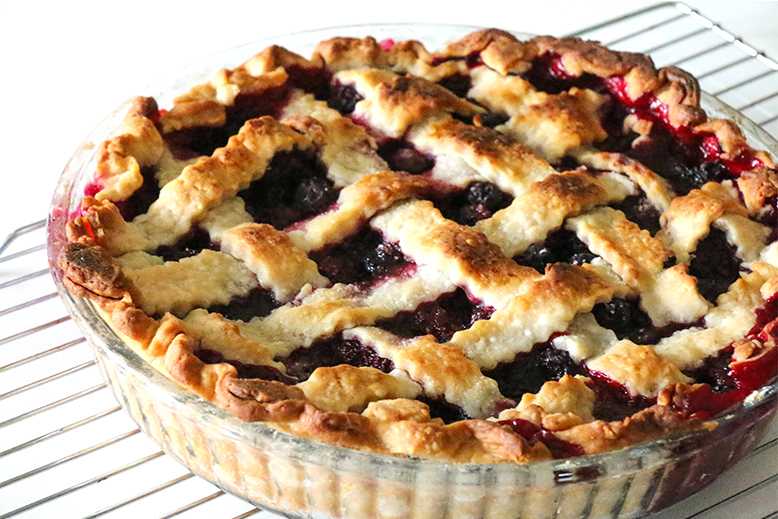 This recipe is from “Keep Your Fork—There’s Pie” written by Cinda Chavich for the July/Aug issue of EAT.

No Fail Pastry (with Lard)

Place flour and salt in a bowl. Use a pastry blender to cut half the lard into the flour until fine and crumbly. Add remaining chopped lard and cut in with the pastry blender, just to the size of small peas.

In a measuring cup, whisk the vinegar, egg and enough ice water to make 1 cup. Slowly add the liquid to the flour mixture, whisking with a fork, just until the dough begins to cling together. Work the dough as little as possible to avoid developing gluten (the reason pastry gets tough).

Gather quickly into a ball. Divide into six equal portions. Wrap each in plastic wrap and refrigerate until cold. Makes six shells or three double-crust pies.

Building a Fruit Pie
Roll out pastry on a lightly floured surface.

Transfer to a pie plate and trim the excess. Brush bottom crust with a mixture of egg, flour and milk (a light roux) to seal. Toss fruits with a little flour, sugar and spices. Fill pie (mounding fruit). Wet edges of pastry. Top with pastry and press or flute to seal, then bake.

Don’t reroll scraps—blitz with a little egg or milk to form a “liquid pastry” to seal the base.

The article on L’Apéro in the May|June issue should have stated Chef Andrea Maiolo staged at The Courtney Room and Zambri’s and that he held the ...
Read More
May|June issue on the stands. Read ...
Read More
“Artisan and farmstead cheeses take centre stage at this 3-day Sonoma Valley festival.” Walking into the ballroom of the Sheraton Sonoma ...
Read More