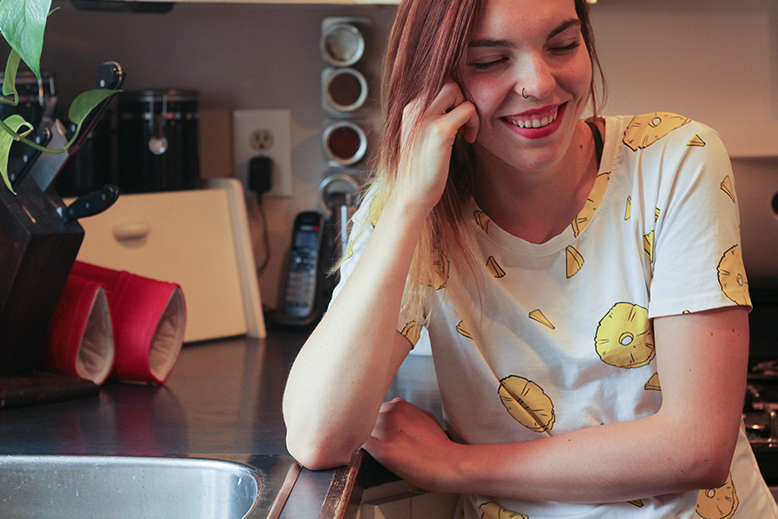 Leah Moldowan was one of my first best friends. We met at Sparks (introductory Girl Guides with pink sweaters and all). She was that friend whose house I could wander into at two in the morning to steal some pita bread, and whose phone numbers I always knew off by heart. That’s why I was the first one of her peers to notice her skeletal hands when we were 16.

Now, in the middle of 2015 in Victoria, B.C., I watch the same dainty hands stir unsweetened applesauce into coconut and buckwheat flours. No measuring cups, no tablespoons—all her recipes are original and she knows them off by heart. Today, we are making a layered chocolate and vanilla-cherry minicake, a small dessert for one. Her kitchen is always dimly lit. Cupboards are stacked to the top with one-of-a-kind dishes and platters for her food. It smells of fresh vegetables usually, but this afternoon the kitchen has adapted a sweeter smell.

Leah’s knowledge about vegan food is what is driving her brand, Love Me, Feed Me, to online success. However, the way she acquired that knowledge is a little different.

In late 2011, her junior year of high school, she followed what books, TV shows and doctors preach as the key to health—eat natural foods and exercise. She did this for weeks when her stepfather suddenly passed away due to heart failure in March 2012. This led Leah to put full attention into all she knew at the time, the healthy lifestyle, and by the beginning of her senior year, Leah had unknowingly gone too far. What she thought to be orthorexia, but found out recently was anorexia, crept its way to her brain through her hands stirring whole wheat waffle batter, through her eyes scrolling past recipes, through her tongue, where small pieces of freeze-dried fruit melted away, calorieless. These melts were Gerber Graduates—baby food. She hid them from me until I saw them one day poking out between steel utensil holders in her kitchen.

Her daily routine became a self-isolating routine she had given herself. She had to count the calories in her meals, she had to plan those meals a day in advance, she had to work out—and she was not to eaten certain foods. For one, she avoided bananas in fear of their sugar. Throughout this time, Leah had begun an Instagram on which she posted pictures of the food she was eating, captioned with the ingredients and often their calculated calories.

By twelfth grade, we couldn’t share clothes anymore; now at 18 she was less than half the size of her preteen self. One day a school councillor pulled her aside and told her one of her teachers was concerned for her health. It finally clicked that she was dealing with something big. She wasn’t yet sure what to do about the disorder, but she could finally recognize its presence in her thoughts. She moved with her mother to Victoria, B.C. around the very same time as I did for university in September 2013. A fresh start.

Her followership on Instagram continued to climb and soon enough, instead of trying out the recipes of other healthy Instagrammers, she began to create her own.

Then, she made a spontaneous decision: Leah would backpack across Europe with two of her best friends in early 2014. This trip free of boundaries and rules put her in the perfect situation to shake free her muzzle of anorexic behaviours. Seven months after moving to Victoria and two years of suffering from disordered thoughts, she felt freed:  “I was really able to get better in removing myself from everything that was toxic to me,” Leah says. “I started to realize there were things important to me other than health and fitness, like friends and traveling.” She hopes to travel Asia next. 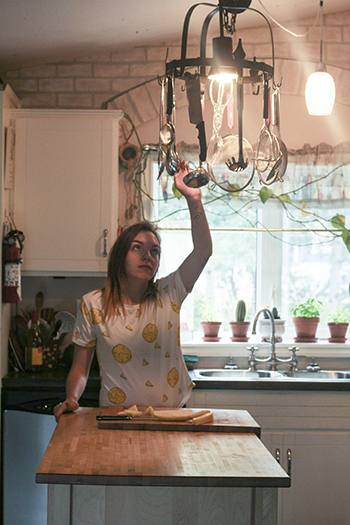 Her ability to control her eating disorder has led to several young women messaging Leah to ask for her advice and to share experiences. “Sometimes I just want to forget that it ever happened. But, the fact that I can help raise awareness with it and I can make even just one person feel more normal or better or inspired to try to get better, it makes it all worth it,” she says, a smile spreading like icing across her face. Her Instagram, LoveMeFeedMe, currently sits at 8, 343 followers.

Now she’s got a regularly updated blog featuring original recipes. Her current goal is to get her vegan foods into the Victoria Public Market. She’s already been approved; all she needs is to settle on the perfect menu.

Her dream, though? A food truck. “Now I realize I have what I want to do in my head and I’m actually working for it,” she says. “I have the power to do what I want.” She would name the food truck after her brand. A fellow food blogger, Kimberly Capella, (Pbeechie on Instagram and (www.thecoconutdiaries.net) deems this the perfect choice for what Leah offers. 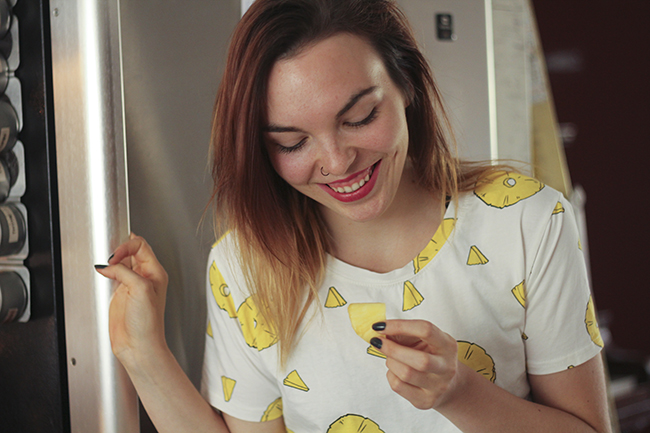 Only once Leah turned to plant-based vegan foods, found her love for travel, started up her new brand and began actively pursuing her dream of sharing her food with the public has she been happy and fulfilled. “It was almost immediately after reaching this level of inner peace that Leah re-invented herself to Love Me, Feed Me,” says Kimberly. “Her name before? EatSweatRepeat. So you can see 100 percent the turn-around of her views on food and its importance in life. It went from eating and burning off calories to using food to love for your body and nourish yourself,” she says. Kim believes Leah is helping others see the importance of healthy food and mindset: “One recipe at a time.”

After all the time that has passed and all the struggles and transformations Leah has made it through, we sit across from each other at her dining table. Black and tiffany blue Love Me Feed Me stickers are strewn across it. She is a woman compared to the girl I have known for most of my life. This woman no longer counts calories. This woman works at Café Bliss after applying five times. This woman has created her own small business out of the very material that caused her to lose control of herself, healthy food. The same woman who taught me to hold my breath when I sneeze ten years ago is now teaching me to love myself—both by example.

Note: Leah is now selling at the Victoria Public Market on Wednesdays.