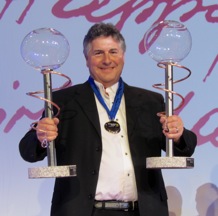 Canada’s Okanagan Spirits Craft Distillery wins 12 medals including “Distillery of the Year” and “Spirit of the Year”, and is awarded the coveted “World Class Distillery” designation at 2013 Worlds Spirit Awards

MARCH 18, 2013 – Okanagan Spirits Craft Distillery has achieved the pinnacle of achievement in the world of craft distillation by winning “Distillery of the Year”, and “Spirit of the Year” along with the “World Class Distillery” designation at the 2013 World Spirits Awards held in Klagenfurt Austria.

These awards and classifications add to Okanagan Spirits already comprehensive list of awards and accolades at this international spirits competition, but according to their Master Distiller, Peter von Hahn, “This level of recognition puts us along side a very elite group of world class distillers who are the superstars of the industry“.  “It was an amazing honour a few years ago, when we became Canada’s only Master Class Distillery, but to surpass that this year with becoming North Americas only World Class Distillery, and being named the World Spirits Awards “Distillery of the Year”, is simply astounding.”

In order to achieve this top honour at the 2013 World Spirits Awards, Okanagan Spirits Master Distiller Peter von Hahn needed a gold medal sweep across a full category, which would mean five gold medals out of five spirits entered in a particular category of alcohol production.  But he didn’t stop there!  In fact von Hahn went on to win Distillery of the Year, Spirit of the Year and medal with all 10 of his B.C. Fruit made spirits that he entered, claiming one double gold medal, four gold medals, and five silver medals for his products spanning Liqueurs, Eau de Vie Fruit Brandies, Aquavit and Absinthe.  In fact, Okanagan Spirits Black Currant liqueur was given the highest points score ever given to a product at the World spirits event.

“I had previously stated that we needed to dream big to achieve success at an awards event of this caliber, and I guess that big dream came true, placing us directly on top of the world stage of craft spirit production.” Said von Hahn.

The article on L’Apéro in the May|June issue should have stated Chef Andrea Maiolo staged at The Courtney Room and Zambri’s and that he held the ...
Read More
May|June issue on the stands. Read ...
Read More
Today pâtisseries all over the world are putting their best macaron forward to celebrate Macaron Day. Here in Victoria Bon Macaron Patisserie is ...
Read More