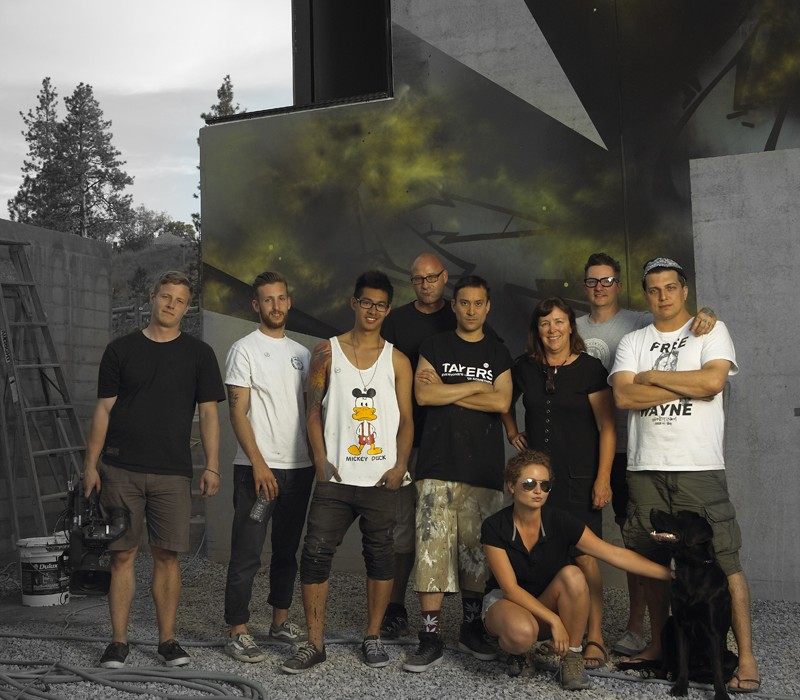 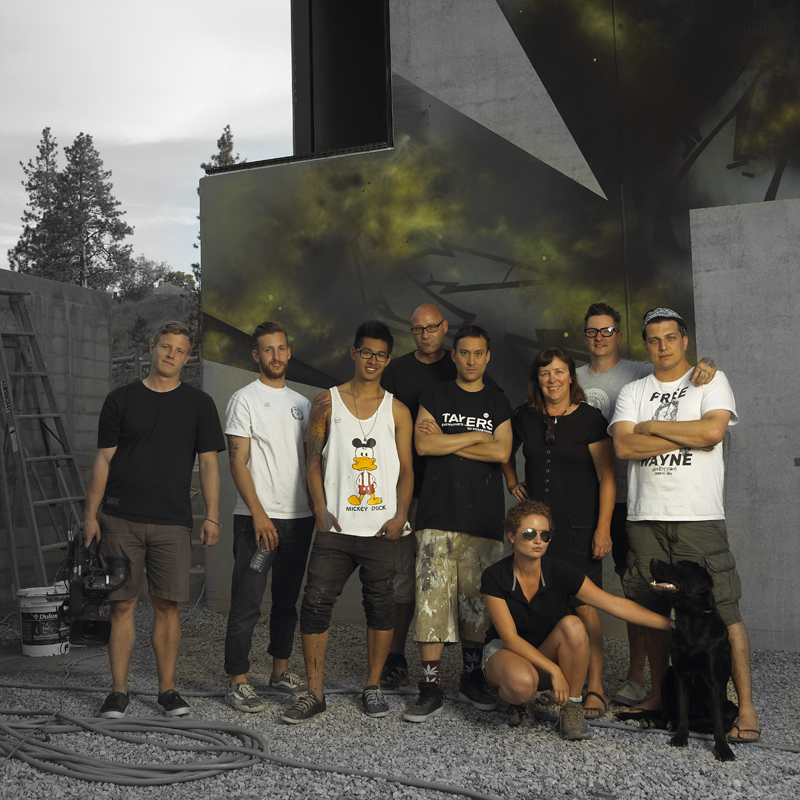 [Summerland, BC] August 29, 2011 Okanagan Crush Pad winery owner Christine Coletta has always been fascinated with street art. Recent trips to Santiago and Valparaiso in Chile planted an idea to include the art form on the smooth concrete exterior walls of her under-construction winery—the perfect canvas. In April she cold-called Robert Squire, curator of Catalog Creative in Gastown, with the opening line, “You might think this is an odd request but…”

Squire spent the first part of the conversation trying to talk Coletta out of her idea. “This isn’t at all the image of Okanagan wine country,” noted Squire.

“Exactly,” replied Coletta, and the two set about planning.

Squire and his team at Catalog Creative are part of Mark Brand Inc., a company that has set about transforming Gastown one business at a time. Brand is a partner in several businesses including Boneta, The Diamond, Sea Monstr Sushi and the recently opened Save-On-Meats. Coletta appointed business partner and architect Brad Tone to work with Squire and Brand to coordinate the graffiti-inspired mural installation, and on August 7 artists Robert Squire, Scott Sueme, Dan Climan, Alex Usow, and producer Mark Brand descended on Summerland for five days. For some it was their first trip to the Okanagan, and time spent adorning the winery walls was balanced by time playing in Okanagan Lake.

“There couldn’t be a better person than Brand to oversee the project,” said Tone. “He lives and breathes Vancouver urban life at its roots.”

Dozens of cans of spray paint later, three artful and inspiring panels have been painted at Okanagan Crush Pad. “I would describe the mural as the place where contemporary art meets street art,” says Squire.

The markings have been done in a colour blocked style that comes from 1930s industrial design concepts. The bold exterior mural is done in what is a Dazzle art style, layered with letterforms that pull from the influence of graffiti and colour palates that draw from the surrounding landscapes. The style of Dazzle is geometric, with modern intersecting shapes and bold, contrasting colours. In this instance, the Catalog Creative team used large scaled graphic blocks, partially created with the negative space of the concrete surfaces, to anchor layers of colour and form inspired by the surrounding landscape. The expression is a unique experience.

“I am very happy with the work,” says Coletta. “We really wanted to have the artists interpret and express their first impression of the Okanagan Valley. How they chose to articulate that was left to the members of the team.”

As the construction of Okanagan Crush Pad continues, the team will be back to do some additional work on the interior, including a sculpture installation by Aaron Moran that artfully integrates the use of local materials, with the end result sure to be unlike any winery anywhere.

The article on L’Apéro in the May|June issue should have stated Chef Andrea Maiolo staged at The Courtney Room and Zambri’s and that he held the ...
Read More
May|June issue on the stands. Read ...
Read More
Started in 2010 by Jack Wessel and the Oliver Osoyoos wineries, the Half Corked Marathon was created as a fun run/jog/walk through vineyards, dirt ...
Read More