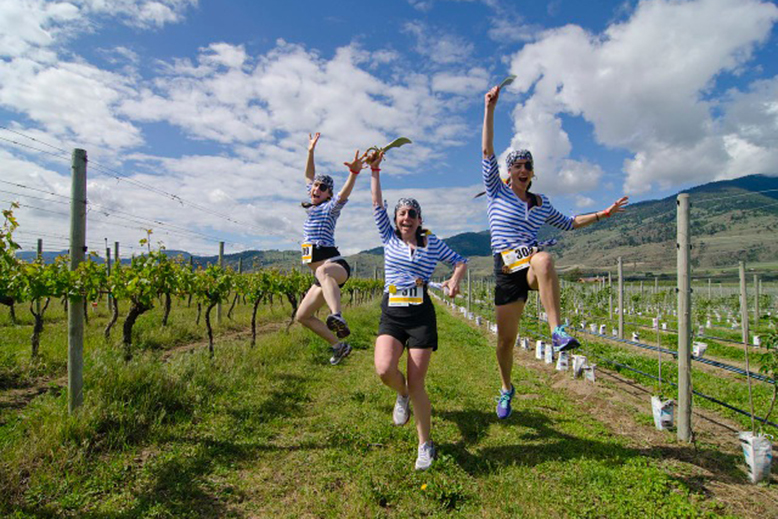 A totally foreign concept to non-runners, entering a lotto in hopes of winning the opportunity to buy tickets to run in a half marathon?! But the Half Corked Marathon proved such a popular event that organizers decided to allow entrants by a lottery system, akin to famous marathons worldwide (NYC and Boston among them). Previous years have sold out in mere minutes, prompting the Oliver Osoyoos Winery Association to adopt this new system for the 650 tickets available.

This morning general ticket lottery registration opened for the fourth annual Half Corked Marathon, and will close on Friday, February 14 at 11:59pm. This scenic “fun” race through the wineries and vineyards of Oliver Osoyoos Wine Country will be held on May 24, 2014. Costumes are common, laughter is unavoidable, camaraderie is promised. Here is a clip from last year’s Half Corked Marathon : Half Corked Marathon 2013

Water is the usual liquid of choice for thirsty race runners but the Half Corked Marathon takes a different approach to refreshment (and this is where the FUN comes in); participants are encouraged to sample wines from the Oliver Osoyoos Winery Association along the route, paired with celebrated regional cuisine from local chefs, restaurateurs and café owners, as they run, jog or walk the 18km route. The route can be run in 1.5 hours or walked in 3 hours with a wagon shuttle available to collect any participants who need some help getting to the Finish Line Lunch and wine tasting – depending on your imbibing tolerance and metabolism as much as athletic ability, I presume. The race trail leads through the incredible surrounds of Oliver Osoyoos Wine Country and brings together the region’s winemakers, chefs and producers, all of whom whole-heartedly embrace the event with a dozen refreshment and wine tasting stations along the route,

Tickets for the marathon cost $139 per person. After sign up, each lucky person randomly chosen from the database will have the chance to purchase two tickets for the event. Tickets for additional weekend events (the popular pre-race cargo-loading Primavera! dinner, Finish Line Lunch and event shuttle) will be announced shortly.

“The Half Corked Marathon is all about having fun in the springtime sun,” says Jennifer Busmann from the Oliver Osoyoos Winery Association. “It’s a unique chance for us to showcase the beauty of the region and of course give visitors a taste of our celebrated wineries and the world-class local produce that can be found in the Oliver and Osoyoos region.”

Inspired by the legendary Medoc Marathon in Bordeaux, the Half Corked Marathon is an homage to one of Canada’s most decorated wine regions and is the celebration of two benches in particular – the Golden Mile and Black Sage Road.

July|August issue on the stands. Read ...
Read More
Ever wondered how to cook up a noodle bowl you thought you could only get at a restaurant? Or maybe you have made a few noodle dishes before, but ...
Read More